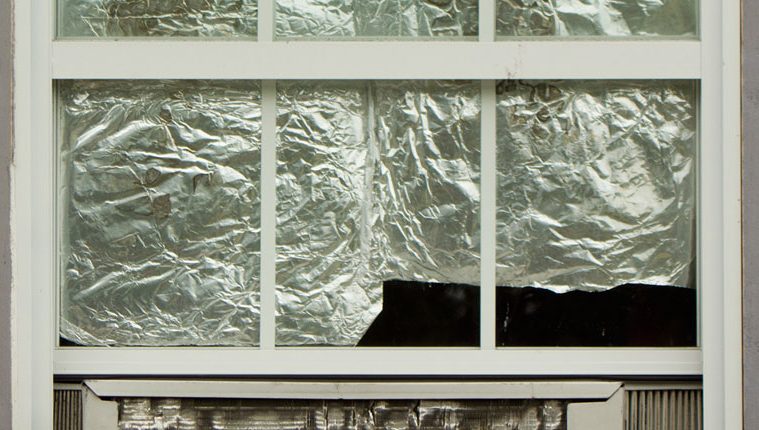 A common undergraduate exercise for architecture and design students tasks them with going out and taking pictures of “things used as other things.” Jack Lemmon’s character in The Apartment famously used a tennis racket to strain pasta, and I not so famously use an old sewing table as a desk.  Anyone living in an urban area is accustomed to seeing vintage buildings repurposed.  Former warehouses become lofts, and nearly any structure can become a restaurant.  The assignment enables young architects and designers to see their environments anew, and to identify simple acts of common resourcefulness.

For Clarissa Tossin’s project Blind Spot, currently on display at the Blaffer Art Museum’s downtown Window into Houston space, the artist was inspired by the local use of tinfoil as a window blind to block and refract sunlight.  To create the work, the artist photographed tinfoil lined windows in and around Third Ward.  Tossin digitally printed these photographs onto vinyl, and then crafted window blinds from them.  Installed, there are four blinds hung up in the former shop front windows of the museum’s Milam Street space.

One blind depicts a crisscrossing of painter’s and duct tape holding in one window’s tinfoil.  In another, a long sheet of smoothed foil is held in by smaller, crumpled pieces.  The enlarged, high-resolution images also reveal unexpected details, like a tiny spider or a rust stain.

Yet this is not to say that the work achieves anything akin to trompe l’oeil.  In fact, the photographs presented on the blinds are resolutely anti-illusory.  These are working roller blinds, and one can see the remainder of the vinyl, wrapped around the blind’s chain and cord mechanism, resting on the sill.  Panes in the photographs do not match up across the blinds, interrupting a visual cohesion between the work and the building.  Sticks and flora creep up the bottom edges of a few images, making them thoroughly out of place in the northeast corner of Downtown.

As such, Blind Spot stresses its functionality as a blind over artifice and unity.  In this work, images of tinfoil being used as window blinds become used as actual window blinds.  Things used as other things, to be sure.

In addition to Blind Spot, Tossin also has a show titled Study for a Landscape up through July 24 at Sicardi Gallery.  Here the pieces are more in keeping with her body of work as a whole, focusing on present day economic and land use concerns in Brasília, where she was born.  Her Study for a Landscape (Brasília) (2012) is a satellite image of the Brazilian city printed onto thick cotton paper, diagrammatically creased so that it can be transformed into a car.  The creases playfully make the image into a pseudo-topographic map, mimicking the bumps and crevasses of terrain.

But, by symbolically turning land into a car, this work references acts of deforestation and displacement that comprise many systems of global production.  This is especially potent commentary, as Brasília was a city master planned in the 1950s to be fully accommodating to the automobile, largely to the detriment of the pedestrian.

In Brasília by Foot (2009), Tossin maps 5 distinct journeys across a city park that largely discourages foot traffic, naming each piece after the amount of steps the walk took her.  Through documenting and quantifying her presence, Tossin legitimizes the off-road paths that are freshly tread everyday across the green space.  These works, much like Blind Spot, reveal Tossin’s preoccupation with how people mark the spaces in which they live.

Tossin’s keen attention to the objects and actions that constitute ordinary life is at once poignant and pointed.  Via Tossin’s perspective, the viewer also attunes to such “things,” and whether it is tinfoil or trodden earth, one is quickly reminded of the adage “necessity is the mother of all invention.” Limitations, both from physical space as well as finances, dictate many of the decisions we make about the places we inhabit.  Indeed, it would seem that invention continues to come from the most remarkably humble sources.

–KELLY MONTANA
Kelly Montana is an art historian and writer living in Houston.

Clarissa Tossin: Study for a Landscape
Sicardi Gallery
May 16-June 29