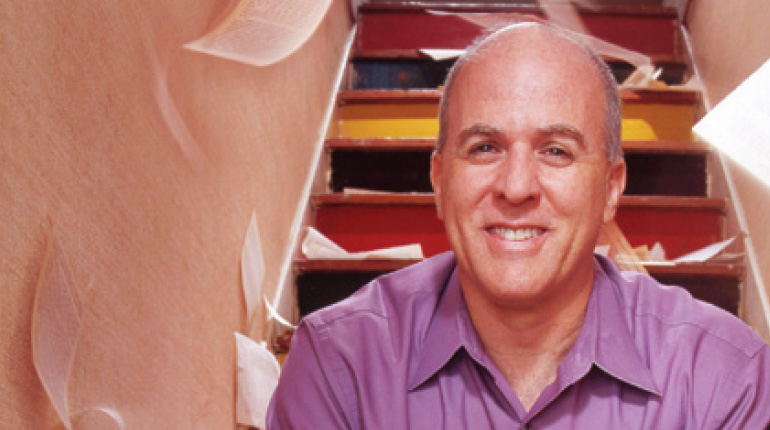 POET RICH LEVY HAS PRESIDED over Inprint since 1995. He holds a MFA in poetry from The Iowa Writers’ Workshop, viagra sale his writings have appeared in numerous publications, and in 2011, he was named Best Poet by the Houston Press.

With its popular Margarett Root Brown Reading Series, (where you can still hear a great author for $5), packed workshops, Cool Brains! reading series for children, grants to leading writers, Inprint is clearly the city’s leading literary organization, Recently, A + C editor Nancy Wozny visited with Levy on the porch of Inprint’s Menil area bungalow to catch up on the literary landscape.

A + C: What’s the secret to Inprint’s remarkable longevity and health as a cultural force in Houston?

RICH LEVY: One of the things that gives us stability is that we hew closely to our mission. We are a literary arts organization, we present literary writers — not historians or biographers (even though we love their work). We provide fellowships and prizes to emerging poets and fiction writers, we offer writers workshops in poetry, personal essay, fiction and memoir. Our board appreciates that consistency, and we are fortunate to have one of the best boards in the city — dedicated, generous, hard working. Plus, we have one of the best staffs in the city, small (there are just five of us), and four of us have worked together for more than 10 years. I think the organizations and folks who support us tend to appreciate our fidelity to mission and our dedication to excellence, to the highest standard of quality.

A + C:  How do you see Inprint in the overall ecology of Houston’s literary scene, especially its relationship with The Creative Writing Program at UH?

RICH LEVY:  I like the metaphor of the literary scene here as a kind of ecosystem. I don’t see it as hierarchical, although some might say that the literary royalty in town resides at the University of Houston Creative Writing Program (CWP), which is nationally renowned and which we support (awarding more than $2.4 million in fellowships, prizes, support for Gulf Coast magazine, etc., since 1983). Rather, I like to think of our literary milieu as a web of vibrant relationships, cutting across cultures, age groups, income brackets, and the synergistic relationship that we have with the UH CWP enriches it all, makes possible so much of what we do. The faculty, graduate students and alumni of the Program help us to shape the reading series, they interview the visiting writers, they teach the Inprint Writers Workshops, they lead our memoir workshops for senior citizens at different senior centers across the city, they lead our Teachers-as-Writers workshops for K-12 teachers, they teach creative writing after school to young children at Project Row Houses. And it emanates from there. We arrange for writers from the reading series to give readings at HCC and TSU. The First Friday Reading Series (now in its 37th season) has been held at Inprint for many years, and we have book clubs that bring people together over literature. People get to know each other — writers, readers, audience, funders. It’s partly the culture of Houston, which encourages collaboration and openness and all kinds of social and artistic mobility. We think of Inprint as a nexus, as a kind of connective tissue.

A+C:  The Margarett Root Brown Reading Series continually gains in reputation nationally. Since Donald Barthelme isn’t around to call his high profile writer friends any more can you give us an idea of how the series comes together?

RICH LEVY: We are constantly networking, with New York publishers, the CWP faculty, other writers, folks who attend the readings, anyone who might have a connection that might be helpful. Our intention is to present leading writers who rarely read in Houston, writers of a wide range of ethnic backgrounds (that reflect the rich ethnic mix of Houston), to balance gender and have a mix of genres and basically offer the very best reading series we can imagine — something that we would enjoy and find extraordinary.

A+C:  Can you talk about the connection between readers and writers?

RICH LEVY:  Reading is still a private act — even though the modality is changing, from the book to the e-book, reading still essentially happens in our heads. But when we get together in a theater to hear a writer we love read from and talk about her work, the act moves from private to public. We share our passion for that writer, for literature in general, as well as the unique experience of literary performance — someone reading poems to us, or a novel or memoir (which touches that elemental childhood experience of being read to) — all of which stimulates discourse and builds community. It doesn’t mean we give up the private acts of reading or writing; life in the literary pond is just richer for this kind of occasional communion.

It was great to have Salman Rushdie back again — he’s a lovely person, a wonderful writer and a great reader and speaker. The Rushdie reading in 2001 marked several firsts: Rushdie’s first book tour since the fatwa had been declared in 1989, the first time a publisher sent us a writer on book tour, the beginning of our first full season at the Alley (our official relocation, after 18 years at the MFAH, to the Downtown Theater District). It was also the first (and probably last) time we were on every 10 o’clock news program (we had a large group of protesters on the steps of the Alley screaming “Death to Rushdie!”), the first time people waited in line for 2½ hours before a reading to get a seat in the theater, and the first season we sold season tickets. The 2010 Rushdie reading also broke several records — our largest audience ever (nearly 2,000), Rushdie’s largest audience for a reading, our quickest sell-out, causing us to move to a larger venue, and our first reading at Jones Hall.

A+C:  What about that line out the door to get into workshops?

RICH LEVY: Perhaps it’s the small class size and the quality of the workshops, the fact that you don’t have to be an experienced creative writer, and partly because Inprint is now known city-wide as a destination for creative writing. Also, since writing is becoming such an important part of our everyday lives, perhaps more people are recognizing the value of practicing the art of writing. After all, if you want to tweet well or write a decent email, letter, resume, report, etc., you need some chops.

A+C:  Reading needs to be a habit, so I have discovered. How do you spark that reading impulse early on?

RICH LEVY: We developed Cool Brains! to foster that life-long love of reading and also to give young readers a chance to meet a favorite writer, which can be a lifechanging experience. In the seven years of Cool Brains! we’ve had the good fortune to present some of the world’s great children’s writers, including Chris Van Allsburg (who signed books for four hours), Katherine Paterson (who did the same), Kate diCamillo, Gary Paulsen, this January Christopher Paul Curtis, and others. We’ve also featured a few renowned adult authors who wrote young adult books, including Nick Hornby and Isabel Allende. Last fall, Pseudonymous Bosch, the children’s mystery writer with the amazing pen name, had two children (“Egyptian priests”) come up on stage to wrap a third child in “ancient Egyptian linen” (toilet paper) while he presented his latest book, which focuses on the theft of a mummy in a museum.

A+C:  If you were not running a literary organization what would you be doing?

RICH LEVY: Good question. I’d like to have more time and mental space for my own writing, but I do like being out in the world, connected with people, and making things happen. I really like the community-building aspect of what we do. I’d probably be working with or for the written word somewhere, somehow, and it’s especially a privilege for me to be an advocate for creative writing. Some people are wood workers, some people are painters. I’m a writer, so here I am.
For more info:
www.inprinthouston.org