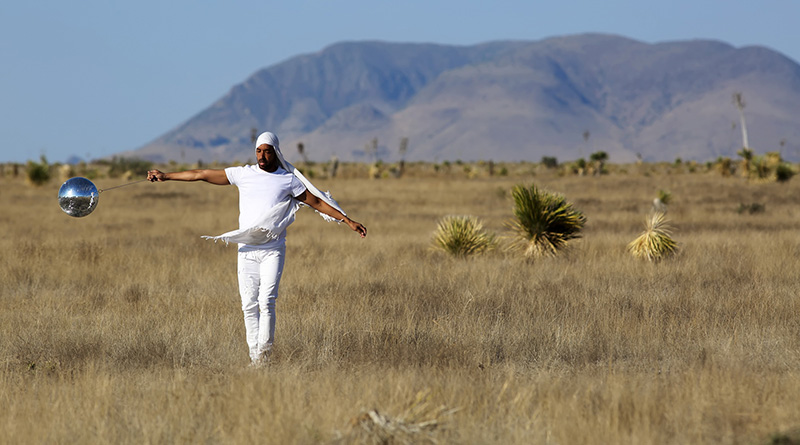 Disco Balls in the Desert and other Marfa Adventures

When I saw that this year’s Marfa Sounding focused on the great California-based legend and dance maker Anna Halprin, I knew that I had to make trek to Marfa for Memorial Day weekend. Organized by curator Jennifer Burris Staton, Marfa Sounding, a joint project between Marfa Live Arts and Fieldwork Marfa, “features site-specific performances, sound installations, film screenings, and conversations that engage alternative narratives in the development of minimalism.” So, my kind of outing! Last year focused on composer Alvin Lucier and next year will focus on Tarek Atoui.

It has been over a decade since I made the winding drive up the mountain to visit with Halprin to interview her before her keynote address at the annual Feldenkrais Method conference. I got lost on the way to her home and ended up on her famous dance deck where just about every dance luminary made an appearance. Standing on that deck by myself, I imagined everyone who had moved before me. More recently, CORE Performance Company and Frame Dance Productions founder Lydia Hance danced on that very deck about a year ago, working directly with Halprin and her daughter Daria in a Tamalpa Institute workshop organized especially for them.

Now well into her 90s, Halprin continues to influence a new generation of dancers. For the somatically inclined such as myself, she paved the way for a body-centered way of working. She brought art, drawing, and the environment into her work. During my Feldenkrais training she lead a session giving us a taste of the way she worked with movement and drawing. A handful of her dancers became Feldenkrais teachers and our paths were intertwined in dance and somatics. We spoke again in 2011 prior to the screening of Ruedi Gerber’s outstanding documentary Breath Made Visible at the MFAH. I was ready for another dose of Anna!

Halprin must be in the air right now, as concurrently with Marfa Sounding is the exhibit,

Radical Bodies: Anna Halprin, Simone Forti, Yvonne Rainer in California and New York, 1955-1972, at The New York Public Library for the Performing Arts in Lincoln Center through Sept. 17, which originated by the Art, Design & Architecture Museum, University of California, Santa Barbara, and co-curated by Ninotchka D. Bennahum, Wendy Perron and Bruce Robertson. Halprin’s collaborations with her husband architect Lawrence Halprin is also included in documenta 14 in Athens, Greece, through July 16 and Kassel, Germany through Sept. 10. And the Venice Biennale featured Halprin’s Planetary Dance during the opening events, and was also performed in the Bay area in June.

I hope to get to Radical Bodies before it closes, but let’s get back to Marfa. For someone who considers the Heights as “Canada,” I don’t take long drives lightly. My first job was to gather my travel team: dance photographer Amitava Sarkar and dancer/choreographer Laura Gutierrez. Both Sarkar’s attention to the light everywhere we went and Gutierrez’s knowledge of the dancers we were to encounter came in handy. Their company, camaraderie and excellent curation of car snacks proved a trip highlight, making the hours wiz by on the road, and the 24/7 dance discussions an added bonus for the adventure. Watching that much land go by on the drive west prepared us for what we were about to see.

Speaking of added bonuses, we found out three days before we left that the L.A. Dance Project was offering an open rehearsal at Chinati‘s Arena on 2pm on Friday, which pushed our departure time up to 3am. We made it with time to spare to watch a camera rehearsal for the L.A. Dance Project’s three live streams at various sites on the Chinati campus. As someone who strongly believes that dance needs to get out of the black box more often, it was inspiring to see Benjamin Millepied and his amazing dancers inhibit these iconic spaces at Chinati. The rehearsal process clued us into just how important the role of the camera was in making space- sensitive films. A few company members also had a chance to contribute choreography, including Houston native and company member Robbie Moore, whose duet with Morgan Lugo in lya Kabakov’s School No.6 proved a total standout in the collection of Chinati-based works. (Moore will also be creating a new work for METdance next season.) Of course, it was wonderful to see the whole company again, including Houston native and former New York City Ballet dancer Janie Taylor and the former PNB principal Carla Körbes in Millepied’s two duets. According to Dance Magazine, the project reached 500,00 views total. The company makes their TITAS Presents debut on March 30-31 at Dallas City Performance Hall.

The opening night featured two films, Jacqueline Caux’s Anna Halprin–Out of Boundaries and Andy Abrahams Wilson’s Anna Halprin-Embracing Earth, and it was a wonderful chance to see excerpts of her work to fully immerse ourselves in all things Anna. Embracing Earth reminded me of how tied Halprin was to her west coast surroundings. But it was seeing an excerpt of Halprin’s seminal work, Parades and Changes, that brought her essence into the room, especially through her exquisitely reverent use of nudity. And there’s something so sensual about the paper crunching section.

On Saturday afternoon, improvisation master, Lower Left member and Texas Christian University assistant professor Nina Martin presented a brief but potent movement workshop at the Crowley Theater, where she laid the groundwork for her Re-wiring process. Using an exercise she calls “Fussy Baby,” we experimented with a two-part movement instruction: move then redirect. Sounds simple, but it’s not, and nor is it easy to do. And it packed a wallop in terms short-circuiting our habitual flow patterns, which is why so much dance looks alike. She mentioned in jest that it’s also called “kill the choreographer.” As a recovering choreographer myself, I totally get that. Martin is also currently conducting research with Forklift Dance’s Body Shift program using some of this work. Lower Left also runs Dance Range Marfa, which offers upcoming summer programs in Berlin and Marfa.

Saturday night featured the headliner for the weekend, Stephen Petronio’s stunning performance of Halprin’s 1999 The Courtesan and the Crone, a short and poignant dance about aging, which is included in his BLOODLINES series on seminal American post modern dances. As soon as he stepped on stage donning a shimmering gold tunic and Jester-ish mask, a dog barked. At first, I was a tad annoyed that dogs go to dance concerts in Marfa, but then I remembered the experience of aging myself. There is something startling about it. Shock, horror and resolve are embedded in the work. During the post-show discussion, Petronio revealed more of his experience with Halprin and the process of inhabiting this dance and making it his own.

The final event featured Rashaun Mitchell + Silas Riener with composer Philip Greenlief in a new site-specific work at Antelope Hills Land, and my final chance to consider dance in the landscape. (Former Merce Cunningham dancers Mitchell and Riener have become a rising presence on the dance scene and are part of BAM’s Next Wave Festival on Dec. 13-16.)

Mitchell and Riener took over a large swath of land, playing with scale, stillness, and the constant wind as yet another element. I appreciated the way they began so far away from us and from each other, truly merging with the landscape. We don’t look at dance this way much. This shifting of the visual hierarchy forced the viewer to consider the total vista. We had to keep our focus wide open. Towards the end, a whirling, glowing disco ball entered the desert stage, sparkling in the setting sun as a pair of horses looked on in wonder. This bit of theatrical bling reassured me that a desert can be also be a stage. The rawness, the vastness of space and the majesty of the setting most certainly evoked Halprin’s earth-centered thinking. Heading home as the west Texas pitch-black skies came upon us, the long drive felt about right to consider the whole of our Marfa adventures.