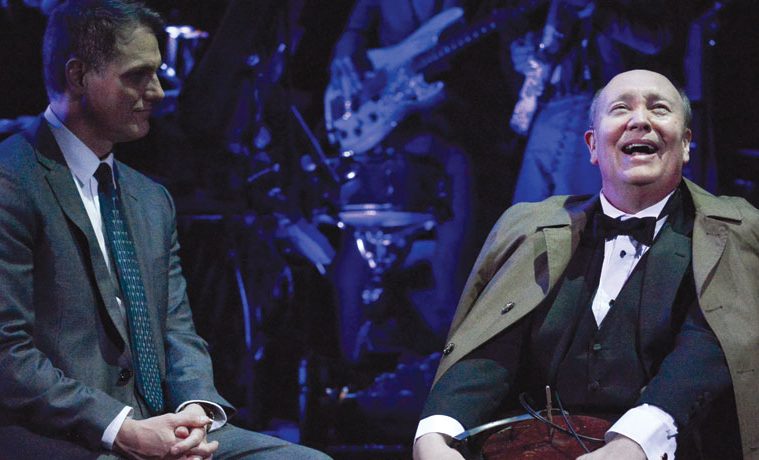 Playwrights Given a Big Voice on Texas Stages 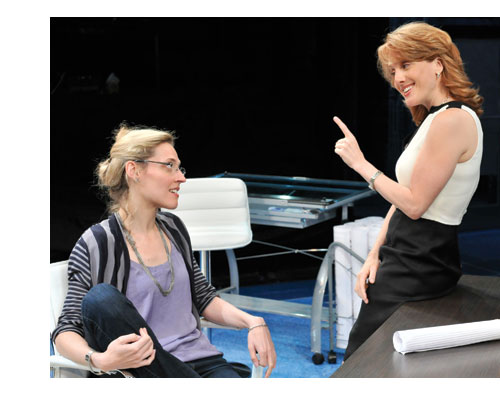 For lovers of Shakespeare and Molière, Ibsen and Chekhov, Miller and Williams, declaring our time a new Golden Age of the playwright might seem delusional, or at best, a flourish of hyperbole from some theater’s marketing department. But if you ask the artistic directors of some of the most respected ensembles in Texas, they’ll assure you such claims are hardly ridiculous.

IMAGE: Julia Motyka as Eliza and Nancy Lemenager as Janice in the Alley Theatre’s 2012 production of What We’re Up Against. Photo by Jann Whaley.

“This is absolutely true,” offers Ken Webster of Hyde Park Theatre in Austin, one of the Texas companies that has enjoyed the greatest success staging new works by playwrights like Will Eno, Martin McDonagh and Annie Baker. “The proof is in the great work being put out by playwrights. The last eight years have been a glorious time for artistic directors in search of great new plays.”

Though no one announced the start of an official golden age eight years ago, the signs have certainly been there in front of audiences across the state, especially in Austin, Houston and Dallas. For one thing, printed show programs have granted more and more space to the man or woman who created the plays, in addition to the men and women directing or performing in them. For another, plays are increasingly marketed and seasons are increasingly built around new works by this or that playwright with a following in New York or Los Angeles, here in Texas, or of course, in all of the above.

“Golden Age of the playwright? Bring it on!” responds Houston’s Philip Lehl, a veteran actor with Broadway credits who, with his actor-wife Kim Tobin, has founded not one but two innovative stage troupes. “The theater is becoming one of the few places where audiences can have a communal experience. As TV and movie audiences splinter and head to the Internet, people wanting to gather around a fire with the tribe to hear stories that shape their lives, head back to the theater. The playwright, of course, benefits from this and becomes what he was at the beginning: the high priest – the great tribal storyteller.”

On any given evening, if you go looking for this “great tribal storyteller,” mathematics dictates that you’ll find him (or her!) more often on small stages, among the less-known, more militantly-thoughtful actors, rather than in the major houses as nothing is more likely to fill lots of seats than the safe, the established, the predictable. And that would hardly be the realm of most playwrights attracting attention these days.Today the deepest, darkest visions of human existence – delivered with a laugh as well as a groan – are making their way onto Texas stages: Not because everyone embraces the message of the play, but because more and more of us embrace the playwright. 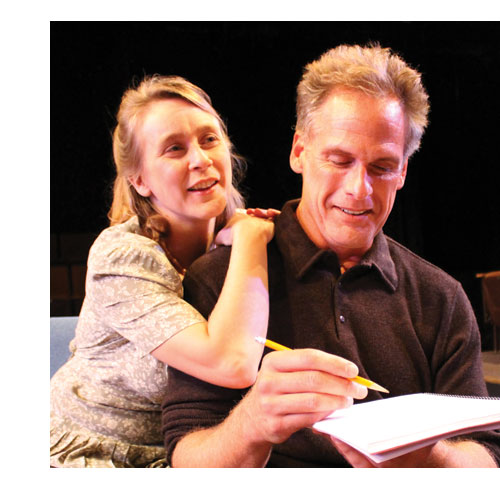 In Austin, for instance, Hyde Park has produced three plays by McDonagh (The Pillowman in 2007, The Lonesome West in 2008 and A Behanding in Spokane in 2011), along with three by Annie Baker (Body Awareness and Circle Mirror Transformation in 2010, plus The Aliens in 2012). Eno, certainly a darling everywhere, has found a special place at Hyde Park, thanks to his Thom Pain (produced twice in 2007 and again in 2013), along with his Middletown in 2012.

“We are the sort of Off-Broadway of Austin,” says Webster. “The fact that we have such a small seating capacity allows us to bring Austin audiences the work of new playwrights the audience might not be familiar with yet. We think it is important that Austin audiences have the opportunity to see these new works.”

Over the years, several companies in Houston have staked out the playwright-centric cutting edge. Still, that didn’t convince Lehl and Tobin to look for a different mission statement than the one their acting careers had placed squarely before their eyes. They both loved the written word, considering it the foundation of the acted word. Initially at Brave Dog Productions and finally at their Stark Naked Theatre Company, they committed publicly as producers, actors and directors to bringing Houston audiences plays that had not been given there along with plays they felt had not been given a fair shake.

Wallace Shawn’s work was rarely seen in Houston until Catastrophic Theatre mounted their critically acclaimed production of  Shawn’s Our Late Night, followed by the Houston premiere of the writer’s masterwork, The Designated Mourner. This November, it’s Marie and Bruce, Shawn’s 1979 portrait of marital misery. Catastrophic Theatre’s artistic director Jason Nodler and associate director Tamarie Cooper first collaborated on this play in 1999 under the Infernal Bridegroom Productions umbrella, and will return to the roles in the November production. “We are also enormous fans of all of Wally’s plays,” says Nodler, “and I hope to direct them all eventually.”

Their track record with rhymster Mickle Maher is equally satisfying, and includes The Strangerer, Spirits to Enforce, and this month, the world premiere of The Pine, a play Maher created especially for Catastrophic, funded by a grant from The MAP Fund.

“I am only interested in playwrights whose work speaks directly to the human condition,” explains  Nodler. “The human condition, or the existential dilemma to put it a bit differently, never changes. In that way, our work is always timeless. And I believe that all great plays reflect the times in which we live because we are human animals, and that is always chief among our deepest concerns, contemporary or not.”

Not surprisingly, certain artistic directors and therefore certain theater companies develop a fondness for this or that playwright. Yet few have achieved the regional and even national recognition that Houston’s Main Street Theater has with its interpretations of Tom Stoppard. The MST Stoppard love-fest began back in 1977 (the company’s third season) with Travesties, then continued with Rosencrantz and Guildenstern are Dead and The Real Inspector Hound in 1981 (the latter again in 1983), Jumpers in 1984, Indian Ink in 1990, Rough Crossing in 1993, Arcadia in 1996 and 2010, Hapgood in 1997, Night and Day in 2001, On the Razzle in 2004 and the ambitious trilogy The Coast of Utopia in 2011. In September, MST opens its new season with Stoppard’s The Real Thing.

“Spending time working on a Stoppard play is like being gently led through a graduate seminar on several topics at once,” explains artistic director Rebecca Greene Udden. “There’s always a ‘hard knowledge’ topic, such as nuclear physics, revolutionary theory, landscape gardening and romantic literature, and a human topic — love, passion, curiosity — the inner workings and very essence of who we are. I have always loved being surrounded by people who are smarter than I am.”

Houston’s Alley Theatre has just added Theresa Rebeck’s new play Fool to their season. They seem to be dating the playwright, as Fool marks their fifth Rebeck play. The relationship started with the hugely successful Bad Dates, followed by The Scene, Mauritius and their recent production of What We’re Up Against.

In Dallas, true to its iconoclastic personality, theater companies share the rest of the state’s fascination with new plays by new playwrights – they just make sure a lot of them are different playwrights. One of the main ways to pull this off, says Dallas Theater Center artistic director Kevin Moriarty, is “discovering” playwrights in even larger theater cities (New York, primarily) and then commissioning them to write something original for Dallas.

For example, Kim Rosenstock wrote a play called Tigers Be Still, which Moriarty saw in New York some years ago, finding the playwright’s voice particularly fresh and engaging. DTC produced Tigers, then followed up with a new musical called Fly by Night and an upcoming original play. Kristoffer Diaz wrote The Elaborate Entrance of Chad Diety, successfully produced by DTC this past season, and is now working on two new plays for the company. And DTC will produce a new musical called The Fortress of Solitude next season, after which the show will travel to the Public Theater in New York.

“Every company has its own mission, vision and values,” Moriarty says of the ultra-diverse Dallas theater scene. “We should each be different. At DTC our aim in producing plays is to inspire a dialogue with our community about the lives we live – our joys, concerns and issues that matter to us. We think it’s important to include new plays in our season because they’re most likely to speak directly to our time and place.”