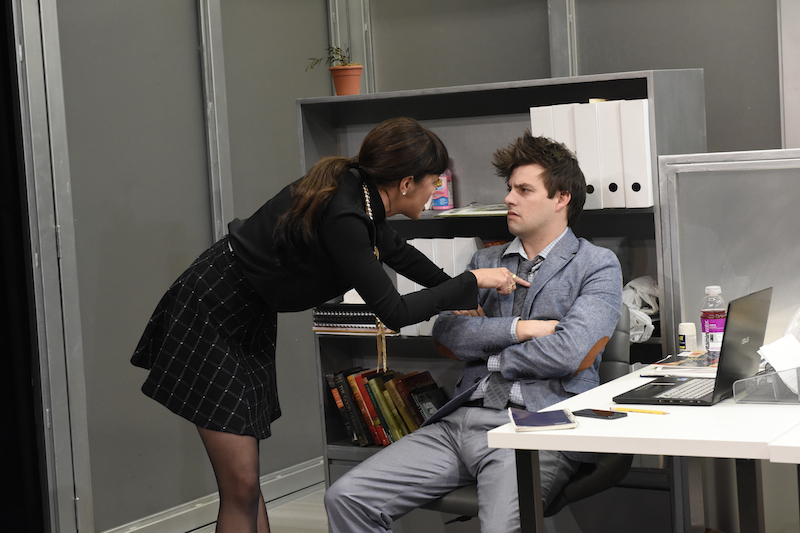 Highs and Lows: Gloria at DTC

In keeping with the law of averages, there’s an idea floating around contemporary culture that a person becomes the average of the five people with whom they spend the most time. Dishearteningly for some, this includes the schmuck in the next cubicle over. Perhaps this is what happened to the wildly unlikable characters in Branden Jacobs-Jenkins’ play Gloria, onstage at the Dallas Theater Center through Jan. 22, 2017. Perhaps they just averaged one another out to nasty scraps of humanity. Or maybe the competitive New York publishing industry shut down their souls. Or maybe that’s just what how ambitious millenials turn out: privileged, egotistical and vicious.

The play is divided in two, both in structure and tone. Under Christie Vela’s direction, the play is a whirlwind of highs and lows. It opens with an anxiety-inducing day in offices of editorial assistants working on the culture desk at a lifestyle magazine. Three 20-somethings, Kendra (Satomi Blair), Ani (Gracie Montie) and Dean (Drew Wall), berate each other over one thing after another. Particularly, they focus their meanness on the night before’s housewarming party of their coworker, Gloria (a stony, shy Leah Spillman), an older woman whose worked at the magazine for decades. Dean was one of only a handful of attendees — the women had made plans to go, but only as a joke. The conversation is unwieldy and cruel; playground bullies evolved into over caffeinated gossips.

The second act turns slow and preachy for reasons that can’t be revealed without spoilers. If this play has shock value it derives from a truly horrific act of violence that sends the audience out into intermission. Afterward, the plot is a series of conversations about whose version of events matters more. The first act watches these young journalists battle for whose voice and point of view matters most, occasionally devolving into actual shouting matches, which incites Lorin (Michael Federico) to huff down the hall from the fact checking department to ask if they could please keep it down. The second act expounds upon this point in a less vibrant battle for whose narrative will make the most compelling book or movie.

It’s clear that the most important point of view in this play is that of Jacobs-Jenkins. For what the characters lack in generosity, it’s more problematic that they lack any emotional depth — a flaw of the writing, not the crisp, thoughtful acting. The playwright uses their various rants to relay his own points of view about the state of contemporary work culture, the publishing industry, and the way the general public consumes a tragedy. These are all interesting points of discussion in an article for Salon or Huffpo, but they don’t amount to two hours of interesting theater.