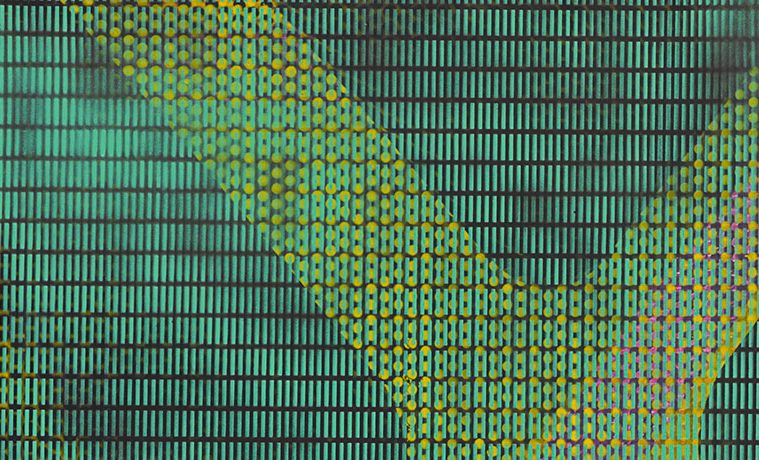 Isa Genzken: Retrospective is on view at the Dallas Museum of Art through the end of the year.  Organized by the Dallas Museum of Art in cooperation with the Museum of Modern Art in New York and the Chicago Museum of Contemporary Art, the DMA is the show’s final US destination.  Comprised of nearly 200 pieces in a wide range of media including sculpture, painting, photography, installation art, found objects, film, and art books, the exhibition is the first to feature this little-known artist in the US. 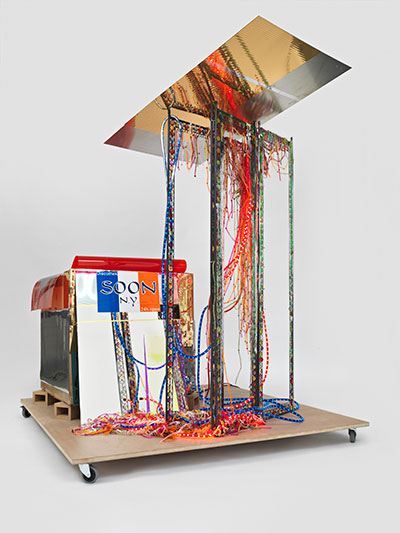 Genzken (b. 1948, Germany) is well known in European art circles, and represented Germany in 2007 for the 57th Venice Biennale.  In the press releases from both the DMA and MOMA each claim that this exhibition of Genzken’s work “is the largest to date” and that she “is arguably one of the most important and influential female artists of the past 30 years.” (Intentionally or not, the DMA left out the word “female”, at a time when much is being made about the paucity of large-scale monographic shows of women artists.)  This ambitious and compact exhibition fills the barrel vault and the four adjacent galleries, one of the DMA’s most dramatic spaces. Accented by natural light and expansive views, Genzken’s most recent human-sized installations of found objects and materials greet visitors as the first experience of her many themes, ranging from visual perception, urban life, architecture, the tragedy of 9/11, and the subsequent so-called “War on Terror.”

Since it is the final stop of a well-publicized, anticipated, reviewed, and discussed show, a consideration of the critical reception sets the stage and contextualizes the DMA version, relative to the first venue in New York.  Might anything new or different reveal itself on an additional reading through the notions of “exhibition” and “curating” as to the construction of meaning? It has been noted in both the New York Times and Artforum that the MOMA exhibition was curated chronologically; as Hal Foster states, it “not only possesses historical sweep—from reconstruction Germany to the ‘War on Terror’—but also articulates a grimly dialectical view of that history.”  At the DMA, perhaps due to the space, but more likely to curatorial choices, the exhibition is presented in an arrangement theorized in the history of ideas by Walter Benjamin as a “Constellation,” which has the possibility to unveil more about a historical subject than the linear approach of historicism, of which the chronological is part and parcel.  This approach also goes beyond the dialectical by opening an array of relations and possibilities of meaning that the show at the DMA takes advantage of by starting with Genzken’s newest installation pieces, Ground Zero, 2008 and Oil XI, 2007, as the hub of an arrangement that installs the rest of the three decades of work in four galleries and the interstitial spaces between them.

Genzken was in New York on September 11, 2001 and her response to the loss of the World Trade Center is an installation of proposed buildings made of (to name a few materials) fabric, metal, plastic bowls, toys, dishes, cable, and wood.  These are formed into sculptures that represent a church, a memorial, a disco, and a fashion store which suggest her interest in human interaction and entertainment as an antidote to the tragedy.  This response will resonate and contrast with her much different treatment of the war torn German cityscape in another gallery by use of poured concrete and a minimalist aesthetic. 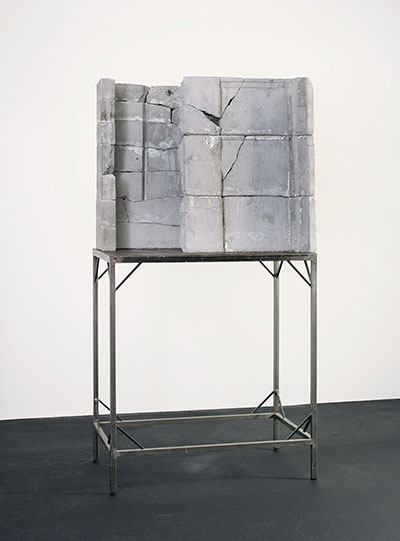 While Oil XI arranges a series of suitcases, perhaps abandoned by stranded travellers, and advances a commentary on a society enslaved in the aftermath of the tragedy, viewed overhead by three astronauts (actually three plastic and fabric spacesuits with NASA insignia) observing from high above, surveying a not so imaginary wasteland and suggesting the scramble for, and struggle to maintain, the control of oil in the Middle East, hence the title of the piece.

If by now the attentive museum visitor has neglected to identify more than traces of the historical avant-garde from Duchamp’s ready-mades to Berlin-era Dada, then it would become clear upon entering the first gallery to the left where the earliest pieces from the 1970s and 80s are installed.  It should be said that Genzken studied at the Dusseldorf Academy of Fine Arts (1972-1973) and was involved with art circles comprised of a “Who’s Who” list of post-war German artists.  This includes well known figures like Joseph Beuys, Sigmar Polke, her one- time husband Gerhard Richter, her long-time companion the art historian Benjamin Buchloh, Katharina Fritsch, Thomas Struth, and Blinky Palermo.

In this room, Genzken’s only true ready-made, Worldreciever (1982), an actual multiband radio, can be found with pieces from her Ellipsoid and Hyperbolo series of pristine abstract sculptures.  The “aural” of the radio and the notion of “visual” perception stretched and contorted in the long colorful lines of the sculptures interact and suggest her interest in perspectival space and its socialization in reconstruction Germany and the new urbanism she frequently observed in trips to New York.  These sculptures also reveal similarities to fellow artist Blinky Palermo, who created a vast body of work investigating color in abstraction in objects, fabric, and paint.  Her pieces are perhaps an homage; Palermo died in 1977, several years before Genzken executed these two series.

Genzken engages autobiography in a series of pieces titled Schauspieler (Actors), created in 2012-13, and also installed in the barrel-vault space.  These pieces are comprised of commercial mannequins outfitted as different “types” and representative of models, street people, and party kids to speculate on a few.  She makes use of both collage and found objects, and also outfits them with her own clothes and accessories. This again sustains the ready-made aesthetic present in her work in various ways from the beginning, referring also to her work as a fashion model in the 70’s.

The DMA’s exhibition succeeds in allowing the viewer to construct a reading of Genzken’s evolution without recourse to a chronological method.  In this case introducing recent work first does not mean that there is any order afterwards; the earliest work is not exhibited “last” since there is no “last” to speak of—only the particular pathway taken by chance by any particular viewer.  This enables the viewer to discover Genzken’s aesthetic treatment of themes at different points in time, providing an instructive experience: A perfect final destination for this show, though not anywhere near the end for Genzken, who’s just now hitting a new stride.