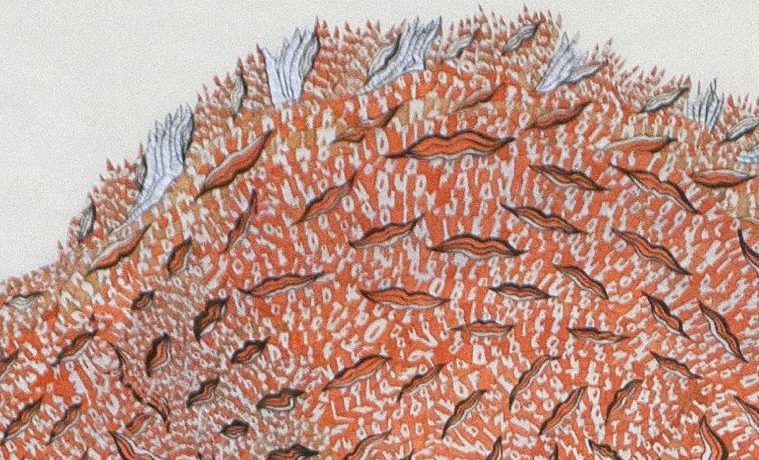 Natasha Bowdoin: In the Garden

There are various kinds of fabrics and fabrications, health from metaphoric to material, structural to ideological, social to moral, and more. The fabrics — the “stuff” — artists turn to for ideas and inspiration for their work might be obvious, difficult to see or entirely hidden. In Natasha Bowdoin’s exhibition In the Garden at Talley Dunn Gallery, the final form of her works relies heavily on their inspirations, but in ways both apparent and veiled. And it becomes more complicated when you know the sources well.

Ralph Waldo Emerson wrote beautiful essays in an attempt to move the heart and mind. They’re affirming, erudite, lively and wonderfully thesis-resistant — they always arrive as sincere attempts to joyously contemplate an idea, a person, a topic. Like Plato, however, his respect for artists is problematic. In his essay, Art, he wrote, “Beauty must come back to the useful arts, and the distinction between the fine and the useful arts be forgotten.” For most contemporary artists the trouble here lies with doing away with this distinction. With many exceptions, most generally believe that art doesn’t need to do anything. This frees art to be what it is, for artists to do what they do without obligation to an agenda. Yet, what if you enjoy reading Emerson anyway? I know I do. And Natasha Bowdoin does too. 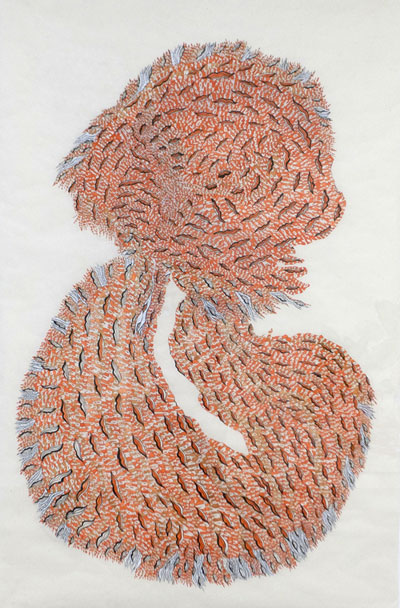 The most obvious choice is to simply ignore the parts you don’t like. Another option might be to productively misread him — if you’re trained in hermeneutics or deconstruction this would be ideal. Or you could do what Bowdoin has done and make Emerson your fabric, your material, not simply metaphorically or inspirationally, rather quite literally.

The four large gouache and ink paintings on cut paper, entitled Books of Nature (numbers 1-4), have an organic, creaturely quality to them. They’re abstractions, lively shapes and lines that hint at life. One seems like sleeping, twisting, wolfish whales. Another appears to be coral and posy. There’s the much-coiled serpent (the least suggestive and most representative of them all). And then there’s one that resembles a pre-Columbian mosaic. When you look closer at them, as the patterns and lines beg you to, you begin to notice that the patterns resemble letters, words, perhaps sentences. But is it arbitrary? Or are they in fact not words at all but only hints of words in a visual allegory for nature’s text? Or is it Emerson? It is.

It’s nothing new to use passages of texts this way — but Bowdoin does it well. Not invisibly, but woven in and subtle enough to make you doubt a little what you’re seeing. Add to that Emerson’s call for art to be useful, here heeded — interpreted — by using his very own words as a conceptual fabric of patterns and shapes, and you have some smart, attractive works.

The other series in the show, Flowers for Henry, consists of gouaches on cut paper dedicated to outsider artist Henry Darger. The works are arrangements of paper flowers, bunched and stacked in such a way as to create some sculptural dimensionality. The color palette, like the flowers themselves, is reminiscent of Darger’s work. His wonderfully strange, illustrated epic is replete with flowers and butterfly wings, all gently rendered toward some intuited color harmony. While the conceptual bond to Darger doesn’t seem as strong as it does to Emerson with Books of Nature, the works remain fragile and lovely, which ought to be bond enough to Darger. In fact, the fabric here might best be named friendship.

These works will reward you if you look closely and then step back and reflect on the people who inspired them. They visually instance those men well. And they’re carefully and thoughtfully constructed, demonstrating the most positive form of the sentimental scare-word: gratitude.