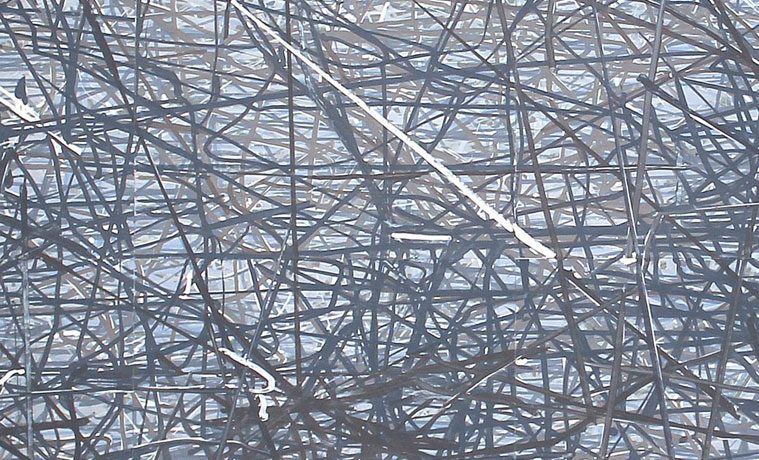 On view through May 16 at Talley Dunn Gallery, Sam Reveles’ exhibition, Iarnród: New Drawings, features six new works inspired by Reveles’ stay in Ireland. The title, Iarnród, is a direct reference to IarnródÉireann, the national railway system in Ireland. Five of the works on paper take their names from the railway, while one, CillRialaig 2, is named after the CillRialaig Arts Centre, the location of a 2013 residency for Reveles in Ballinskelligs, Ireland. The new works continue the artist’s study of line, color, and space.

Reveles’ style is characterized by precise chaos; energetic, yet serene. His mark-making feels deliberate, despite the creation of convoluted webs of punctuated lines. Similar to his Aran series from 2013, he employs a limited color palette: varying tints and shades of white, black, and gray lines, with some works, such as Iarnród 4, containing large sections or marks of blue. The different colored lines layer on top of one another, creating a distinct sense of space.

Reveles has commonly found influence in a particular place, trying to pinpoint its character through his work. In 2010, he created Juarez Paintings, a series of ten oil and acrylic paintings on canvas composed of a vivid palette of colorful, gestural marks that draw upon the turmoil of the region. Like Juarez Paintings, Iarnród is composed of works that function as abstract landscapes – they are specific to their location,seeking to reveal something about their source.

Through his abstractions, and his decision to bind these works to an actual place, Reveles attempts to capture the place’s spirit, or indescribable qualities. In a statement from 2013, he identified “the consistent thread that runs through my work is a keen awareness of energy, more specifically, the energy of a particular place or area.” He utilizes the modern impulse to reduce a medium to its core elements – line and color, in this case – to attempt to reveal the energy of a specific place. In these new works, the essence of painting collides with the essence of place.

The paintings on view at Talley Dunn represent a collection of work that relies on subjectivity – the paintings communicate a personal experience, but not one that is singular or necessarily well-defined. The finished paintings seem instead to be evidence of the acts of experiencing and remembering that are then morphed into abstract markings.

In 2014, Jim Edwards and Michael Paglia drew a connection between Reveles and Cy Twombly in their book Texas Abstract, but they focused on the differences in how each artist constructs lines. What Reveles and Twombly have in common, however, is their relationship with the canvas; their final works serve as tactile evidence of the process of art marking. Both artists take control of the canvas and their abstractions, in a way that leaves traces of their presence. As such, the six new works in Iarnród are sites where Reveles seeks to control the medium, as well as the memory, of a specific place.