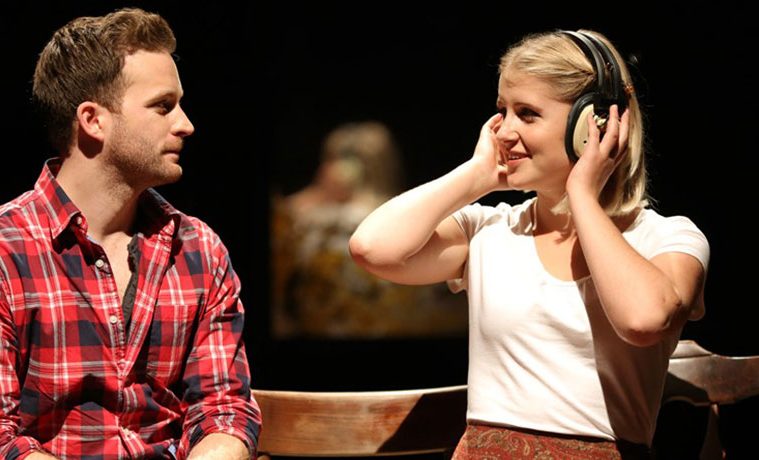 Once Gracefully Travels from Film to Stage

Stuart Ward as Guy and Dani de Waal as Girl in Once, now on tour nationally, including four stops in Texas.
Photo by Joan Marcus. 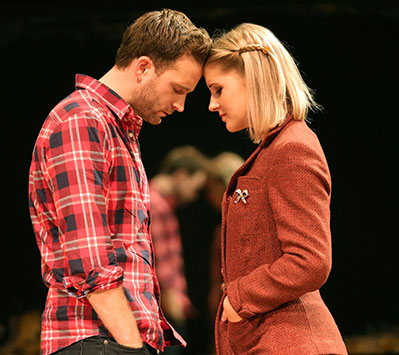 Stuart Ward and Dani de Waal in Once. Photo by Joan Marcus.

I was hesitant walking into the Winspear Opera House on opening night of Once, the touring romantic musical based on the Irish indie film of 2006. After all, what made the movie a standout was its simplicity in music and tender moments between lead characters. I was almost certain none of those traits would carry over to the big stage, where I feared the show would become much bolder and louder.

Thankfully, producers had enough guts in the source material to keep the show close to the tone and perspective that made the film so endearing to audiences. Anyone at the opera house expecting to see Riverdance 2 was, undoubtedly, very disappointed.

Sure, there is plenty of music to drive the story of a boy and girl who meet quite accidentally and make beautiful music together. In fact, the infectious melodies helped garner an Oscar for Best Original Song (“Falling Slowly”) and a Grammy for Best Musical Theater Album. The stage musical received eleven Tony Award nominations in 2012, and took home honors for Best Musical and Best Book, among others. Once runs through Dec. 28 at AT&T Performing Arts Broadway Series, Dallas, Bass Concert Hall, Austin, Feb. 24-March 1,  Majestic Theatre, San Antonio March  3-8 and The Hobby Center, Houston, Mar 10-15.

Producers quickly give the show a personal touch, having the stage open to the audience before the story begins. Sauder up to the barroom stage and grab some beer (Irish, one presumes) before finding your seat. Actors mingle near the piano, playing violin, accordion and guitar, chatting amongst themselves. Soon, as the last patrons stroll off the stage, the dialogue becomes amplified and we are witness to some buddies trying to impress each other in musical gamesmanship at a Dublin waterhole, where the story centers. Ultimately, the focus comes down to Guy, an Irish street busker who earns his beer money fixing vacuum cleaners. There enters a young woman. 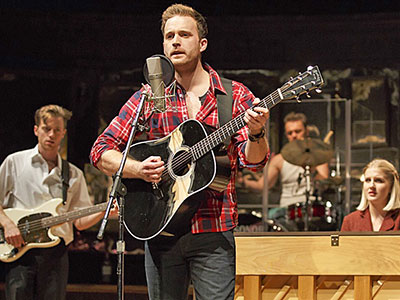 Stuart Ward as Guy in the touring production of Once.
Photo by Joan Marcus.

“Do you enjoy being Irish?,” the Czech emigre known only as Girl asks Guy.

“Are you serious?” he retorts.

Thus begins our story of two people, both musically-inclined—he strums guitar, she plays piano—and their short time together, making an album and discovering their own personal grooves along the way. The dialog at times is a bit sentimental, but always delivered with verve and earnest. Guy is the lost dreamer, distraught that his girlfriend left for New York without him, and feeling trapped in a country that offers few rewards unless fame touches you (Bono and other prominent Irish musicians get a nod in Edma Walsh’s book.) Girl has heart and a strong mind. But she, too, uses music as an escape from a lonely marriage.

English actor Stuart Ward and London-trainer actress Dani de Wall craft sincerity as they awkwardly connect through the power of music, mostly of the folk-rock genre, with heartfelt ballads taking up most of the space, although the beat does kick into higher gear when the duo forms a band to record some of Guy’s arrangements.

But what is most captivating about this big Broadway musical is how intimate and personal it feels. There are several deliberate silent moments in the story that only work to deepen the strength of the characters as the story fiercely challenges clichés and convention, moving to its own beat.

Once is a show I could see twice.