Painting Toward Intimacy: Jonas Wood at Dallas Museum of Art 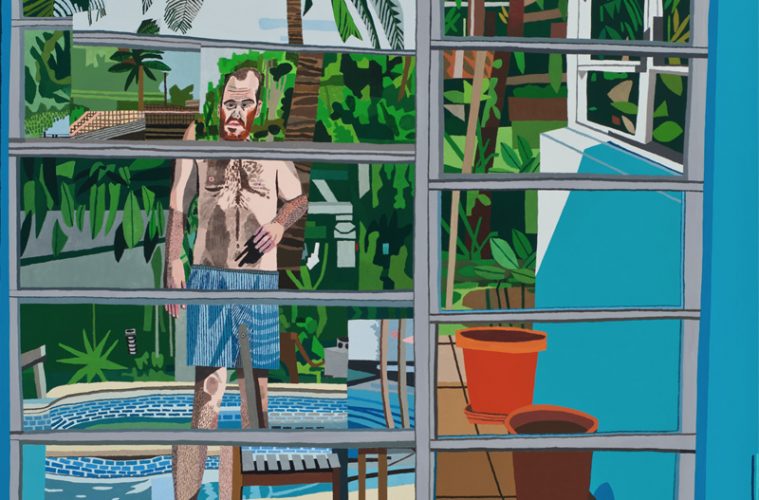 There’s an intimacy that comes with looking at painting, Jonas Wood tells me.

We are speaking in advance of his first major solo museum exhibition at the Dallas Museum of Art (March 24 – July 14), and I’ve asked him about sincerity in his work. Wood makes paintings of plants, ceramic vessels, basketballs, complicated interior spaces and patterns, his family members and friends—things that carry personal familiarity and significance. He doesn’t think about them in those terms, he tells me, but it would be hard to paint anything that he wasn’t sincerely interested in.

The thing he chooses to paint becomes “charged,” he says. “It’s charged in that way – in that it’s close to me. Intimacy is the picture plane, the history of painting, the viewer who is seeing something they’ve never seen before.” 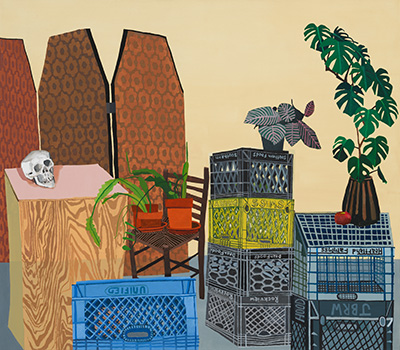 “What we’re really talking about is editing,” he adds. “I basically have a giant treasure trove of source images, of things I’ve taken or found, that are part of my archive. Things people send me, and family pictures. Then I think about what I want to paint… I’m making choices based on aesthetics, but also maybe based on things that are important to me.”

Wood works from a digital archive of collected images which he looks through often. He prints out some of the images, posting them on the wall, and begins tracing, drawing, and arranging the composition for each painting. “Sometimes I’m really jazzed up to paint that thing because it already has all those things I like to paint already,” he says. “My practice of painting has its own little world.”

The world he’s describing has “a shaky but lovingly attentive feel,” writes Art Review. Wood paints pictures of rooms, still lifes, “the way people live.” Bright California light, luxurious pattern and texture, lamps and pets and friends and toys and paintings and posters and plants fill his spaces, which are at once familiar and slightly off-kilter.

A gardener from an early age, Wood once described his move to Los Angeles as a “plant epiphany,” and plants fill his interior scenes and are also individual subjects of his paintings. 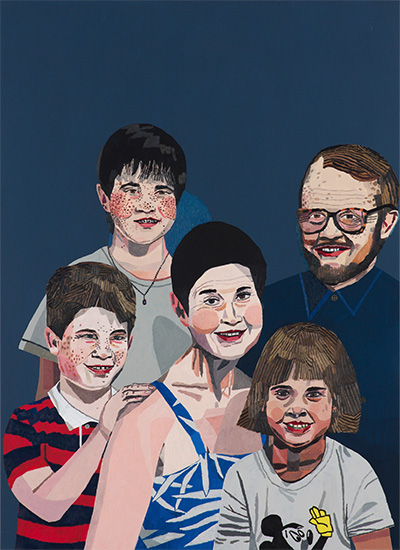 “It did coincide with moving to Los Angeles and finding a lot of things growing,” he says. “From still life to taking pots out of the painting, then taking giant plants out of the painting, then making these weird scientific geometric color paintings. There’s an ebb and flow of that in my paintings in general. I can’t make super complicated paintings all the time – I need some balance. So, taking an individual thing out of a painting and isolating it – a basketball, a pot, now some weird emoji paintings – it’s just a genre of painting that’s within these different kinds of larger figurative works.”

Wood is married to ceramicist Shio Kusaka and he paints ceramic vessels, sometimes hers, sometimes from their collection. As with other things he paints, he began including ceramics as a way of learning. “Shio was working on vessels,” he says. “From painting still lifes that had pots in them, to paintings of giant pots, to appropriating pots, to painting a vessel that has an image on it that tells a story, it’s a lot of things that come from spending a lot of time with each other… Being around clay more, appreciating other people’s art, all those things colliding. Now it seems more intentional, but it was just where my investigation has led me so far.”

The exhibition at the DMA is organized in groupings of Wood’s paintings since 2006, moving from exterior to interior reflections, what curator Anna Katherine Brodbeck calls “a trajectory toward intimacy.” It includes portraits, interiors, exteriors, wallpaper, clippings. One portrait room is of family; another includes portraits of artists. “…if Wood’s work immerses us in the disorienting space of this interior, and those of his own family and friends, he does so in a historical period in which the privacy of the home, the workplace, and any other space we occupy is permeated by the technology of the internet and social media, creating another level of psychological intensity,” writes Ken D. Allan. That intensity, which I see as a kind of intimacy, is warm and inviting, a life lived intensely, with good company. 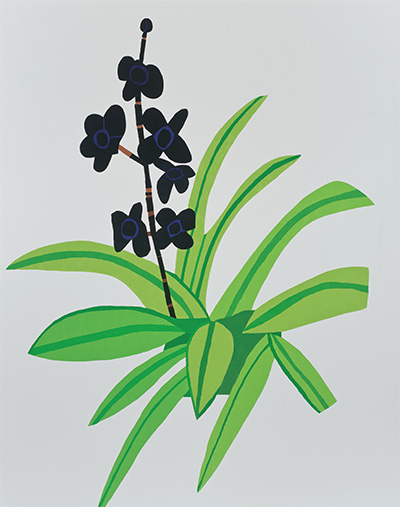 In his lush yet compressed spaces filled with friends and family (or the things that represent them), Wood makes paintings rooted in Los Angeles, where he’s lived since 2003. Indeed, he calls the city a life companion. “I can’t say that it’s because of L.A. that I paint this way, but I definitely have matured and am heading toward the painter I hope to become living in this city and starting a family here,” he says. The city “was ultimate freedom to me… I feel lucky that I just randomly thought this would be better than New York and moved here.”

“I wasn’t ever thinking beyond just having a little studio and being able to paint and have a job,” he says. “Moving to L.A. was a huge event – it was another education.”

With work included in MoMA, the Guggenheim, the Whitney, the Hammer Museum, the Broad, LACMA, MOCA Los Angeles and the MCA Chicago, Wood’s career has been flourishing over the past 15 years. Now, he says, he’s working on finding balance in his life. “There’s such an incredible amount of imbalance when you start,” he says. “And people are telling you what you need to do. But you’re headed for disaster (if you work at the pace the art world encourages).” Wood finds himself in a new moment, one in which he can breathe, explore, and enjoy the benefits Los Angeles offers. “I might be the only Lakers Celtics fan in the world,” he laughs.

He and Kusaka are also building an impressive art collection of their own: he is interested right now in works by Sayre Gomez and Christina Forrer, and they recently acquired a drawing by Charles Burchfield and an early Ken Price drawing. 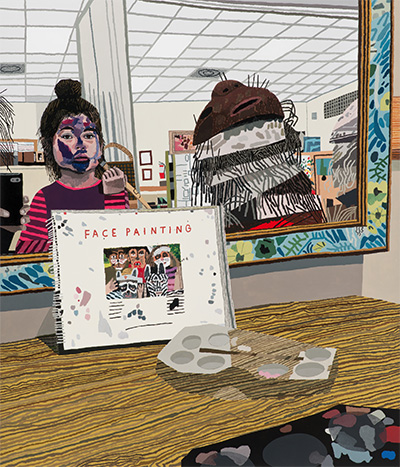 Wood’s is a painting practice rooted in seeing the surrounding world through an exuberant looking, seeing things as valuable because they are the things one sees as one moves through the world.

“A lot of people ask me two main questions – how many paintings do you make a year and how long does it take to make a painting. I think the reason people ask that is because people think that is the thing you should try to keep track of, and I feel like that is sort of anti-how I want my practice to be, which is completely uninhibited.”

What he’s trying to do, he says, is less about tracking production and more about allowing a process of learning to unfold. “I feel like painting is  always opening up, and I’m also OK with repeating and going back,” he says. “I’m just always trying to get better at painting.”