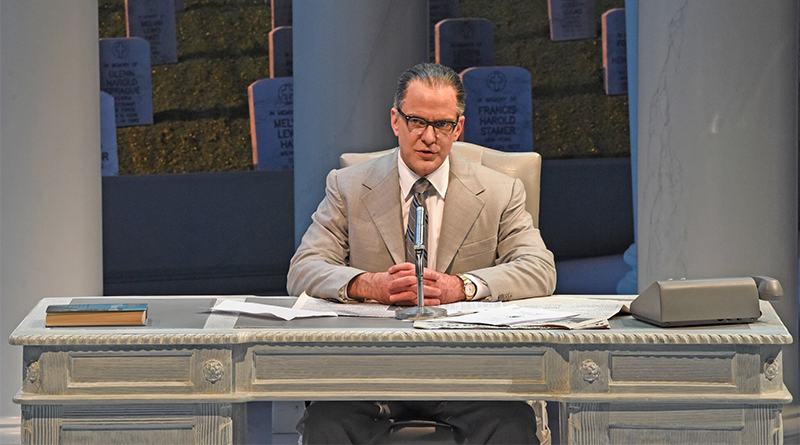 Progressive Texan: The LBJ Legacy Continues at the Alley and DTC

Brandon Potter as President Lyndon Baines Johnson in The Great Society, by Robert Schenkkan, directed by Kevin Moriarty, through Feb. 18 at the Alley Theatre, and March 9-April 1 at Dallas Theater Center.
Photos by Karen Almond.

War. Healthcare. Race. A divisive president in a tumultuous time. Self-destructive and unrestrained ego. There are more than a few echoes of today’s political climate in Robert Schenkkan’s The Great Society, which chronicles Lyndon Baines Johnson’s dramatic decline in popularity during his second term in office from 1964-1968.

Dallas Theater Center and Houston’s Alley Theatre teamed up in 2016 to co-produce Schenkkan’s earlier, Tony-winning play, All the Way, and have brought back much of the same cast and creative team for its sequel, which runs in Houston through Feb. 18 and in Dallas from March 9-April 1. Led by former DTC acting company member Brandon Potter as LBJ and Houston’s Shawn Hamilton as Rev. Martin Luther King, Jr., the blended company is once again under the direction of DTC’s artistic director Kevin Moriarty. Fresh off his recent regional Tony Award win and thrilled to be revisiting this collaboration, Moriarty is more than a little aware of how America seems to still be grappling with many of these same issues, 50 years later.

“The parallels are immense, but it’s not always a simple translation of how the themes reverberate today,” says Moriarty. “We are still divided around issues of how to help people with less means rise up to greater economic advantage, and there are still questions about gender inequality and an understanding of what makes us great as Americans. The issues are eerily similar.”

The Great Society begins soon after All the Way ends, with LBJ using his charisma and power — any means necessary, really — to pass an astonishing amount of legislation that Moriarty calls “mind-boggling” in the way it altered history: the Voting Rights Act, Medicare, Medicaid, the Civil Rights Act, the Economic Opportunity Act, the Head Start Program, the Nuclear Non-Proliferation Treaty, and the Freedom of Information Act, just to name a few. But at the same time, racial tension was rising with the Black Power movement and the Vietnam War was draining the government’s time, money, and resources, and dramatically turning the public against LBJ.

“The powerful thing in this play is that LBJ had a vision for America: it was transformative, and, for me personally, deeply beautiful,” says Moriarty. “This notion of a great society that would lift up the poor and provide equal rights for everyone and opportunity for all… that is what is so heartbreaking. The same man who was able to use every tool as his disposal to get meaningful legislation passed — often by shading the truth or telling a different story to each person — became someone during Vietnam whose methods were considered lies to the American people, and that was what ultimately destroyed his presidency.”

It’s a legacy that can be viewed as a classical tragedy, Moriarty believes, much in the vein of Henry V or Richard III, especially when compared to the moral and political struggles that Dr. King was undergoing at the same time.

“What the plays shows us is how both of these characters, at their lowest points, respond so differently,” say Moriarty. “King rises above his personal sense of betrayal and puts his ego aside. He makes a selfless and strong choice as a leader that culminates in his speaking out against the Vietnam War — knowing it will alienate his supporters and cost him power and respect — because it’s the right thing to do. He stays the course of nonviolence even though it means losing key close friends and allies. Johnson responds by cutting himself off, by narrowing his circle to only the sycophants who agree with him. His friend and colleagues, all of whom were essential to his strength over the years, leave him. The result is that King’s legacy still shines bright, despite the fact that he suffered some painful defeats during that time period. Johnson ultimately goes down in a painful defeat and returns to his ranch in Texas, without his good reputation intact.”

Of course, both theater companies are currently dealing with their own reputations. Longtime Alley artistic director Gregory Boyd abruptly retired in January amid allegations of severe misconduct, while Dallas Theater Center’s director of new play development, Lee Trull, was dismissed in December for allegations of inappropriate behavior.

But for now, Moriarty has been focusing on the joy of watching actors from two communities build relationships and explore the similarities and differences between Schenkkan’s two plays. And that includes continually reminding himself of LBJ’s lasting impact, despite the tarnished legacy he took with him when he left the White House.

“The Voting Rights Act alone would have been a miraculous achievement, but then think about healthcare and education,” he says. “It’s phenomenal how much better our lives have been made because of a progressive Texan.”