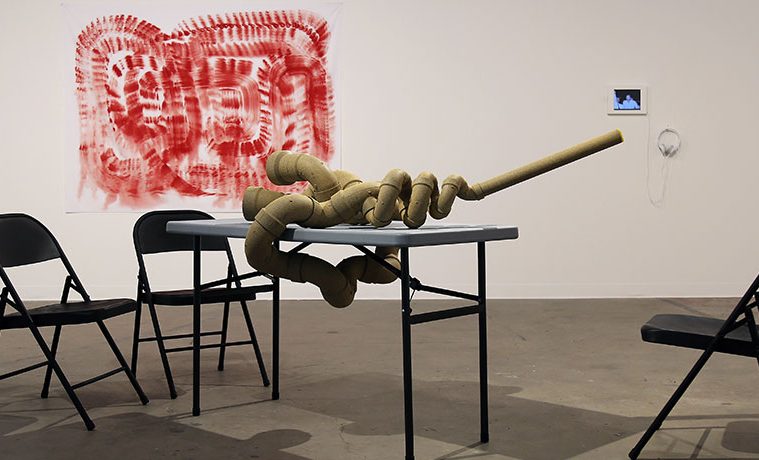 IMAGE ABOVE: Installation view of Mariah Dekkenga and Josef Bull: We have never been modern, on view through July 19 at MASS Gallery in Austin. 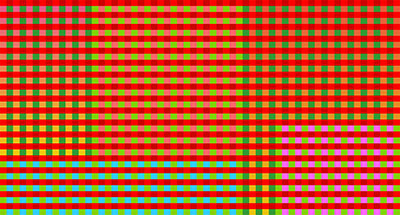 Bruno Latour’s 1991 book We have never been modern,a short but dense text that reevaluates modernism, is no light read. By the time you’ve made it halfway through the world renowned anthropologist, sociologist, and scientific historian’s book, nearly every other word has been internally redefined so differently from its common meaning that reading becomes a task of cryptography. It’s very difficult to do without flipping backwards through the book and keeping a notepad nearby.

Essentially, Latour sets up a straw-man modernism through the exposure of “The Modern Constitution,” a paradoxical set of guarantees and qualifiers that flesh out what Latour feels are the essential beliefs of the moderns. Then Latour pokes holes in the straw man to show how ridiculous those moderns were, that they were just like the pre-moderns before them except for the fact that the moderns believe otherwise. It seems an easy strategy, though not altogether a convincing one. What Latour and I can agree on is that the moderns subscribed too deeply to pure categories and held significantly exaggerated notions of their society’s separation from nature, pre-modern cultures, and their own pre-modern past.

At any rate, if you can suffer Latour’s use of language in We have never been modern, it’s worth it for the distinctive vantage point it offers of modernism, postmodernism, and Latour’s ideal “amodernism.” While his book deals with modernism as a whole rather than modernism in the arts, artists continue to mine it for inspiration, as evidenced by the MASS Gallery exhibition Mariah Dekkenga and Josef Bull: We have never been modern, curated by Jackie Klempay and Margit Raczkowski. Fortunately for viewers, Dekkenga and Bull haven’t gotten bogged down in the absurdity of the text. 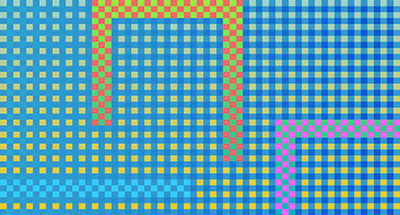 Bull is exhibiting a pedestal-based work, a brief YouTube compilation, and a series of bizarre didgeridoos made of painted PVC pipe in a variety of twisting shapes. The majority of these are mounted on instrument hooks on the wall, but the wildest of Bull’s didgeridoos wraps itself around a small folding table in the middle of one of the gallery sections. The shape gradually expands, bifurcates, and bends under and back over the table at unpredictable angles terminating in a double bell. The didgeridoos draw a quick line between present western culture and pre-modern peoples, although their presence alone doesn’t wholly support the notion that “we have never been modern.”

However, something was different the opening night of the exhibition that was more convincing; the center didgeridoo was played by local musician Steve Daniel, skilled in the circular breathing necessary to sustain the impossibly long notes of the traditional instrument. The cheap, tinny noise I expected couldn’t have been further off the mark; The sound is deep, oscillating, woody. There’s something in the multiple frequencies that resonates with the human body itself, and this without the high decibel level usually necessary with other instruments—say bass—to reach the same effect. The didgeridoo, plastic though it may be, becomes magical, something with a voice, something almost self-willed (a very non-modern object in comparison to Latour’s “mute non-human things”). It causes the viewer to guess at the voice of these other wall-mounted instruments, bringing these alive as well.

The viewer moves through the healthy skepticism of the post-moderns (“these are just objects made in cynicism to point out how ridiculous people are who try to bridge such cultural gaps…the artist hints at an unfillable void of our current situation”), then a modernist proclamation (“This is an unjaded approach, making connections between our culture and others, but also maintaining deep separation from them”), and then upon hearing the instrument, an amodern non-criticism, (“Hybridity and purity both exist. The boundaries that separate us are less solid than we have formerly thought. I am not an Aborigine, but what’s to say I’m not hearing this in the same way that an Aborigine would?”) It’s Latour’s argument summed up succinctly through non-language. 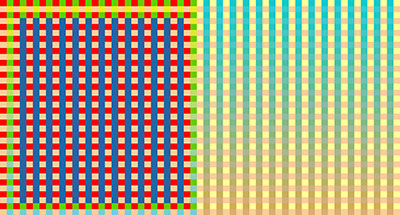 Mariah Dekkenga’s work seems more rooted in the actual words “we have never been modern” rather than than the book itself. It’s through Dekkenga’s work that the viewer becomes aware of both artists being born in a post-modern age. Born in 1978, Dekkenga has been educated equally by café derivatives of abstraction as well as the expressionism,  minimalism, and other -isms gleaned from art history. Dekkenga uses the aesthetics of modernism without taking on the political baggage that a historical view would demand. Her simple large paintings Gingham Tablecloth 1 and 2, both blurred red on white, link the kidney-shaking sound of the didgeridoo to the exhibition’s other motif, gingham cloth. The artist encountered the pattern first in her native America as cheap plastic tablecloths often used at picnics and again in her current residence of Qatar in the form of traditional gutra headdresses. The cloth is equally native to Japan, Indonesia, Masai, and the majority of European countries. It holds conflicting histories in each.

Dekkenga uses the cloth again in a massive projection opposite Bull’s primary didgeridoo. Here the gingham colors slowly shift, than dramatically change colors in segments, than slowly shift and vibrate, than dramatically transform again. It’s another visualization of the didgeridoo moan, and also a reflection of the patterns slippery untraceable history, both links from now to a not so separate premodernism. Creating further links, Dekkenga has made the projection available as a screensaver on MASS Gallery’s website for the duration of the show.

The exhibition is less complex than Latour’s seminal book—but that’s not a bad thing. The show, or at least its opening, is in many ways more convincing than the text that inspired it, although it also does not require the same burden of proof that the book does. That aside, it is significantly more enjoyable, and like Latour’s book gives its viewer a new outlook on some of the arbitrariness of modern separations, making connections beyond the physical and temporal borders of western culture.

Mariah Dekkenga and Josef Bull: We have never been modern
MASS Gallery
Through July 19