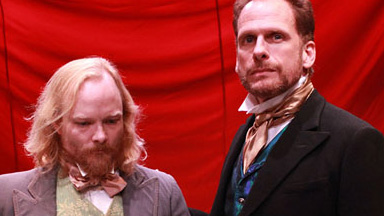 Tom Stoppard’s “The Coast of Utopia” might be a harbinger of a new Theater of the Impractical. Three plays, prostate topping out at a total of nine hours (give or take), “The Coast of Utopia” is a head-spinning swirl of locations, characters, and heady philosophical discourse. This production at Main Street Theater marks only the second production of this epic in the United States – after the premiere production at the Lincoln Center. Main Street deserves accolades for taking this club-footed giant of a play cycle on, committing to not one, but three almost three-hour plays.

Part Two, “Shipwreck,” sticks us smackdab in the middle of the real-life implications of the philosophical upheaval of the mid-19th century. Unfortunately, throughout much of the play, we get far more of the philosophy and not as much of the upheaval. At times the equivalent of watching a bunch of well-read graduate students argue about philosophy and politics, to call the script clunky is putting it lightly; Stoppard’s kitchen-sink playwriting has gone over the top here, and he packs as much Russian and European history into the run of “Shipwreck” as he can. The audience is left sorting through a cast of 23 and their various intrigues, opinions, affairs, and fallingouts, all of them historical. Be prepared to whip out your phone and furiously search Wikipedia during intermission.

There are several standouts among the cast, including Joel Sandel, who is subtle and deliciously bitter, Seán Patrick Judge, who is charming as the feckless Ivan Turgenev, and Guy Roberts, who can only be described as magnetic. Kudos should also be given to Elissa Levitt, who fascinates, and Kregg Dailey, who is endearingly natural, despite their small roles. Joe Kirkendall, as Alexander Herzen, the focus of the play, is an able enough performer, although as he broods his way through the play I found myself more interested in his friends.

The benefit of Stoppard including so much material in his script is that there is truly something for everyone, and even if you are lost for much of it, at some point they are bound to expound on something you find familiar, even if you only vaguely remember reading about it in your sophomore political science class. The play is handily rooted in a compelling personal drama worthy of any soap opera, and even if you only hear static when the discussion of politics, utopianism and Russian literature kicks into gear, the politics of polyamory are bound to hold your attention.

Main Street ultimately deserves credit here. Long known for producing intelligent contemporary theater, this play seems a kind of culmination of their aesthetic, and represents a bold artistic step forward for the mid-sized theater. Despite Stoppard’s problematic script, the intimacy of the performance is gripping; I’m already looking forward to the next installment. If you are one of those that flock to the theater seeking a little magic, know that there is a little magic to be found here.

— ZACHARY DOSS
Zachary Doss is a freelance writer. He has his BA in creative writing and theater from the University of Houston.