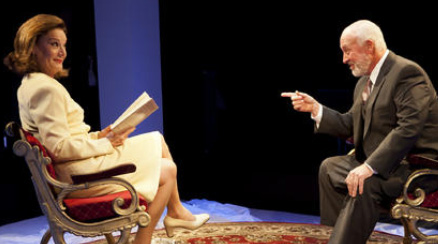 I should first confess that you may count me among the people who didn’t like Yasmina Reza’s God of Carnage. Are there other such people, or was it just me? It expressed a worldview that I felt had so very little to do with how I lived my life, or how anyone else I knew lived their lives, and I could not quite accept that we are all in one way or another secret barbarians waiting to wreak havoc.

After seeing The Unexpected Man, I am at a loss to understand why God of Carnage has received so much more attention.  The Unexpected Man has everything to do with the way we live our lives. It is a play about how time eats us – how our lovers age and die, how people who were once our friends and fans and great supporters grow to find us repetitive and dull. It is a modern day answer to Jean Paul Sartre’s No Exit; hell is other people, but not because you are forced into contact with them, but because you lose them one way or another. It explores the kind of alienation that people in their twenties can only guess at (in the interest of full disclosure, this writer is in his twenties).

If the play is that good, Stages’ production suits it. James Belcher and Sally Edmundson nail these characters. The curve of Belcher’s lip is, indeed, bitter, but we still get a sense of him as an essentially likeable old man, while Edmundson evokes something elegant and old-world, but human and self-conscious. She reminded me of nothing so much as an aging Sophia Loren, with the heart of a schoolgirl.

The design is so cohesive that director Seth Gordon and designers Kevin Holden (set and lights), Tim Thomson (Sound), Macy Perrone (Costumes) should all be congratulated; this is a real meeting of the minds. The set is designed to look like a giant clock, but also a kind of afterlife – the actors are suspended on a rotating platform in the middle of a white nothingness. I did occasionally wonder why the lighting design drew so much attention to itself (I spent some time trying to reason out the logic behind their changing colors), but ultimately that just contributed to the otherworldly quality of the design.

Some plays ring truer than others, and this one rang true for me. After seeing it, I think if Yasmina Reza and I found ourselves sitting across from each other on the train, we would have something to talk about.

–Zachary Doss
Zachary Doss is a freelance writer. He has his BA in Creative Writing and Theater from the University of Houston.