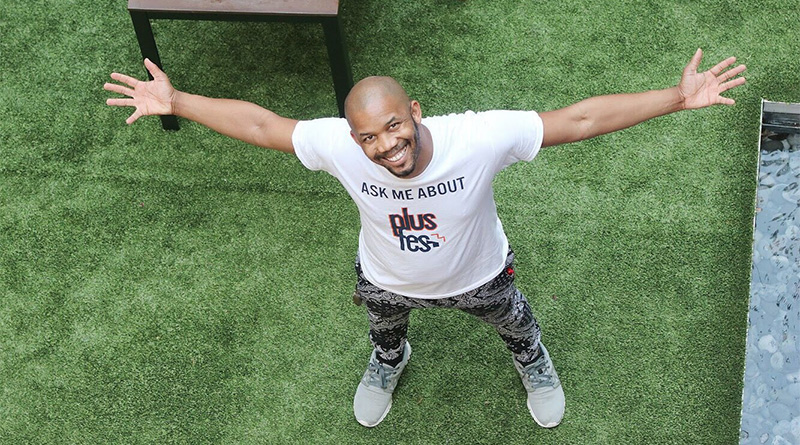 Outspoken Bean at the first Plus Fest May 27th 2017 at Esperson Gallery at Greenstreet.
Photo by Pin Lim.

Outspoken Bean isn’t his given name. He’s been going by “Bean” for a long time, his actual last name, and picked up the Outspoken part while in college. But Outspoken Bean is the shortened version of his full stage name, Outspoken Rogers Lee Bean, Jr., after his older brother who was murdered one day before the largest Slam Poetry competition Bean had ever been in. His brother was a mentor, a coach, a connection to a specific and special type of audience, and Bean keeps his name as his stage name “so he can tell this story, to remember his brother and keep him alive within him.”

This heavy topic was the first thing we covered during our conversation. Bean’s connection to his brother is important, so it’s good to address that first and let it inform the rest of what you are about to read.

Bean describes himself as a Performance Poet/Spoken Word Artist who is engaged with the Slam community. The word “slam” implies only the element of competition and is not a genre. Bean points out that you can use any style of poetry to compete in a slam competition, even the humble haiku.

Bean traveled around a lot as a child. His family settled in San Antonio where he went to middle and high school, which is when he started rapping and freestyling. From there he went on to study theater at Prairie View A&M and started to get into poetry, admittedly at first, “only to get girls.” Listening to him talk about his evolving monikers and outfits (there were berets) is both cringeworthy and adorable.

Despite these modest beginnings, Bean’s poetry career began to take off. He started a poetry open mic and formed the first Slam team at Prairie View. Prairie View Productive Poets, aka Triple P, was the first team from a historically black college to attend the College Unions Poetry Slam Invitational (CUPSI) national competition, placed eighth out of 50 competitors that first year, and is still competing today.

After graduating in 2008 with a theater degree, Bean moved to Houston. His eventual goal was to make his way north, starting with Austin and ending up in Chicago or New York. He was working odd jobs around town when Shannon Buggs, then a writer at the Houston Chronicle, invited him to coach the Houston Young Authors, a youth Poetry Slam team in April of 2009. While he had several other projects cooking, Bean says that’s what really kept him here. The name later changed to Meta-four Houston and still exists almost ten years later as a program at Writers in the Schools (WITS), where Bean currently serves as the Meta Four Project Coordinator and a WITS Evangelist.

Around the same time, Bean attended every open mic event he could find and often performed every night of the week. He wanted to get his name out there as a Poetry Performer as much as possible. He toured colleges and collaborated with other artists across varied genres. But there were a few things he says really led him to where he is now.

In 2010 he auditioned for Houston VIP, the most decorated of the Houston Slam competition teams, and made it. He would go on to make the team five more times. Beginning in the summer of 2011 he was accepted twice to the Watermill Center’s International Summer Program, where he spent two months in the Hamptons collaborating on large scale projects with artists across genres under renowned theater director Robert Wilson.

“Watermill placed me in an opportunity to create outside of my comfort zone,” Bean says of the experience. “I was not just creating what I was used to. I was collaborating with artists from around the globe and from multiple disciplines. I had to find how Poetry could complement their craft and how their craft complements mine.” He created a one man show, Converse, founded on the work he did during these two summer programs and toured off and on from 2012-2016. Converse went all the way from Trinidad to Cornell and even to Off Broadway.

The title of his one man show reflects where Bean says most of his inspiration comes from: conversations. He is chatty, easy to talk to, even easy to open up to – and says that most of the ideas that inspire his poetry sprout from the conversations he has every day. With all of the driving he does to and from classes, workshops and performances, he treats his car as his office and works out most of his pieces while sitting in that famous Houston traffic. Most of the time the poems rattle around in his head long enough for him to write them down, but of course sometimes they don’t, and Bean says that’s just a part of the process.

More recently, Bean was selected for the City’s pilot (and NEA funded) Resident Artist Program and was assigned the Near Northside neighborhood. He has been the host of every event possible in the area, recorded a Viceland interview and rode the metro to meet residents, hear their stories, and write on-the-spot poetry based on his interactions. His goal is to have the poems displayed along the metro rail in Near Northside. He is also working on a project for the Houston Ballet with Houston Poet Laureate Deborah D.E.E.P. Mouton to be performed live as part of Play on June 8-10 at George R. Brown’s Assembly Hall. Bean notes that this is the first time a project like this has been in the Houston Ballet’s season.

The biggest project Bean produces is Plus Fest, “the everything plus poetry festival” he created to bring poetry and spoken word to the forefront by marrying it with other artistic genres. The one-day event will have it’s second go around this May 19 at Buffalo Bayou Partnership, with headlining performances by G. Yamazawa and Dee-1. Bean is a lover of festivals in general and says Day For Night had a huge influence on why he wanted to start Plus Fest because it was such a great example of what could be done within the genre outside of music. He also frankly notes “it feels good to create something that is your own. I want to build something and foster creation. I like the challenge of how to make it better next time.”

One of the new features Bean is most excited about is Poetry on the Bayou, a live performance on a boat that will travel up and down Buffalo Bayou. The festival won’t be Houston specific either, or even Texas Specific. Drawl, a podcast based in Baton Rouge, Louisiana that focuses on Southern poets, will be on hand to record a live episode, along with many other internationally recognized artists.

An energetic pioneer for poetry, in all it’s different sizes and shapes, Bean is dedicated to making sure poets get heard. For someone who originally intended to use Houston only as a stepping stone, Outspoken Bean has made a name for himself here, and more importantly, a place to call home.