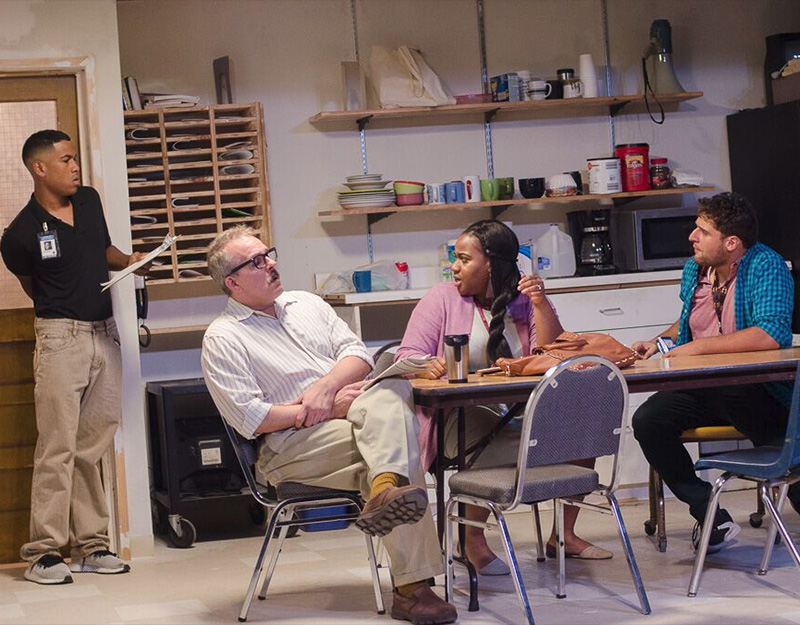 When should we fight the good fight? When do we surrender to survive another day, and when should we give up and put on the comfortable armor of cynicism? These are the questions asked by the teachers and students of one Chicago high school in Ike Holter’s Exit Strategy.

Directed by Matt Hune, Rec Room artistic director, Exit Strategy (now through October 15) looks at first glance to play out as an issues drama, one confronting the frustrating realities of U.S public school systems where education and the delivering and receiving of knowledge is treated at times like a failing franchise business.

Those educational and political issues do get an airing as depicted in the daily lives of a frayed band of teachers attempting to educate one last year at a school marked by the city for closing. And there are jabs to be had at how we give lip service but little else to education especially in inner city school, but thankfully any didactic social commentary sits mostly quiet in the back row with Holter’s good story standing at the lectern.

On another level, Holter’s sharp and many times cuttingly-funny dialogue along with Hune’s empathetic direction (Hune is a teacher himself) takes this play into the realm of a comedy set in a workplace, though never really a workplace comedy.

Beyond the school setting, Exit Strategy also portrays a realistic, and again sometimes very funny, look at generational divides and attitudes, especially when it comes to activism and social change.

While never falling into stereotype, each teacher does seem to fit a familiar role. Millennial Jania (Michelle Magallon) is cynical before her time though not as world weary as the older Gen X Arnold (Greg Dean). Luce (Gabriel Regojo) is the enthusiastic puppy of the group only a little older than the students he teaches. Sadie (Melanie Burke) represents the no-nonsense mother archetype, while Pam (Susan Koozin), after decades in the teaching trenches, plays the hard-nosed, battle axe who still manages to inspire her students.

One such student is Donny (Miguel Cortes), whose intelligence and youth make for a dangerous combination. He believes that the world can still be changed for the better.

Yet not all heroes wear capes, some wear ID lanyards.

The generational divides depicted in the play resonate even greater with Hune and casting director Tasha Gorel’s excellent cast choices. Two very familiar Houston actors Koozin and Dean serve as experienced, steady anchors to the story. Regojo also has become a welcome addition to several productions across the city in recent years. But Magallon and Burke are relatively new (to me at least) to local professional stages and make quite an introduction for themselves. The two big finds are Jamison, who has to portray the most dramatic change of the group, while also bringing a big share of the comedy, and Cortes. According to the bios, Cortes only recently graduated from high school himself yet I’d put him in the running for valedictorian of the production. With the exception of a few opening nights slight flubs, the cast seem like they’ve been yelling at and insulting each other for many a semester.

There are beautiful directing and performance touches throughout, from the choice of which character picks up the break room during scenes changes to the growing look of adoration and love on one character’s face as another breaks into a rambling, yet inspirational call-to-arms.

To go much further might spoil some swift but earned plot and even genre surprises.

I can note that calling out Rec Room creative director Stefan Azizi for his superb scenic and lighting design for a show has almost become redundant. The realistic, boredom-inducing minutia of the production’s faculty break room, (complete with what looked like a century-old metallic wall heating/cooling unit) is a thing of beauty.

And now for the full critic disclosure epilogue. As a teacher myself, Exit Strategy should hit all the sweet moral outrage spots for me, and in many ways it does. But perhaps because I watched the students defending the barricades in the still gut-wrenching Les Misérables the night before, or perhaps because certain Senate Judicial Committee testimonies unfolded the day after, Exit Strategy lingers with me, not for its realistic looks at public school systems, but for its profound portrayal of the joys, pain and deep sorrow inherent in just caring about and for the world around us. Exit Strategy lessons us with no easy answers but assigns us one life-defining homework question:  Should we strategize our individual survival by leaving caring aside or do we keep on teaching on?