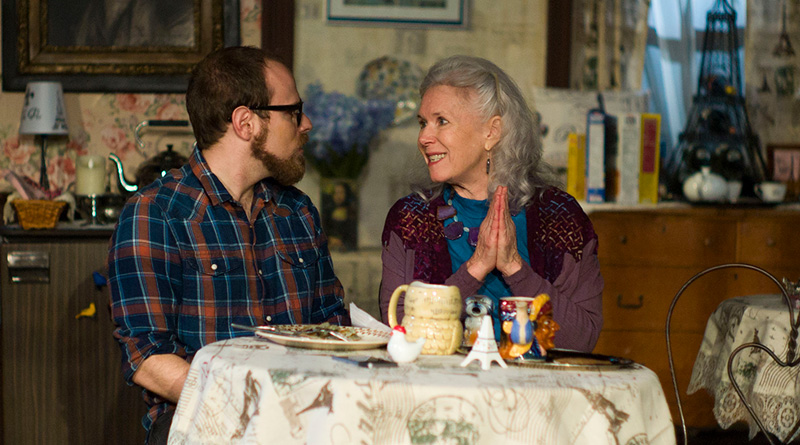 “The thing about being crazy is it can all also be true.”

As we’ve come to expect from Annie Baker, John, currently receiving its Dallas premiere at Undermain Theatre, is concerned with truth, in all its messiness and inscrutability. Jenny and Elias, a young couple played by Olivia de Guzman and Scott Zenreich respectively, find themselves at a small bed and breakfast in Gettysburg, PA, during the holiday season. Elias has always wanted to visit the battlefields and we learn quickly that Jenny has accompanied him rather begrudgingly, for reasons far messier than her cycle.

Their possibly relationship-salvaging retreat is colored by Mertis, the somewhat odd proprietor of said bed and breakfast, played at Undermain by a lovable Elly Lindsay.

Mertis is somehow exactly who you’d expect to find running a tchotchke-filled historic bed and breakfast next to a Civil War battlefield, a kind, slightly off-center older lady who has named her dining room “Paris” and is quick to share her obsession with fad diets. But as Elias and Jenny’s unspoken issues begin bubbling to the surface over the course of the play, Mertis too grows more complex and the role she plays in the couple’s life more intriguing.

This is a play for a certain kind of person. The kind of person who can laughingly relate to Elias’s observations about “the tragedy of bed and breakfasts” and how he can’t even imagine being a person who lives in Gettysburg, Pennsylvania, or snicker knowingly at Jenny’s characterization of her Brooklyn-dwelling boyfriend as a “drummer, well, drummer slash computer programmer.” Jenny and Elias are young city people, stereotypically attached to their phones and in love with their own cleverness. The kind of people who you really can’t help but hate, especially as played here by de Guzman and Zenreich, both making their Undermain debut. Their performances are solid; if you find Zenreich’s Elias a little whiny and de Guzman’s Jenny a little over-played, well, there’s a pretty easy argument for why any flaws in performance might just fit their Millennial-aged characters.

The play, in three acts, takes us through a progressive revealing of sorts, first Mertis draws out Jenny, then she moves on to Elias, bringing out the eccentricity and loneliness they both feel although have difficulty discussing with each other. Boundaries are crossed and truth is painfully revealed. Jenny’s frequent insistence that Elias tell her a story, if a crutch for her refusal to discuss her life with her partner, is mirrored in the new drive towards story-telling in the age of social media; I couldn’t help thinking, watching Elias and Jenny’s characters develop, of how we all perform in the 21st century, how we seek out eccentricity: not recognizing or embracing it in ourselves, we seek it elsewhere, in bed and breakfasts and lives its difficult for us otherwise to imagine, in order to recast that eccentricity as our own “unique” adventures on our disaffected Facebook profiles and Instagram feeds.

The mysterious presence of Genevieve, Mertis’s even more eccentric friend, played here by the always fascinating and in this performance often downright hysterical, Rhonda Boutté, and her seeming awareness of the audience, complicates the story and yet points to the truth of what Genevieve and Mertis are for our young couple: fodder for their perpetual attempts to obscure the painfulness of reality in stories, only this time, their stories characters are aware of their role in its telling.

Under the direction of Bruce Dubose, John, which doesn’t quite match the aching realism of Baker’s other plays, holds together extremely well, even with a troupe of Undermain debut performances (sans Boutté) and the relatively young de Guzman and Zenreich. Lindsay’s Mertis is a joy to watch, appropriately naïve and wise in turn, and just complex enough to defy any easy sizing up.

Successful playwrights achieve something which should be impossible; concealing and revealing truths at the same time. Good plays are never obvious, no-one wants to walk out of a theater feeling as though everything made total sense, that’s just not reality. But they also have to point to truth, there has to be something to which we as the audience, in all of our diversity, can relate. Baker is adept at bringing real life into the theater without coming across as trying too hard to be relevant and John, if it’s not perfect, really hits home.