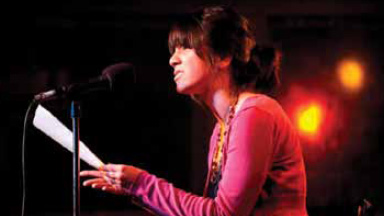 A puppet show with a blood cannon. A play about a young boy’s skateboarding adventure, advice where the audience follows the performance through a Montrose neighborhood. A play that includes a party during intermission as part of the plot. Welcome to theater, ambulance BooTown style. Founded in 2007 by a group of University of Houston graduates, advice including current Artistic Director Emily Hynds, BooTown has become synonymous with light-hearted productions that take performances out of the black box and into the restaurants, bars, and even the streets of Houston.

BooTown is perhaps best known for Grown-Up Storytime, a monthly event held on the third Tuesday of every month at Rudyard’s Pub in which actors perform stories submitted anonymously by local writers.

Grown-Up Storytime has been growing increasingly popular, drawing a record 100 audience members in August. Their upcoming project is a double bill.

“A Bloody Puppet Show,” which they describe as “GWAR taking over a Sally Jesse Rafael episode… ON ICE,” is paired with “A Sandbox Love Story,” which is “about how we all like each other but don’t know how to express it. So we hurt each other instead.”  Their website invites us to guess which one involves the blood cannon.

A+C writer Zachary Doss sat down for a cup of iced coffee with BooTown’s Artistic Director Emily Hynds to chat about the troupe’s past, present and future.

A+C: Fill me in BooTown’s history. How did you get started?

EMILY HYNDS: The founding members went to the University of Houston together. When we graduated, we didn’t know what we wanted to do, and whether we wanted to go to grad school, but we knew we were going to be here for a year. So we decided to start a theater company just to have something to do while we were here. Also, there wasn’t anywhere we really wanted to work, that was doing work we wanted to do.

A+C:   Now that BooTown has outlived that year and then some, what are your goals for the company?

EMILY HYNDS: When we started, we didn’t know how long we were going to last. We felt pretty temporary. Now we’re more established, and for the first time thinking administratively about the future and what our goals are. I think it would be really great if, long-term, whenever I or Lindsay (Lindsay Burleson, BooTown’s Associate Artistic Director, has been with BooTown in some capacity since 2008) is ready to move on, we could hire someone to take our place, so that BooTown is not just about me, and Lindsay, and the people that are running it right now. My biggest goal is sustainability.

We’ll never do a show in a traditional theater. Theater is more than just going to see a show in a box and sitting there and clapping when you’re supposed to. It’s definitely our goal, not just with storytime but also with our larger shows, to broaden our horizons and broaden our audience’s horizons. Hopefully our patrons get to go someplace new. I love Houston, so I really like it when someone comes to our show and discovers a new space as well.

A+C:  What is the nature of devised work for you?   What is BooTown’s process in devising original work?

I love devised work because it involves everyone in the project so intimately. Usually we (the BooTown team) will come to the table with a plot outline of a story or theme we want to explore, talk it through with actors and designers, and then get on our feet. A big part of building any show for us is creating a team, or “family,” if you will. If we are comfortable with each other, and love and respect each other, it makes bringing ideas to the table so much easier. A great thing about theater, whether you’re doing a traditional scripted piece or a devised work like we do, is the sense of community and family that it creates. I love that. I love making new friends, and then I love making art with them.

A+C:  Why do you resist longer runs in favor of one night or single weekend engagements?

Part of the beauty of theater is its fleeting nature. Single nights or weekends capitalize on that. There is something special about a “see it now or miss it forever” show.   Short runs make our work even more precious.

A+C:  Where did the idea for Grown-Up Storytime come from?

I have to credit Timmy Wood (one of the founding members of BooTown). We knew that we wanted to do a monthly, one-night event and we wanted to do a late-night thing in a bar that was kind of social. Finally Timmy came up with this idea for crowd-sourcing stories.

A+C:  How does Grown-Up Storytime fit in with BooTown’s other programming?

We are very interested in storytelling. Everything we do is storytelling-based, we devise all of our work out of stories that interest us. I think two of the most important things for us are that we want to do something that no one has ever seen before and we want to have fun, and we want our audience to have fun.

A+C:  Why did you decide to have the stories read by someone other than the author?

We wanted to give an outlet to writers and performers, and I think it’s healthy for writers to see what someone else does with it, and how the audience reacts to it. I think it’s a great exercise for actors, also, because it’s just telling a story, which I really think is the basis for all theater. We’re just here to tell stories.

A+C:  What have been some of your favorite stories?

There was one about a girl whose boyfriend wanted to have sex with her while wearing a union suit. I loved the one about the girl going to the abortion clinic. It was a total bummer, but I loved it. We’ve had 39 storytimes, so it’s hard to remember. Sometimes I go to our YouTube channel and just watch old stories, because I forget them, and there have been some good ones. They’re always surprising.