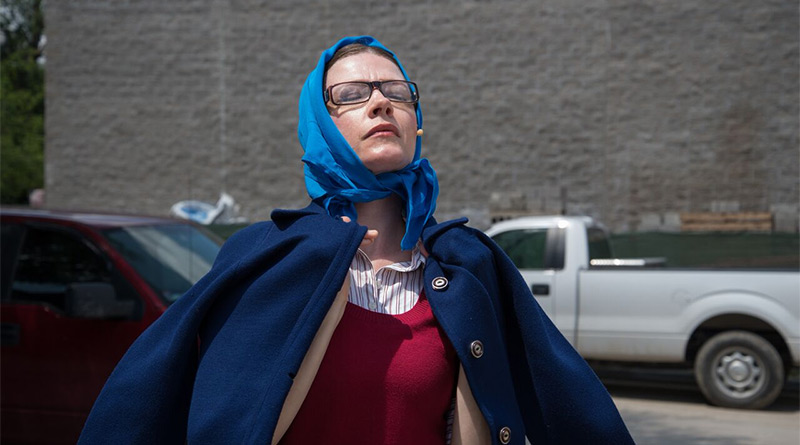 This Page Left Intentionally Blank or Not: Big Dance Theater at CounterCurrent

Tymberly Canale in Big Dance Theater’s This Page Left Intentionally Blank at the Menil Collection as part of CounterCurrent 2016.

“Don’t look at that. That’s not part of the tour,” is a phrase used by absolutely no museum docent ever, until Tymberly, the new Menil Collection docent, had me in her guiding clutches. Yet, Tymberly commanded with such a loopy and dreamy voice, I didn’t feel admonished. Perhaps, I also didn’t feel like a child scolded because I had intentionally come to play for an hour in Tymberly’s weird docent-ruled domain that is This Page Left Intentionally Blank, the performance art piece from New York’s Big Dance Theater, which made its world premiere at the University of Houston Cynthia Woods Mitchell Center for the Arts’ CounterCurrent Festival 2016.

A docent guided journey through a museum can be something of a performance in itself, a kind of dramatic monologue that just happens to use props and set pieces, like a Degas painting or dinosaur bones or perhaps the Declaration of Independence. And doesn’t the docent and actor usually want the same thing for her tour group/audience, to see this bit of the world in front of us in a new light or from a new perspective?

Conceived and directed by husband and wife team and Big Dance Theater founders Annie-B Parson and Paul Lazar, This Page makes the familiar act of both the audio and live person guided tour of any museum exhibition into a part dance, part theatrical performance, part philosophical think-oration on the act of seeing and interpreting. Parson and Lazar also throw in some fascinating insights into the minimalist sculptor Dan Flavin’s work for good measure. If This Page Left Intentionally Blank wasn’t experimental and surreal enough (after all the setting is the Menil Collection), it also asks the audience to actively contribute to the performance, while helping to fill in that blank page with their own interpretations.

Individuals arriving at the Menil are given a headphone set and then gathered together in front of “Tymberly,” played by Big Dance Theater associate artist Tymberly Canale, to become something new: a tour group/audience. With help from production manager, Brendan Regimbal, who also controls the sounds seeping into our heads, Tymberly guides us to our ultimate destination: Dan Flavin’s large fluorescent-light installation a few blocks away in Richmond Hall. The journey from the Menil Collection’s main building to Flavin’s Untitled, 1996 becomes a kind of journey deeper into Tymberly’s psyche as she worms her way into our own. At her bidding, we think about the subjective experience of crossing a road, take in an operatic interlude while watching some orange construction mesh in an empty parking lot and delve into the etymology of the word museum, before finally entering the Flavin work through a door marked “Danger” and “High Voltage.” Then it was time for everyone to dance.

No matter how philosophical or esoteric, This Page never takes itself too seriously nor loses its sense of performance as play. We were, in fact, such a good, well behaved group that Tymberly bestowed a sweet, icy treat on us before exiting to where ever docents go, dissolving into the rarified art ether, I assume. In the end, this theatrical tour, dancing lecture could have been crushed under its own self-important, We’re-Doing-Serious-Art-Here weight, but it was all just so very lovely and goofy, it instead fluttered along like a docent’s notecard accidentally dropped and taken by the wind.