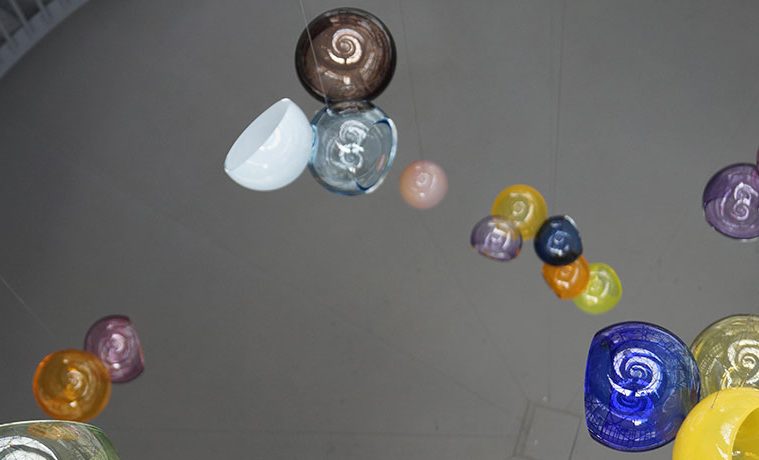 ALL IMAGES: Michael Petry, AT the Core of the Algorithm, 2014. Courtesy the artist and Hiram Butler Gallery. 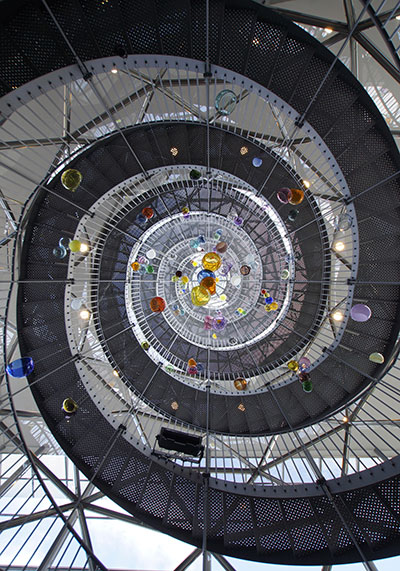 This month, Hiram Butler gallery in Houston presents AT the core of the Algorithm (April 11-May 30), a large-scale, glass installation made by multi-media artist Michael Petry, completely remade from its recent showing at GlazenHuis in Belgium. The work is based on an algorithm devised by El Paso-born Petry, in collaboration with highly skilled glass blowers, and derived from the mathematical notion of the multiverse.

Everything about the work is calculated, from the shapes, rich colors and highly reflective surfaces of the suspended glass objects, to what is revealed or referenced in those reflections. For the show at GlazenHuis, the glass objects were grouped in prime numbers and reflected the swirling staircase of the tower in which it was installed, in this case, resembling the Milky Way. The reconfigured installation at Hiram Butler will emphasize horizontality so as to directly relate to the gallery space, illustrating the infinite number of possible solutions to not just AT the core of the Algorithm, but any equation.

Petry explains that, in large part, the piece is a monument to Alan Turing, who is widely considered to be the father of modern computing and who formalized the concept of the algorithm with the “Turing machine.” Most contemporary audiences will be familiar with Turing thanks to the recent film, The Imitation Game.

“There are numerous stories that are involved in the piece, and a lot of my work is multi-layered,” says Petry. “You see it on one layer, and it is this beautiful glass object— just a lovely thing. You can leave it at that, or you can look into the mathematical aspects and the multi-verse, art history, or a contemporary narrative.”

Turing is an important figure and his story a touchstone for Petry not only because of his mathematical prowess—during WWII he broke the Nazis’ so-called “enigma” code through the use of algorithms—but because of his position in history. Turing was a gay man, during a time when it was illegal to be gay in the UK.  After a break-in at his house following the war, Turing went to the police to tell them he thought he knew who did it. He was outed, arrested, and tried when the police asked how he knew and he referred to the suspect as “my boyfriend’s friend.”

It’s a horrible historic irony that the man who contributed so much to saving the Allies in the war would eventually be tried and sentenced by the very country he fought to protect. 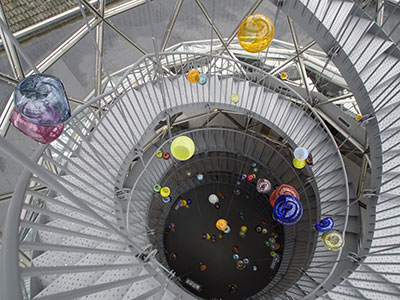 The physical shape of the glass objects of AT the core of the Algorithm—rounded, with one open piece—also refer to Turing. “Officially,” Turing died after ingesting a piece of an apple laced with cyanide, but in actuality, the details of his death remain a mystery. Various people believe he committed suicide; others believe he was murdered by the British Secret Service, with many agreeing on the bitten apple as a symbol of consequence, showing up everywhere from the Bible to Snow White. What we know of Turing’s life, and death, just like the objects in Petry’s piece, is incomplete.

In addition to the exhibition at Hiram Butler, Petry returns to Rice University, his alma mater, to deliver the Campbell Lectures, April 7-9. Each talk touches on a different angle of Petry’s practice, beginning with Growing Up in Public, in which he will provide a survey of his prolific practice, focusing on his larger works. The second lecture in the series is Reading a Life, an overview of his work as an accomplished critical writer. Petry has penned approximately 20 texts that include books, catalogue essays, chapters in academic books, and more.

Petry explains that the third lecture, The Art of Ethics, is a completely new topic for him, and one included in his upcoming book, which is slated to come out next year. He is not known for timidity, and this lecture, the most controversial of the three, should not disappoint.  Petry draws heavily on his experiences as an artist, as director of MOCA London (he’s been a resident of London since 1981), and co-founder of the Museum of Installation, in asking, “What is ethical funding?”— a question that is bound to disturb the art-waters of our Third Coast.

Taking the position that the money has to come from somewhere, Petry points out that accepting funding from ethically questionable sources (whether corporate funding or individual donors) is not illegal. So what is the institution to do? As he champions transparency and honesty in ethical funding, he also challenges institutions in terms of how they deal with such issues as homophobia, racism, and misogyny, which he often addresses in his own art practice.

The reward for accepting this challenge is great and, according to Petry, might even help Texas define itself more clearly in terms of the position it holds on the international art map. “Its not that we have to be perfect,” he says, “but we have to be aware that we have to try.”