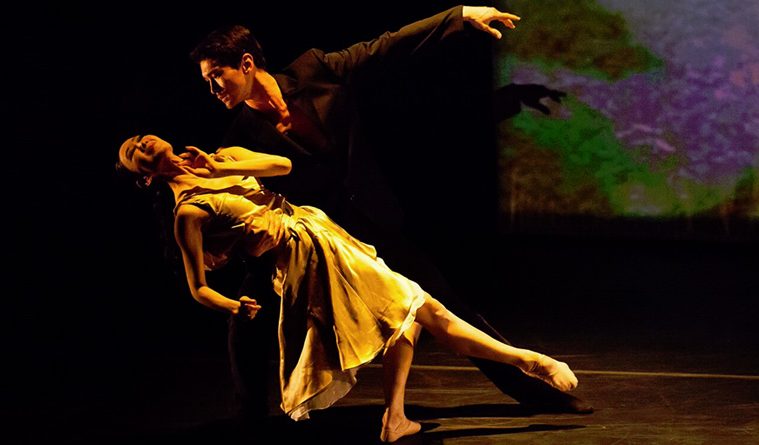 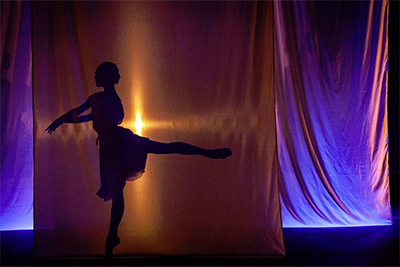 I see a trend, at least I hope it’s a trend. I am going to call it artisan DIY programming. It happens when a single vision is realized through the efforts of mostly local artists and organizations. And more importantly, the project is sustainable, doable and within the mission statements of participating organizations.  Often, key partnerships are involved. What’s most important is that this is not drop in the box programming. It’s home grown, originating from relationships forged by the meeting of administrators and artists, with enough buy in from everyone involved to make the project come to fruition. Tsuru, recently premiered at Asia Society Texas Center, was just such a project.

Tsuru is the brainchild of Houston Ballet soloist Nao Kusuzaki, and realized through the efforts of Asia Society’s Evan Wildstein in partnership with Houston Ballet. Tsuru involved a contemporary and abstract re-telling of The Crane Wife, a popular Japanese folktale that tells the story of a man who marries a crane disguised as a woman. She weaves textiles from her feathers, which eventually causes her to wither and fly away. Love, sacrifice, deception and the impermanence of beauty are all at play. 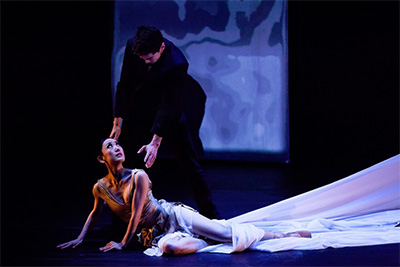 Kusuzaki, known for her lyrical style, is mesmerizing as the wife/crane. Her port de bras conjure wings, while her rapid fire bourrees suggest a relentless and bird-like energy. Yet, she transforms into a human with such ease. With Kusuzaki, simply walking across the stage to deliver the textiles is spell inducing. Charles-Louis Yoshiyama, a powerhouse dancer, embodies the role of the husband with a stoic gusto. He has the tight center of a Luigi jazz dancer, yet there are passages where he seems to bust out of his own skin with wild abandon. Both Kusuzaki and Yoshiyama possess the restraint to adhere to Tsuru’s sense of minimalism, thanks to Kenta Kojiri‘s spirited, but economical choreography. Kojiri’s formal approach, with occasional expressive flashes, worked well, while dancers Shahar Dori and Zecheng Liang nobly served as a kind of Greek chorus, moving the story along through well punctuated transitions. 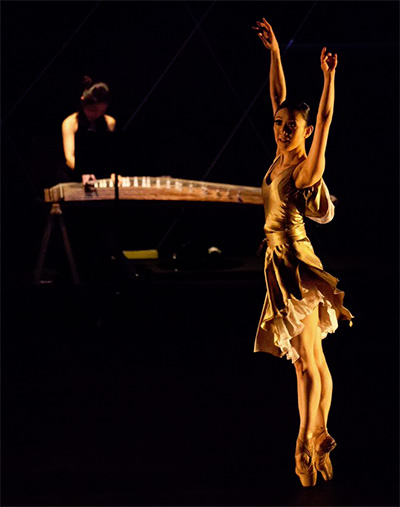 Ryan McGettigan’s set of cascading screens created a serene, but ever changing landscape, delineating the space with strong vertical lines. A pattern of crisscrossed wires separated the musicians from the dancers just enough to keep these worlds in conversation without too much interference. Lighting designer Renée Brode bathed the stage in an otherworldy glow, playing with the idea of a parable through the layering of light and projection.

The musical selections varied from Bach to Yumi Kurosawa’s original compositions, played live with cellist Lachezar Kostov. Having the musicians on stage, visually so well framed by McGettigan’s set, established their roles as essential participants in the performance.

More than anything, I so appreciated that Tsuru contained one idea, expertly and elegantly executed, and all within an hour’s time. Director Matthew Ozawa seamlessly balanced and blended dance, music, light and set to create a delightful chamber ballet, spare in scope, but so satisfying from beginning to end. How rare to see a piece that does not require editing!

Congratulations are in order for entrepreneurial and creative spirit of Kusuzaki and the “can do” vision of Wildstein for bringing this project to the stage. This is what can happen when artists and organizations get to know each other. Let this be a model for artisan programming and let this be one of many collaborations between the Houston Ballet and Asia Society.