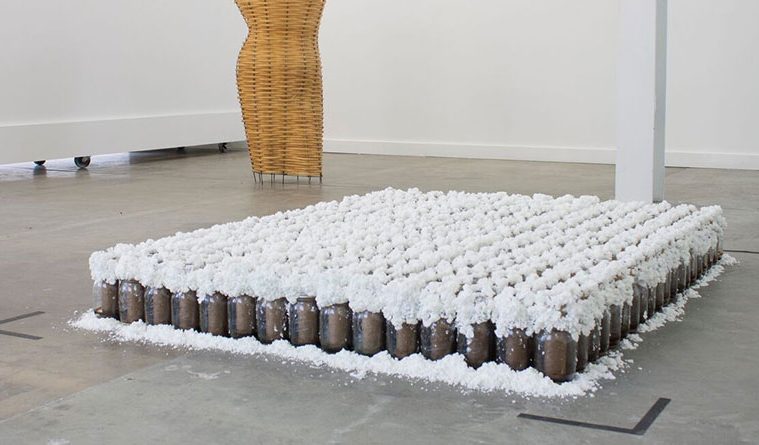 Where You End and I Begin 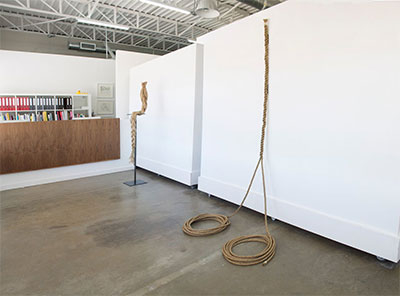 Cydonia Gallery has become known for national and international programming served up with more than a hint of aesthetic theory.  This may seem like the way things ought to be, or come off as controversial (challenging and rigorous to some, and too much for others), but it works nonetheless, reminding people in the Dallas art world that they should know both their art history and theory. From the title alone, the references to critical theory via Adorno and the Frankfurt School collide with Nicolas Bourriaud’s Relational Aesthetics and suggest experiential polarity, interplay, and the spatial and conceptual dialog taking place between two artists. Frances Bagley and Ryan Burghard, based in Dallas and Portland respectively, primarily work in sculpture. Their work is strong and meaningful, and plays well off of each other.

Frances Bagley has been part of the local art scene for decades. Her work has been exhibited widely and collected on an international level.  Her sculptures are thoughtful expressions of emotional intensity that examine the female form through the use of an ever-changing choice of materials.  When compared to Burghard, we see two artists of different generations whose approaches, while different, seem to tackle similar ideas and subjects precisely because their concerns surround universal themes.  In his case, an investigation of human relationships and interaction takes place through an intellectual lens that complements Bagley’s more emotional approach. 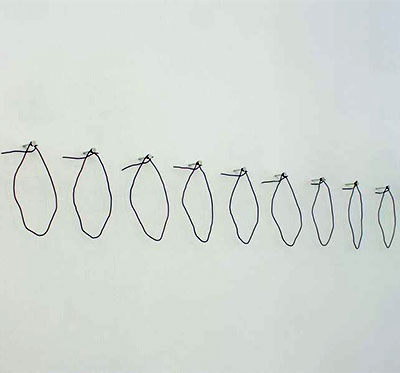 In the entrance space three sculptures, two by Bagley, greet visitors with excitement.  Bagley’s Perch, an imposing piece from 2000 never before exhibited, signifies the authority commanded by the artist.  Fabricated of organic fibers with a blond hue, they form a female figure of woven material that looks like braided hair.  The figure rests on a metal perch that resembles the structure a bird might sit upon.  Conceptual in nature, the piece conveys ideas that range from the female body, to tasks little girls learn like how to braid hair, or how to sit in a particular position.  Perch is set into a dialog with Burghard’s Hold, 2015, made of rope that stretches forty-five feet in length. The woven nature of the materials and the color ties them formally. In Hold Burghard takes two strands of three-pronged rope and unravels them in order to re-braid them into a single strand with six parts.  His work is an examination of two people coming together as one in a marriage perhaps, as well as a challenge to examine aspects of himself outside of the masculinity that society overlays onto men.

For Burghard this could also be read as a self-portrait of his relationship, two people bound together in life.  Facing this piece is Bagley’s Self Portrait with Braided Hair, 2000, made of human hair and steel.  Here, the hairs are bound into a type of collapsed grid that hangs from a metal structure such that it resembles a shawl or a dress.  This portrait suggests a frail and vulnerable state that has an alternate strength in the woven structure. Perhaps this is part of the internal dialectic at work within this piece, and among all three in the entrance space at Cydonia. In total, the exhibition includes twelve pieces with similar rigor and challenging materials that faithfully examine two aesthetic sensibilities that go quite well together.

Frances Bagley And Ryan Burghard
Where You And I Begin: Relational Dialectics
Cydonia Gallery
Through Jan. 15, 2016