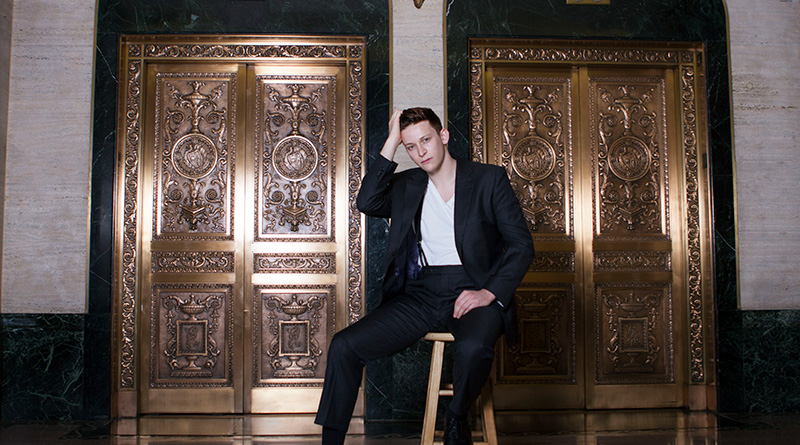 The Ivy Leaguer tore up his career plan. For his first two years at Princeton University, Aryeh Nussbaum Cohen had majored in public policy, figuring he’d go to law school and work in public affairs. Then a summer project stirred his love for singing, which went all the way back to his childhood.

Cohen switched his major to history so he could explore the background of the 17th- and 18th-century music that most drew him. As graduation approached, he applied to graduate schools and fellowship programs, hoping to flesh out the musical side of his education.

“I got rejected by everything I applied to, all in about a week’s time,” Cohen says. “I really thought my life was over—having gone from my public policy plan to this more-volatile dream—but I was able to use that to light a fire of motivation. I wanted to show everyone that I did have something to contribute.

“I said, ‘I’ll move to New York, and I’ll work as a standardized test tutor. I’ll do all my training independently and assemble my own program,’” he recalls. “That’s what I did the past two years. It ended up working out way better than I ever could have imagined.”

No kidding. Winning Houston Grand Opera’s Eleanor McCollum Competition in 2017 landed him a spot in the HGO Studio, where he’s now the first countertenor in the young artist program’s history. A few weeks after his Concert of Arias victory, Cohen also topped one of the voice world’s most prestigious contests: the Metropolitan Opera National Council Auditions.

Cohen arrived in Houston mere hours ahead of Hurricane Harvey, which left the new resident and his apartment unscathed. HGO introduced him to its audience in last fall’s staging of Handel’s Julius Caesar, which amounted to countertenor-palooza—putting Cohen alongside Anthony Roth Costanzo (incidentally, the 2010 winner of the McCollum) and David Daniels, two of the best-known countertenors today. Thanks to his voice’s youthful bloom, along with the panache of his singing and the liveliness of his stage presence, Cohen made a mark of his own in the midst of his more-celebrated colleagues.

“Aryeh has a complex set of gifts in which we want to invest,” says HGO artistic director Patrick Summers, who conducted Julius Caesar. “Great voices have a sonic imprint, every bit as distinct as a fingerprint. Aryeh’s countertenor voice type is extremely rare, but he represents an artist who could resurrect works from the vast repertoire of Renaissance and Baroque operas, much of which remains undiscovered and unperformed in modern times. This bodes for an exciting future for him and for the opera world.”

Cohen discovered singing almost by accident. Visiting a friend one day as a sixth-grader in Brooklyn, he recalls, he was “just humming along with something,” and his friend’s mother overheard. She told his parents, “He’s pretty musical. You should do something with that.” They promptly put him into a group that rehearsed near the family’s home, the Brooklyn Youth Chorus.

“We got to do a lot of classical music work with the New York Philharmonic and all these different orchestras at Carnegie Hall and Lincoln Center,” Cohen says. “And we sang backup for Elton John and Billy Joel and Sting and Sheryl Crow and James Taylor—really amazing artists.”

Cohen began all this as a boy alto. When his voice changed, he made a discovery. “I didn’t know what a countertenor was,” he says, “but I could finagle myself to sing those same notes. Not thinking anything of it, I kept singing alto in the choir.”

Even though he attended New York’s Fiorello H. LaGuardia High School of Music & Art, of Fame fame, music never struck Cohen as anything other than a sideline, he says. His aspirations went toward public affairs. But during his sophomore year at Princeton, Cohen won a school lottery for a free ticket to the Metropolitan Opera. One of the company’s most opulent stagings gave him his first experience of opera.

“It was La Bohème—the famous (Franco) Zeffirelli production,” Cohen says. “The grandeur of it, the glory of the singing—it blew my mind.” His interest in music rejuvenated, Cohen landed a fellowship grant that let him spend the summer studying singing. He attended Baroque music workshops and took a few lessons with countertenor Costanzo, Princeton class of ’04.

“The feedback I got was that I had ‘innate musicality,’ whatever that is, and that if I put myself to this, there was some slim chance that I might be able to make it work,” Cohen says. “That was enough encouragement, along with the love for the art form that I had just birthed, that I said, ‘You know what? I’m going to give this a shot.’”

The graduate-school washout didn’t stop him, obviously. The San Francisco Opera took Cohen into its Merola Opera Program for budding artists in summer 2016, and the company helped set him up to coach with countertenor Daniels before the Met contest. Cohen gained more experience last summer through the training program at Wolf Trap Opera in Virginia.

Now, HGO is sending him into an opera that ordinarily has nothing to do with countertenors: Richard Strauss’ blockbuster psychodrama Elektra, which opens Jan. 19. Cohen plays one in a quintet of maidservants who mock the opera’s unhinged heroine. The roles usually go to five women, of course. But David McVicar’s production, Cohen notes, turns the servants into an almost genderless group fitted out with bald caps, outlandish eye makeup and ragged costumes.

“It’s exciting to do something that’s so different from anything I’ve ever done, or anything I’ll do for a long time,” Cohen says. Though he has only encountered Elektra once as a viewer—in a Met performance featuring Nina Stemme, the Swedish fireball who performed Richard Wagner’s Isolde with HGO in 2013. That was “a life-changing night at the opera.”

“The case I make for opera as an art form is that, when it’s done right, it has the capacity to express the highest highs and lowest lows of the human experience better than any other art form—in my opinion,” Cohen says. “Seeing Elektra that night was one of the best cases for that theory that I’ve ever experienced.”

HGO will showcase Cohen in the up-close-and-personal surroundings of the Rienzi house museum May 10 and 13, when he shares a recital with other Studio artists. But first, Ars Lyrica, which has a tradition of capitalizing on the young singers HGO brings to Houston—will borrow him for concerts in February and April. Cohen joins the Baroque group Feb. 16 for Handel’s Esther, which dramatizes the Old Testament story of the Queen of Persia who saves the country’s Jews from extermination. Cohen thinks back to his boyhood in the children’s choir.

“Around Christmas time, I would always be singing Christmas carols, but I was wearing a kippah, yarmulke and tzitzit,” he recalls. “It was always a running joke in our family—this outwardly Jewish kid telling all these Christian stories. Now, being a countertenor and singing a lot of Handel—Handel has so many great oratorios for which the stories come from the Hebrew Bible, from the Torah and Prophets and all these texts I grew up with. I’m doing Handel’s Saul over the next couple of seasons, and in that, my character is David, from the story of David and Goliath. It’s a real treat for me to play a part in telling these stories that I grew up cherishing.”