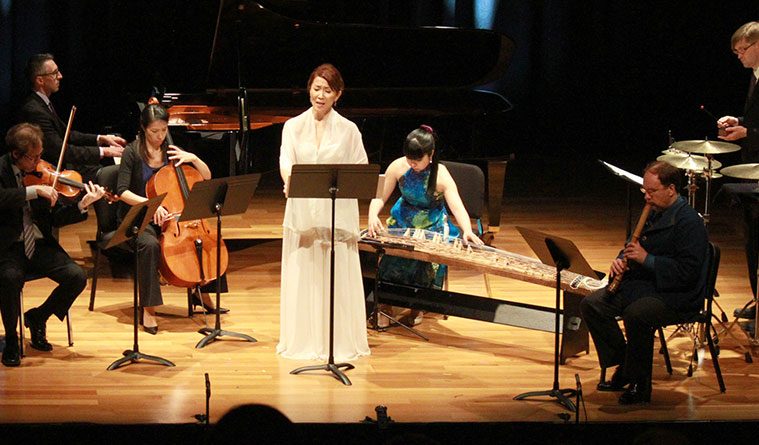 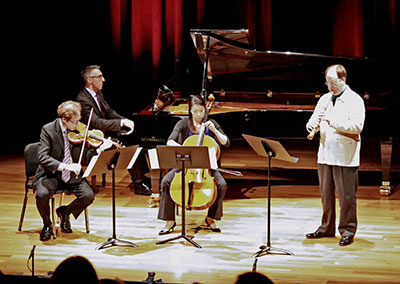 The final weeks of the concert season have brought some massive musical canvases, such as Richard Wagner’s Die Walkuere and Gustav Mahler Symphony No. 3, so Aperio‘s “Silences” program offered a refreshing reminder that vignettes have power, too. Marty Regan‘s chamber works, putting Western and Japanese instruments side-by-side, painted compelling pictures with a few sonic brush-strokes.

Take one of the most limpid works: Frolicking with the Birds, a duo for cello and Japan’s plucked-string koto. Despite coming from different parts of the world, the two instruments joined voices neatly: The koto’s airy, sometimes harp-like tone colors complemented the cello’s fuller sounds, helping the music’s vaulting, sailing lines create their tone painting. The cello’s heft gave the main theme’s upward surge an aura of bursting free of earth’s bounds; from the koto, the same theme seemed aloft from the start.

Asian culture has fascinated Regan, a Texas A&M faculty member, since his youth. As a college student, he majored in music and Asian studies in tandem. Over the past 15 years, he has shuttled across the Pacific studying Japan’s traditional music and instruments, and he has incorporated Japanese influences in more than 60 works. In 2013, Houston Grand Opera’s HGOco subsidiary premiered Regan’s The Memory Stone, a chamber opera whose story unfolds among Houston Japanese-Americans.

Aperio’s May 14 program, presented in tandem with the Asia Society Texas Center, returned Regan and his music to the center’s theater, where The Memory Stone premiered. Though most of the works included Japanese instruments – the recorder-like shakuhachi, plucked-string koto or banjo-like shamisen – the concert’s subtitle, “Japanese Inspiration in the Music of Marty Regan,” only began to suggest the influences at play.

Regan drew on an Arabic scale in Magam, a virtuoso flight for solo shamisen. Splash of Indigo, a string quartet commissioned and performed by the Apollo Chamber Players, in part paid homage to French music, especially in the main theme’s kinship with that of Maurice Ravel’s Quartet. The elegy In Remembrance…looked back at the 9-11 attacks on Regan’s homeland. In Remembrance…, the concert’s opener, combined Western piano trio with shakuhachi, played by Regan. The shakuhachi alone intoned a theme whose simple start, just a couple of downward steps, established the pensive mood immediately; as the solo unfolded from there, free and unhurried, the introspection grew richer.

The strings took up the theme in turn, adding sweetness and gleam, and the piano’s gentle chords supplied a poignant harmonic foundation. Even when In Remembrance…grew agitated, it never veered into histrionics. Regan shaped the shakuhachi solos with conviction, though his playing sometimes sounded labored, while the music gained more of the subtlety it needed from pianist Michael Zuraw, violinist Andres Gonzalez and cellist Shino Hayashi.

Hayashi and Yoko Reikano Kimura, playing the koto, gave buoyancy and brightness to Frolicking with the Birds. The bustling fastpass!, inspired by the sensory overload of Walt Disney World, paired the jangle and breeziness of the shamisen with the thunking accents of two small drums. Kimura and percussionist Craig Hauschildt launched into the music vigorously, yet they also gave the quieter moments a light touch. 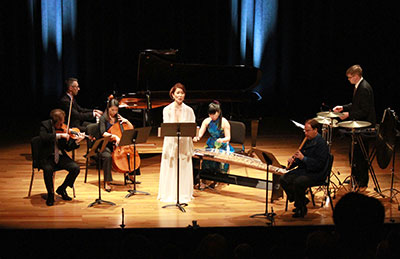 Kimura made the shamisen solo Magam sound like she was improvising it: Whether she was zipping through the energetic sections or tossing off the glissandi that make lyrical phrases sound like they’re floating off into the air, Kimura fit every moment into a natural flow. The Apollo Chamber Players, in a cameo appearance, spun out Splash of Indigo sleekly.

To close the concert, soprano Yuri Maria Saenz joined the non-Apollo musicians in the premiere of Regan’s Silence, an Aperio commission based on a poem by Japan’s Shuntaro Tanikawa. The high, long-breathed soprano part set an ethereal tone that the instrumental group shared. The atmosphere suited the enigmatic poem about trying to share insight that one may not possess, which concludes:

“It is always I who am responsible to talk
about myself, about the world,
knowing that I know nothing.
Not a word, not a voice,
No murmur, no song – not even a cough, yet
I have to talk about everything.”