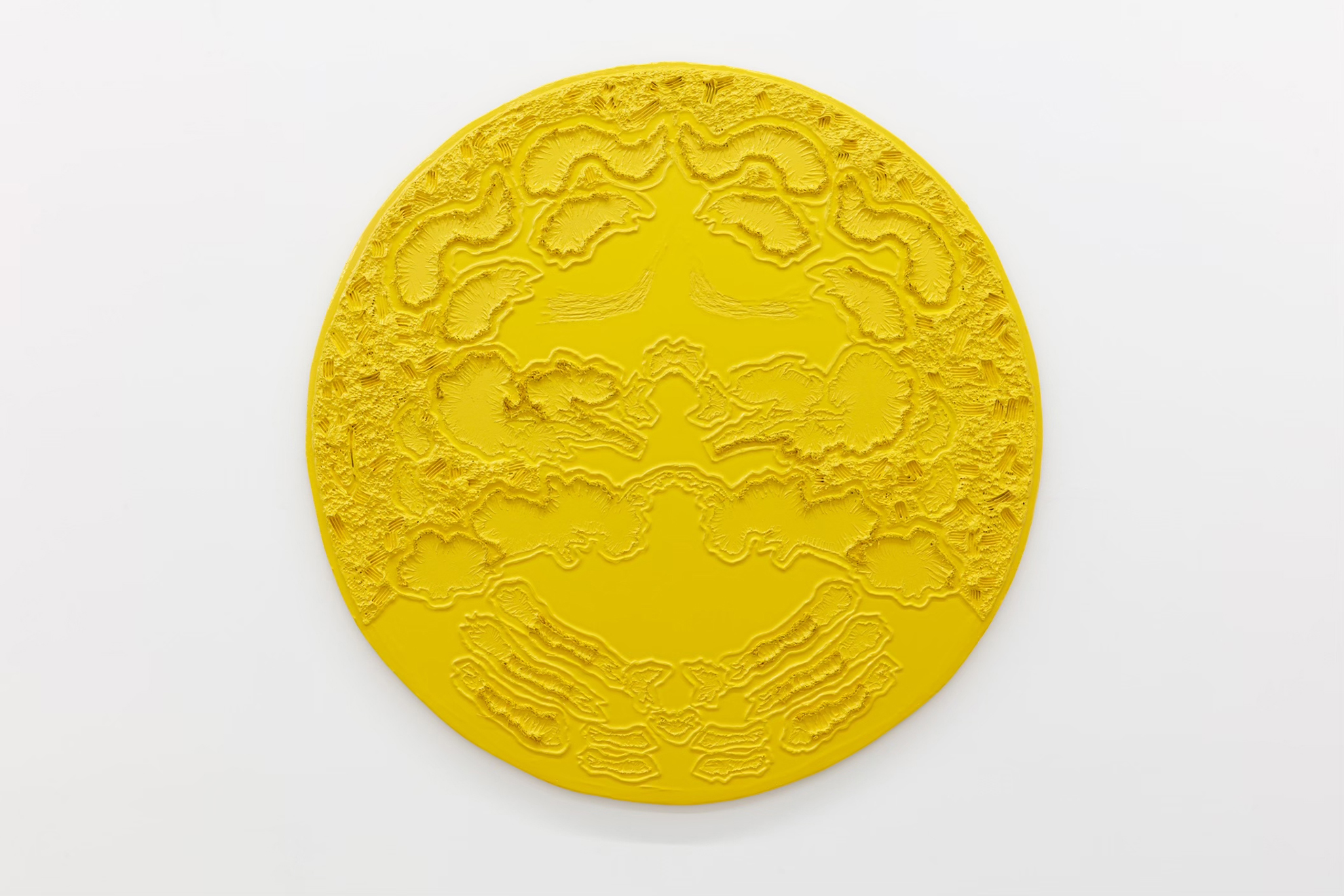 Several brilliant circles, all bright red with the exception of a single yellow tondo, hang on the walls of the lower gallery at the Houston Museum of African American Culture (HMAAC). They surround a playful yet daunting mobile, which hangs above equally antithetical building blocks. From a distance, the tondos of I Drive Thee, 2021–22, entice the viewer, drawing the eyes toward the intricate designs hidden by the monochromatic treatment. Each piece also bears an allusion to the high-performance, insurmountably expensive Lamborghini sports car, an object that has fascinated the artist for years.

Reference to these machines is a common thread across the majority of David-Jeremiah: Early Career Survey, on view at HMAAC through Sept. 10, 2022.

“Ever since I first saw a Lamborghini, it snatched me up,” David-Jeremiah (DJ) said. “In studying them and relating to them, my mind kind of forced me to build off that conceptual throughline.”

As he learned more about these stunning machines, DJ found what many never realize. When the brand stopped naming their models numerically, they began to coin them after Spanish fighting bulls.

“There’s a mixed mythology behind that, whether Ferruccio Lamborghini was obsessed with Spanish bullfighting or some marketing professional chose it,” he continued. “Either way, you have this machine wrapped up in this ritualistic violence, which is akin to the human body in how we’re wrapped up in hurting each other for sport.”

­­­
The artist has entwined this fascination with the Black experience quite seamlessly after spending years reflecting on both, blending the machines with historical and societal references to trauma. Through I Drive Thee, DJ transforms the two animals at odds in bullfighting, the horse and the bull, into twin representations of Black masculinity, parallel perceptions ascribed by the larger society.

“Violence, machismo, bravado, performance all come into play in my practice,” the artist stated, speaking to the bull as the perception of the aggressive black male as the horse counters it with a perception of respectability.

These ideas drape across the surface of each tondo to form diagrammatic depictions of collarbones and orchid blossoms, bringing visual form to the trauma and violence at play in the Black male experience. While these markers are toxic in ways, the artist also views them as an opportunity for people to understand and process the impact of racism on identity. These ideas extend to the mobile and blocks that these tondos surround.

Dubbed Kalder and Khild’s Play, the pieces utilize the symbol of the KKK hood as a tactic to combat the hate internalized in response to hate.

“Kalder is a shoutout to Alexander Calder,” DJ stated, “and it’s dedicated to my son. The concept is about the competition within something negative, and that concept is hate.” 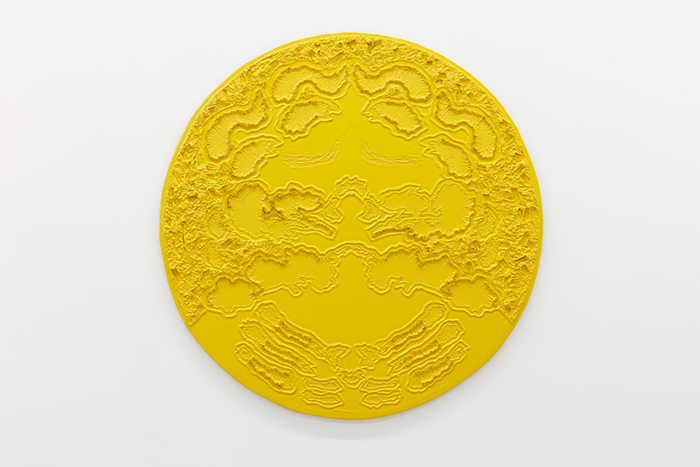 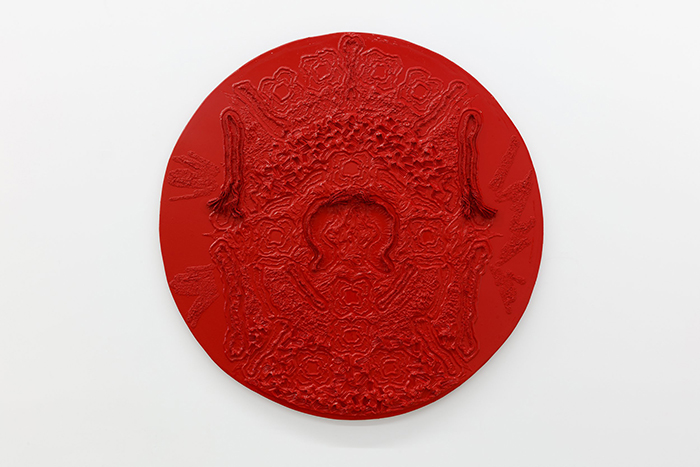 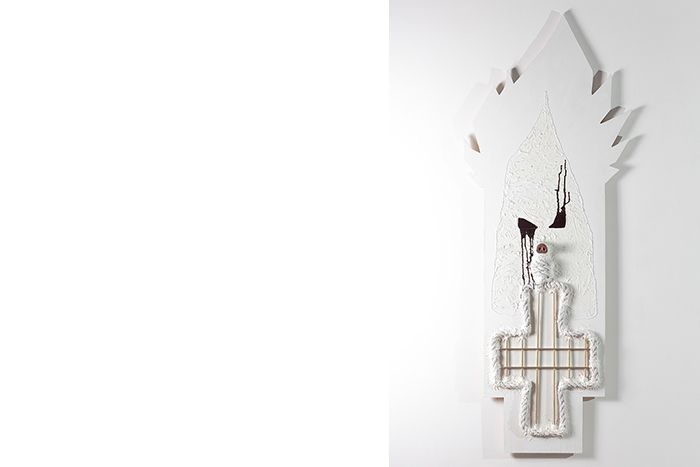 As a father, DJ started to think about the lessons and legacy being passed on to his son.

“Like any good father, you don’t want your son to have to do your job,” he explained. “I’m here to contribute and accomplish, not leave work for him to do, so I want to deepen his understanding of the way he engages with race dynamics.”

Hanging from the mobile, each KKK hood has two sides, one to communicate the terrifying nature and history of the object and one to pacify it through a cutesy representation.

“If you are going to engage in something negative, find a way to do it better, in a way that you see more of them,” he continued. “Go farther into him than he will into you.”

This is the concept he applies to the taboo imagery of the KKK, challenging himself to explore the icons and imagery without treading ground that is more and more familiar within the art world.

“There’s a nobility about the art, and I really believe that it has the ability to, not conclude the conversation, but to take the air out of the bullshit and leave everything on the table, and at least say I tried,” he said.

These challenges and questions drove David-Jeremiah as he fleshed out pieces in detail, writing them down in notebooks during a staycation in prison that prevented him from bringing his visions to fruition. Over the past few years, in the actualization of these pieces, he’s found a sense of affirmation and verification as he redefined himself. 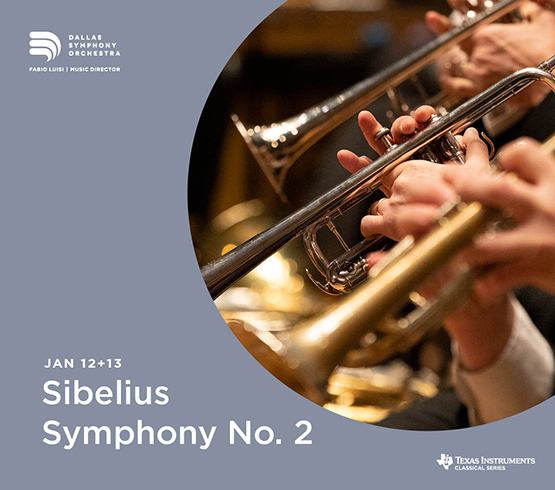 “It was incredibly empowering because I spent more time against myself than I did for myself, but I think that’s natural, especially in the culture I come from, where  adversity has been transformed into a badge of honor at a lower degree,” DJ explained. “In the popular definition of manhood, there’s this idea that you have to go through adversity to live, but in the culture I come from, you go looking for it because you want to belong to the only thing you have—your identity, which is all that black people in the mix of the system have at the end of the day.

Still early in his career, David-Jeremiah is prolific in the execution of his conceptual works, realizing a vision he’s held for himself since childhood.

“Since I was a little kid, I knew that I wanted to be a fine artist,” he added. “I always wanted to be in galleries, bro, chasing mortality through beauty, thought, and aesthetics as they combine.”