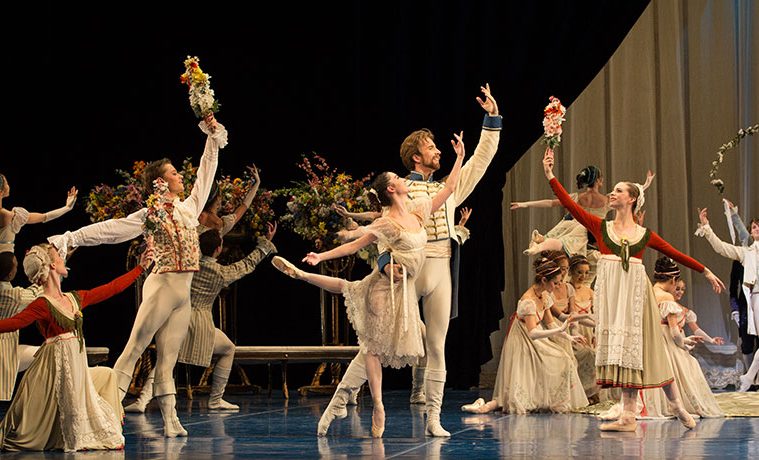 IMAGE ABOVE: Artists of the Houston Ballet in John Neumeier’s A Midsummer Night’s Dream. Photo by Amitava Sarkar. 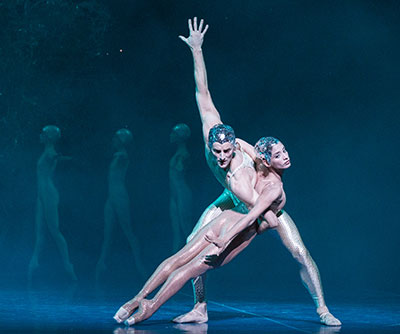 Two smooth bodies, outfitted in glittering unitards, glide through slow-motion partner work in the din of a magical forest, their calculating stares and bitter resentment of each other building. They are Oberon and Titania, King of the Elves and Queen of the Fairies, and they challenge our very notions of reality, both for their convincing portrayals of otherworldly creatures, and their flawless dancing.

Are they real, or are they nothing but a dream?

For the first time, an American dance company is performing John Neumeier’s  A Midsummer Night’s Dream:  Houston Ballet at the Brown Theater through Sept. 14. While the 1977 production (debuted by Germany’s Hamburg Ballet) is one of many ballet versions of Shakespeare’s romping comedy, it’s the best this writer has seen yet, with Houston Ballet’s dancers expertly bringing the story to life. It’s funny, playful and touching, with just that edge of sensitivity.

In Neumeier’s version, everything from the choreography to the music to the design elements contrasts reality with the dream world, dutiful marriage with passionate love, dukes with fairies, and the literal with the figurative. The first of these dichotomies becomes apparent when the Prologue’s court realm gives way (with the dramatic drop of a royal blue curtain) to a misty forest heaving with fairies, who we recognize as such not from literal wings attached to their backs, but from their alien-like, unitard-clad forms. At the same time, Felix Mendelssohn’s classical overture (played live by the Houston Ballet Orchestra) transitions to György Ligeti’s haunting Volumina for organ. In the forest, life tends to move in slow motion — all the better for the fairies meddling in the affairs of four lovers.

One of the highlights at the Sept. 7 matinee performance was Charles-Louis Yoshiyama as the conniving Oberon. It’s easy to see why Puck (Jim Nowakowski) trembles each time the king approaches. Yoshiyama’s unshakable strength, coupled with his menacing deportment, makes him one to fear. Yet there’s something magnetizing about him; we, along with Puck, are lured in. He furnishes a red flower with magical nectar intended for the eyes of Titania (Sara Webb), in order to control her passions. 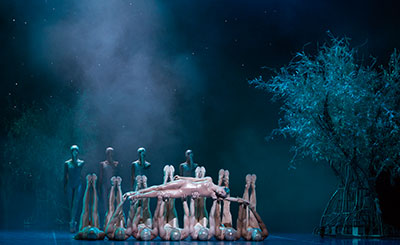 No version of Midsummer would be complete without the band of craftsmen-wannabe-actors. They bumble single file in and out of the forest scene with a street organ that pipes out tinny tunes. Bottom, the weaver (Aaron Robison), tries his darnedest to get the half-witted band organized for presenting the love story of Pyramus and Thisbe to Duke Theseus and Duchess Hippolyta (the royal court versions of fairies Oberon and Titania, played by the same dancers) at their wedding party. Bottom elects Flute, the bellows-mender (Brian Waldrep), to play the role of Thisbe, who wears a dress and Rapunzel-like yarn hair while teetering humorously on red pointe shoes. During the rest of the wedding, the corps de ballet fills the stage with graceful flurries of movement as they dance in cannon.

In the end, all the lovers end up in their appropriate couples — Lysander with Hermia, Demetrius with Helena, Theseus with Hippolyta, and Oberon and Titania. Yet that powerful image of the ruby-red flower is burned into our minds.

For all its lightheartedness, Neumeier’s A Midsummer Night’s Dream reminds us love is cruel, too.