REVIEW: Nicolas Moufarrege at the CAMH 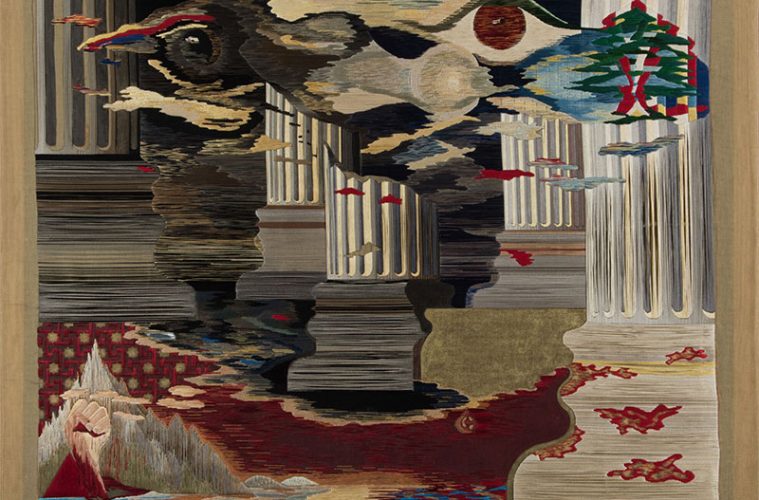 “Younger artists today are inspired by artwork and activist models created by these people in the eighties – a time we can still see as aesthetically exciting and expansive – but because so many of these folks are no longer with us, the history can easily get lost. It’s silenced.”

The story of Nicolas Moufarrege is a sad one. Lost to the AIDS crisis in New York City at the age of 36, the artist had only been in practice for a decade and undoubtedly had much left to produce. Curated by Dean Daderko and on view at the Contemporary Arts Museum Houston through Feb. 17, 2019, Nicolas Moufarrege: Recognize My Sign is the first solo museum exhibition for Moufarrege. 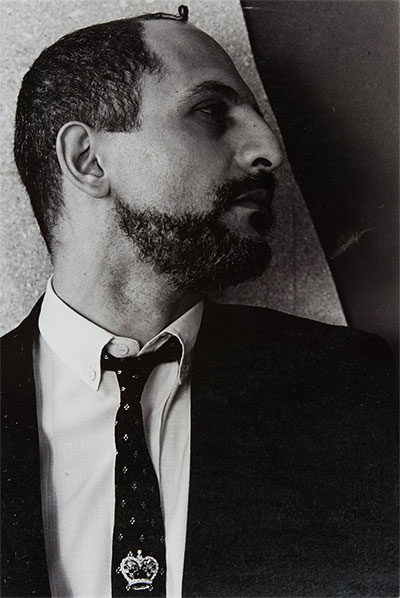 Photograph of the artist, date unknown.

The earliest works in the exhibition are a series of embroidered tapestries. These works, produced in the mid-seventies, are by far the most regal on display, each consisting of multiple forms that blend together into surreal landscapes. In Le sang du phénix, a series of columns jut from pedestals sat in the background. Before them a phoenix appears partially decimated. Blood is scattered across several pillars, pooling at the bottom of the tapestry and revealing some far-off island. Le chemin and No. 7 are similarly surreal while vastly more geometric. They, too, construct strange landscapes, with No. 7 also featuring a mountainous island in the bottom left. The style of these works, though, is quite different. They are not so vibrant as the scene of the phoenix and the imagination behind them has a darker turn.

The works continue chronologically as the exhibition follows Moufarrege to Paris, France in the late seventies. The darker, more surreal backdrops begin to phase out in favor of more vibrant, fantastical landscapes of open seas and skies, all watched over by hulking male figures who gaze upon them, bodies contorted. The landscapes stretch out into familiar geometry, now pulled from tiles and textiles commonly seen in Islamic and Japanese materials. Here Moufarrege begins to more clearly toy with appropriation, picking figures and traditions out of the ether and placing them within his works. 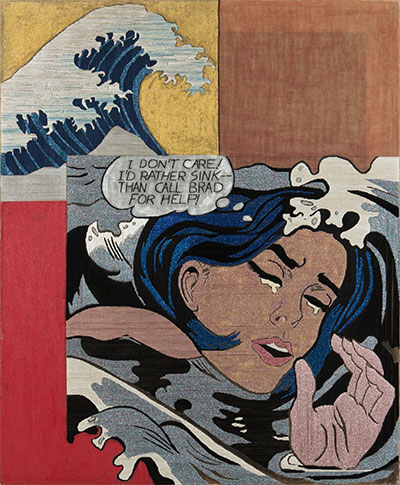 Touted as a “dedicated appropriator,” the artist’s 1981 move to New York City seemingly shifted his knack for pulling from other stories, mythos, and media into high gear. Some common, others more obscure, the references range from Spider-Man to Santa Claus (or Saint Nicholas, depending on the representation). A group of works created in 1983, all stretched horizontal to span across walls and share their tales, show the artist’s affinity for these characters as they appear repeated throughout alongside cyborgs, Arabic script, and those same fantastical landscapes, now a bit grittier and more refined. Narcissix of One and Nick’s of the Other is aglow with glitter that sets the stage for an odd improvisation between scenes of Spider-Man lost in a mirror maze while Lady Liberty watches two gladiators wrestler. The affection for geometric shapes is still evident in these works, but they seem to have taken a back seat to his hurried attempts to include a multitude of references via these characters. 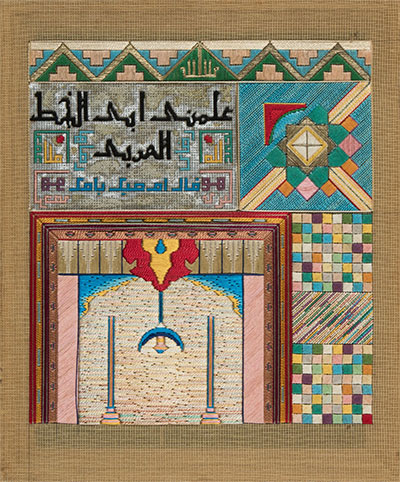 The exhibition closes with artwork created in Moufarrege’s last year of life. When he became sick, the disease took him fairly swiftly, but he managed to eke out his appropriative visions in a simple yet layered fashion. Arranging appropriated works from the likes of Lichtenstein and Hokusai, the artist effortlessly and quite simply stacks painting over painting to produce something entirely new, drawing them together through shared reference and connecting them in a lovely way. While Moufarrege’s career as an artist was quite brief and while he may have had much yet to make, he is not quite so silenced.