In the three years that SAGE Studio has showcased artists with disabilities—helping its roster develop and sell their works, much as ordinary galleries do—Austin’s art scene has embraced it, co-founder Lucy Gross says. When she declares, “Our community is so welcoming,” her voice exudes gratitude. Nevertheless, she senses a boundary between SAGE Studio’s artists and the broader scene. Thanks to her decade-plus of working in disability services, Gross can see that the divide mirrors one outside the art world.

“Our society is not really set up to be super-integrated,” Gross says. Schools put people with disabilities in separate classrooms, she notes, and in places that employ them, they’re often set up in areas apart from others. Through SAGE Studio, she and co-founder Katie Stahl hope to tear down a piece of the wall: “to create a space where contemporary artists with disabilities were part of the community,” she says. They’re moving further down that line with “Tandem: A Collaborative Show.”

“Tandem,” running through Aug. 29 at Martha’s Contemporary, spotlights 11 pairs of artists. Each duo includes one from SAGE Studio’s roster and one from the ranks of professional artists who don’t have disabilities, and the show reveals the artistic conversations that bubbled up after SAGE Studio put them together.

“Austin has this really vibrant, wonderful arts scene, but artists with disabilities are often separated from that,” Gross says. “This was an opportunity to get all these artists together in one space—in one show.”

­­­
“Tandem” puts Charlie French, a SAGE Studio artist who lives in Dallas, alongside Austin artist Will Bryant. Stahl and Gross matched them up because “they both have such an intuitive sense of color,” Gross says. Bryant’s “Untitled” is a feast of abstract shapes, whereas French’s “Escape to the Ocean” offers a more recognizable scene. But the paintings harmonize in their luminous shades of blue, pink and orange.

“Will’s piece feels like a party to me—it feels like a confetti explosion. Charlie’s work is more serene,” Gross says. Then she indulges a bit of whimsy: French’s painting “makes me think of lying on a beach. Will’s piece is the fruity drink I would be drinking.”

How did the show’s artistic pairings come about? Even before the two women founded SAGE Studio, Gross says, she and Stahl spent years attending shows around Austin and following favorite artists on Instagram. When they began planning “Tandem,” they drew up a wish list of artists who had subject matter, materials or techniques in common with artists from SAGE Studio.

“Once we had this dream roster of Austin artists,” Gross recalls, “it was really just a cold call (process) of emailing and sending Instagram messages—pitching this project and asking if they would be interested. I think everyone we reached out to agreed to participate. They were so excited and open about it, really willing to try something new.”

“We weren’t looking for the guest artist to mentor them or to create a piece for the artist with a disability,” Gross emphasizes, but “to look at them as equal partners. I think everyone really respected that.” 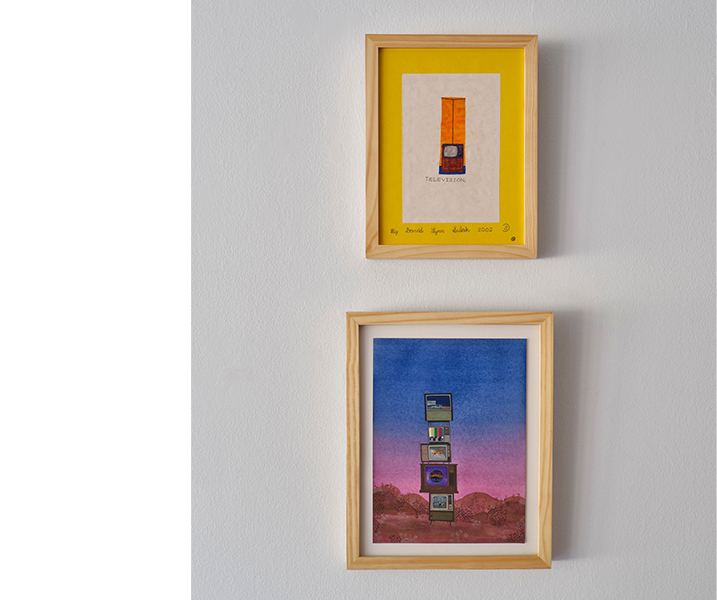 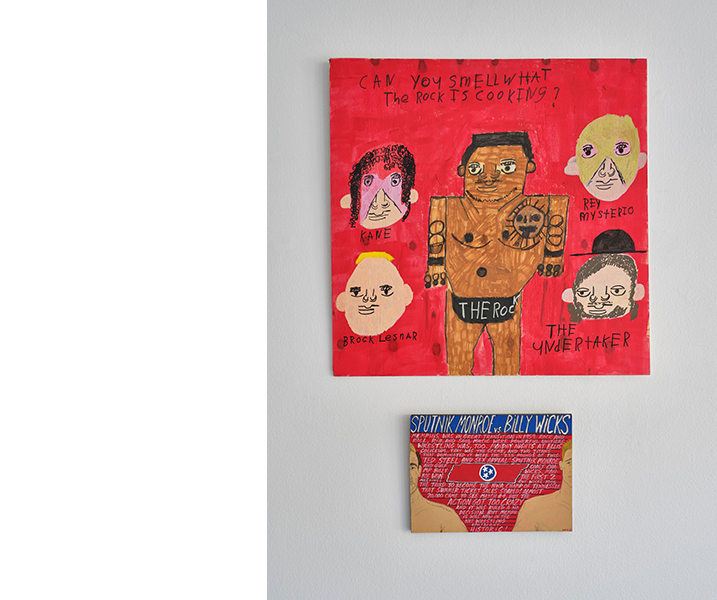 Rick Fleming, Can You Smell What The Rock is Cooking (top),  Will Johnson, Sputnik Monroe vs. Billy Wicks (bottom). Photo by Andrea Calo. 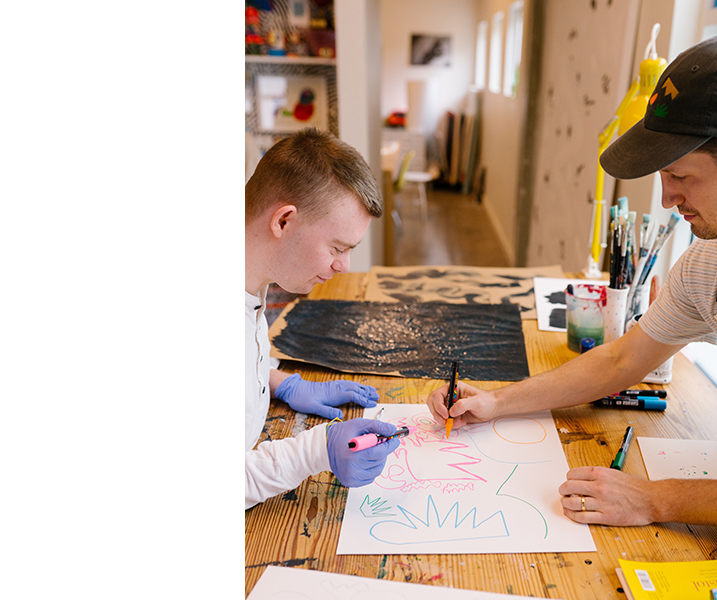 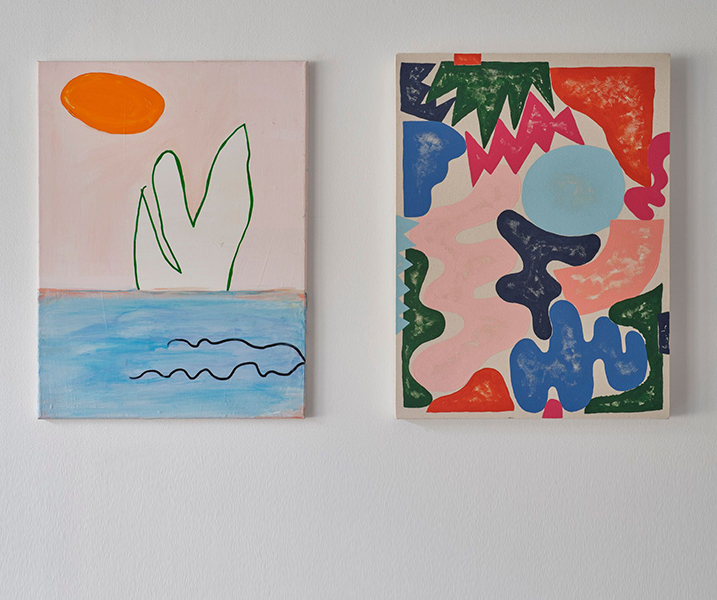 Charlie French, Escape to the Ocean (left), Will Bryant  Untitled (right). Photo by Andrea Calo.
She recalls when French visited Bryant in his Austin studio. “They did these exercises, kind of like tic tac toe,” Gross says. “One would do a brush stroke or a line, and the other would respond. That was just a get-to-know-you exercise, not something that ended up in the show. It was really cool to watch.”

Webb Gallery artist Ike Morgan, took up painting at Austin State Hospital but now works at his home, likes to paint portraits of presidents. So he’s represented by “George Washington,” and his partner—guest artist Tim Kerr—has picked up on the portraiture theme. His work depicts none other than Ike Morgan.

“Tim said, ‘Ike paints portraits of famous people, and I think Ike is a famous person,’” Gross says. She notes that “both their works are raw and gestural.”

Subject matter links SAGE Studio’s Sam Eiler and guest Mike Combs. Gross and Stahl paired them up because “Mike has these kind of fantastic, demented Disney-themes pieces, and Sam has a lot of Disney imagery in his pieces,” Gross says. The outcome: Eiler’s “Walt Disney,” a 21-inch-tall puppet, stands next to two collages by Combs, who includes Pinocchio among the imagery.

“Even though they are working in very different mediums, they have these really smart nods to one another,” Gross says. “I really love that.”

“Tandem” was originally scheduled for April 2020, Gross says, but covid-19 put a stop to that. Now it’s SAGE Studio’s first in-person exhibition since the shutdown. During the time that Gross and Stahl couldn’t meet with their artists in person, they did so over Zoom, and SAGE Studio presented two shows online. The pandemic months even brought some opportunities.

Vans Shoes mounted a project called Foot the Bill to help small businesses survive the pandemic, Gross recalls, and the company picked a design by SAGE Studio’s French to go on special-edition shoes and t-shirts. They generated a welcome contribution to the studio’s coffers. After the studio launched a commissioning program, artist Rick Fleming was enlisted to put Joe Biden’s image on a tote bag—and  news of it worked its way to Biden’s campaign, which hired Fleming to design another tote for its web store. Not only did Biden’s supporters buy about 3,000 of them, but Fleming received a Zoom call with Biden himself.

“It was hard to be away from our artists. It was hard to not be able to see our friends at shows,” Gross says. “But some really lovely things came out of the shutdown as well.”