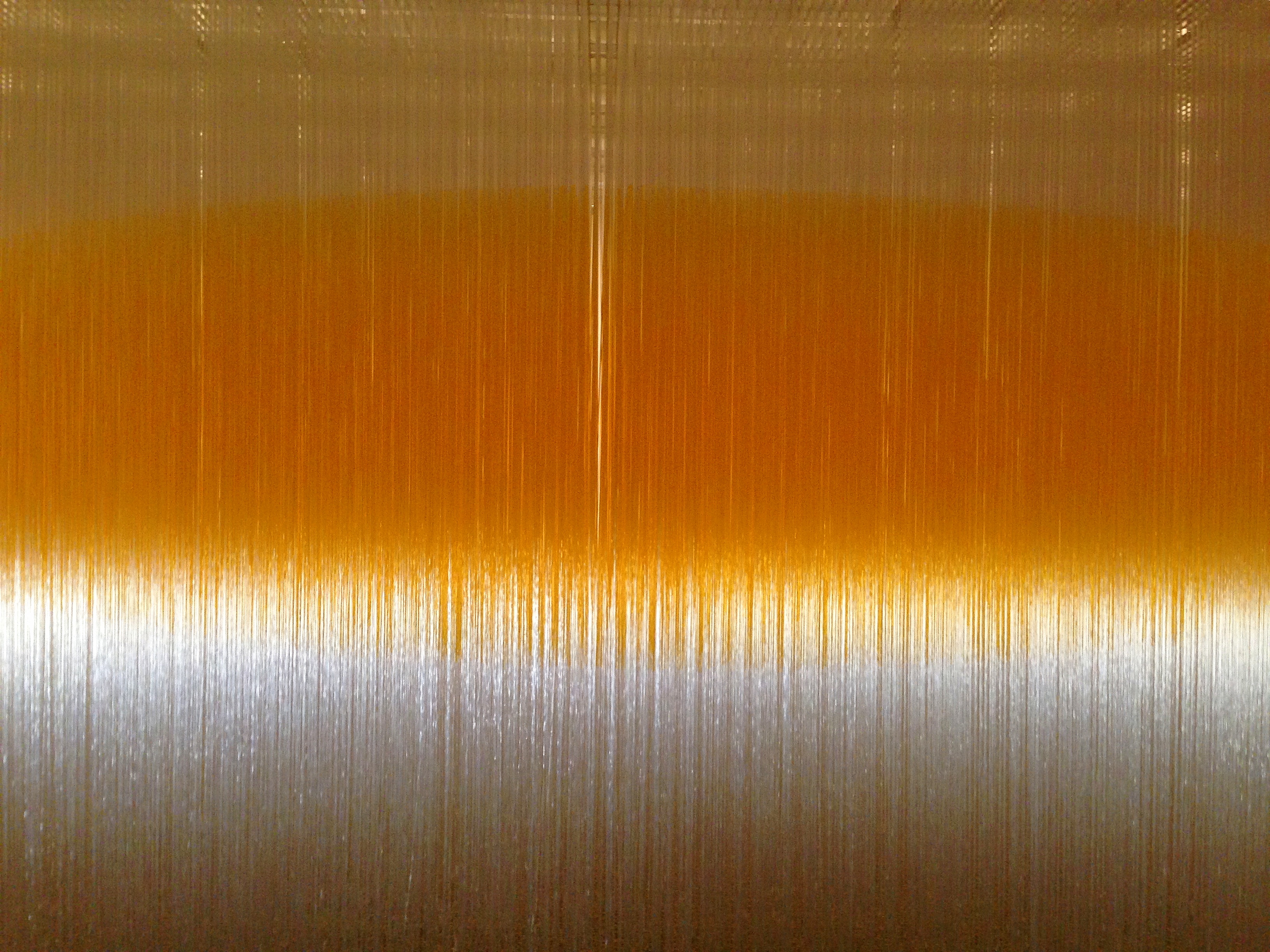 Jesús Rafael Soto and ‘The Will to Architecture’ 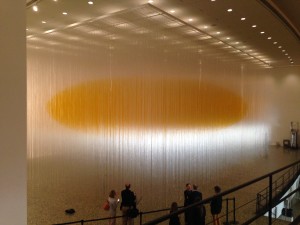 More and more museums have loosened up their photography policies, a fact that can sometimes feel like a mixed blessing. I remember visiting the Crystal Bridges Museum of American Art the day it unveiled its new Rothko acquisition and thinking how his stomach would have turned at the sight of visitors snapping selfies in front of it. And an integral part of the Museum of Modern Art experience is dodging tourists as they leap in front of you to snapshoot this or that Pollock, then dash off to document the next one without so much as pausing to look at either. Still, I believe most museum snapshooting, particularly in the age of social media, is done in a spirit museums ought to encourage–that of sharing enthusiasm for an artwork and, perhaps, for its home. 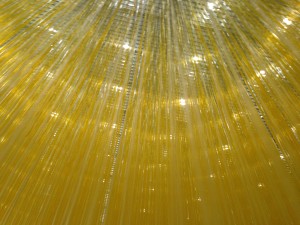 In the case of the late Jesús Rafael Soto’s posthumously realized Houston Penetrable (2004-2014), which goes on public view Thursday in the Museum of Fine Arts, Houston’s Cullinan Hall, taking and sharing photographs strikes me as an important part of the overall experience of the work, which the MFAH says is one of very few site-specific Penetrables–immersive environments meant to be completed by viewers’ ever-shifting perceptions of light, movement, and space–Soto designed and the only one intended for permanent or semipermanent interior display.

The Houston Penetrable consists of 24,000 polyvinyl chloride (PVC) tubes hanging 28 feet from the ceiling to the floor. The transparent tubes have been individually hand-painted to create a yellow elliptical volume that hovers in the environment’s 2,600 square feet. By filling the space with all those tubes, Soto meant to call viewers’ attention to space as an autonomous element to be experienced with multiple senses, so it’s essential, of course, to penetrate the Penetrable–to wade right in and push through its sea of tubing and feel it thwack all over your body. 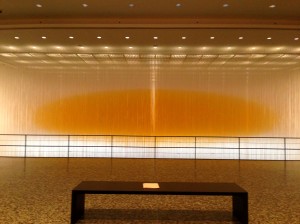 But penetration isn’t everything. It’s also essential to walk around the Penetrable in Cullinan Hall, which Ludwig Mies van der Rohe designed in 1958, and to walk upstairs to the Upper Brown Pavilion, which Mies also designed and which opened in 1974. Viewed from Upper Brown, the Penetrable’s funhouse charms give way to a much more contemplative mood.

As with architecture, the more vantage points from which you experience the Houston Penetrable, the better, so it’s fitting that eventually Soto calls your attention as much to the building it was designed for–conceptually by Soto, then practically by the six entities who made its realization possible: Balfour Beatty Construction (the general contractor for ceiling work in Cullinan Hall); Berger Iron Works (construction and installation of aluminum supports and grids); Bury CHPA (consulting engineers); Cardno Haynes Whaley (consulting structural engineers); David R. David of Warehouse Associates Development (which provided the warehouse space for installation testing); and Kendall/Heaton Architects (consulting architects). (With Soto’s Penetrables system, the idea may be what Sol LeWitt called “a machine that makes the art,” but not without the heroic efforts of architects and engineers.)

For just as, at one point, you look down at the Penetrable from Upper Brown, at other points you look back at Upper Brown, where fan-shaped walls now echo that of the curtain wall facing the street, either from within the Penetrable or from somewhere along its periphery. You look out into the north foyer, where poorly placed ticket counters once wasted potential exhibition space, into an installation of Soto works in Houston collections. Art now immediately greets visitors who enter the MFAH through the Law Building. The Cullinan Hall ceiling renovations necessitated by the Penetrable‘s seven-ton grid and the eight tons of steel needed to support it have dovetailed beautifully with director Gary Tinterow’s enhancements to the Mies additions, the rejuvenation of which has to be one of the most significant early accomplishments of Tinterow’s MFAH tenure. (Even little gestures like removing the signage from behind the Alexander Calder sculpture out front have reinforced the Law Building’s art-driven sense of purpose.) 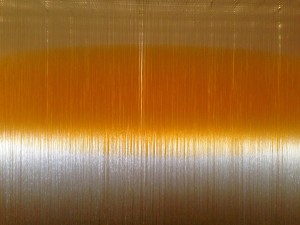 Because the Houston Penetrable not only responds to its surrounding architecture but itself functions at the scale of architecture–Soto had to redesign it for the massive Cullinan Hall after realizing his first draft was too big for the sculpture garden–it lends itself to photography as much as other, more conventional built environments do. What MFAH assistant curator Yasufumi Nakamori has described as “the magic that photography (can) render”–it can “focus on details, deconstruct, fragment, and reconstruct an architectural structure and, through selection, cropping, and sequencing, (can) present a specific image of a building”–applies equally to the magic photographs can make of Soto’s monumental Houston Penetrable. Seeing it in photographs is no substitute for navigating it in person, but the converse is also true. At the press preview, people who had just walked through and around the Penetrable were oohing and aahing over my iPhone snapshots of it as if they hadn’t yet seen the structure itself. (They had, of course–just in a different way.) All of which is a long-winded way of saying I’m glad the MFAH is encouraging visitors to take pictures of the Penetrable. It’s not just a smart thing to do, like letting guests snapshoot a jpeg of a Rembrandt for their Facebook pages (free marketing!); it’s a way of enabling an important mode of experiencing Soto’s environment.

Whether by lucky or deliberate coincidence, Nakamori has a small show in Lower Brown called The Will to Architecture about “the desires of artists to investigate the architectonics of space through photography.” 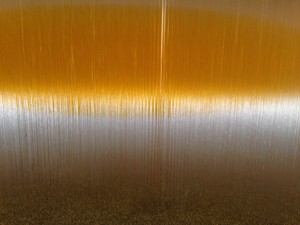 “The photographs in the exhibition are not ‘architectural photographs’–photographs of beautifully lit buildings that are often commisioned by an owner or an architect,” Nakamori writes. “Instead, these images show how artists have used photography intellectually and metaphysically to project their complex concepts into spaces both specific and universal.”

Including images of actual buildings as well as ephemeral and imaginary spaces, The Will to Architecture makes a surprisingly ideal companion to the Soto show, while suggesting an apt alternate title for the Houston Penetrable. Ironically, when I tried to take some snapshots of Nakamori’s collection-based exhibit to share with my Facebook followers, a guard said no photography was allowed.