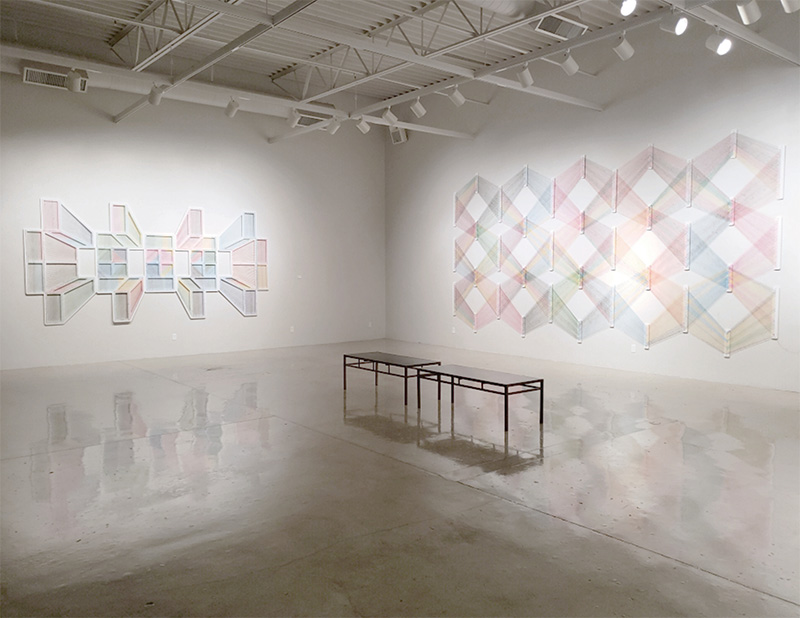 Installation view, Adrian Esparza, I-10 at the University of Arizona.
Photo courtesy of the artist and Cris Worley Fine Arts.

“There are associations that come with the use of a sarape, especially now with recent political and economic border issues,” says Adrian Esparza, referring to the brightly colored, blanket-like shawls from Latin America that inform and compose much of his work as well as the constant issue of the Mexican-American border, in which Texas is often found at the center. “I welcome any interpretation, but creating a new realm with the work is a goal of mine.”

Currently, Esparza is working on a new body of work on view at Cris Worley Fine Arts from March 30-May 4 in the exhibition Dual, referencing the visual aspect of duality within the works and inviting a variety of associations, from Esparza’s duality as a Mexican-American individual living along the border to the transformation of the sarape from a cultural icon to something utterly new.

Esparza grew up in El Paso in the 70s when craft and art were integrated into everyday life. “Pattern and color were everywhere,” he recalled, “and macramé was the thing during that time, too.” Color, pattern, and fabric would heavily inform his work later on as he dismantled sarapes and use the yarn to create geometric patterns that toy with dimension and perspective, sometimes referencing the patterns used in the sarapes themselves but drawing influences from an array of sources.

“My grandmother and mother sewed a lot, so witnessing the fabric become something was definitely influential,” Esparza said, reflecting on the origins of his practice. He added that his uncle built and repaired guitars, saying “the manipulation of wood into a pristine object continues to inspire my forms.” Fabric and wood now intermingle in his work as the base components of each piece.

Drawing has always been a part of Esparza’s life, and he soon realized art was as well. After pursuing a BFA in Painting in his hometown at the University of Texas at El Paso, he moved to California for graduate school at CalArts, “where all of my previous artistic knowledge would be questioned.” He recalled preparing for his thesis show and being shocked that all his newly acquired knowledge failed to produce even a single object.

“In frustration, I looked down at my bed,” he remembered, “and the sarape that I had brought to California for warmth reminded me of the Modernist paintings that inspired hours of discussion at CalArts.” He pulled from his own sentimental memories of the sarape as well as its cultural significance and symbolism and began to simplify and examine the object. “The signifier and deconstruction were applied literally, so I took it apart to display it as a flag, fence or even an abstract self-portrait.”

Each design starts with a drawing on grid paper, marked up with a fine tip marker and a whiteout pen, to establish the layout of the wood and the overall form that the yarn would take. While he would once cut simple designs himself with a router, the artist now works with a local business called FabLab who transform his drawings into precise structures that are ready for nails, paint, and yarn.

“The work continues to develop,” he said. “I have always explored different approaches to my creativity, but this one spoke to people. The process and presentation remain, but the forms continue to evolve, and I suppose they are endless.” All of his materials bear their own limitations and rules, but Esparza utilizes simple geometric forms and builds them out into complicated combinations, some contained within smaller frames while others explode across walls.

“Perspective is a continuation of instilled geometry,” Esparza said, referring to the grid-like pattern that the pieces grow from. “I taught Art Appreciation and foundational art classes for 15 years at the university level, so perspective was just waiting to be utilized in my work. The Southwest landscape is a constant reminder of this discovery.” The deconstruction of the sarape and Esparza’s recontextualization and restructuring of the material into these installations speaks to a culture unique to the experiences of Mexican-Americans in border towns. He sometimes refers to his works as abstract self-portraits, exploring his own cultural identity through this iconic and traditional fabric craft.

“Whether it is in art, technology, nature, or an individual,” Esparza stated, “evolution and transformation are inspirational notions for me.” Esparza’s work bears within it a surreal and political core that leaves viewers amidst a landscape open to multiple interpretations—“a neutralized experience that is sometimes experienced just before waking up.”