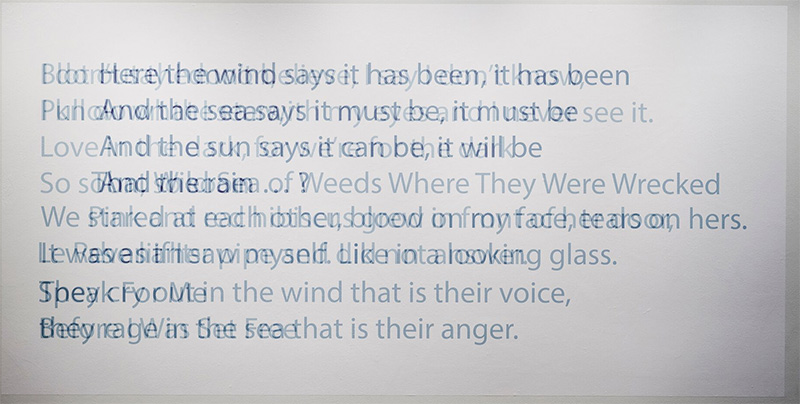 Regina Agu sits, poker straight, on the lumpy coffee shop couch where we meet to discuss her current projects. She is soft-spoken but purposeful in describing her work, and her gentle clarity seems in contrast to the busy, involved practice she is describing. Recent projects include a photo installation at Project Row Houses back in January, her ongoing collaboratively run space-Alabama Song, an auction/performance called House of Wahala with events at Women & Their Work in Austin and DiverseWorks in Houston, a three-person show Into the Midst of Things at DiverseWorks through July 22, and a two-year remote residency with the Drawing Center in New York. “I’ve always had to balance something outside of the studio,” she acknowledges. As an artist, constant collaborator, and grants writer with a seemingly inexhaustible curiosity, Agu finds the studio to be “a release.”

A pragmatist, the artist folds her studio work and research into the daily grind. “I take notes all day. I always have multiple notes and voice memos.” It is not surprising that the focus of her work has turned to the busy and continually shifting landscapes of Houston, which she laughs is “would-be swampland.” A longtime maker of works on paper, Agu has turned her focus to documenting and recontextualizing her environment. “Lately, photography has taken up a large part of my process, it’s been increasing over the past couple of years,” she says.

For Sea Change, her installation at Project Row Houses, she wrapped a gigantic panoramic photo of artificial dunes created in Galveston. The beach scene was a response to the invasive, red seaweed epidemic of 2014, which struck not only the Texas coast but coasts in Western Africa and the Caribbean. “I’m looking at public space and landscape. I’m taking up landscape photography, particularly as it’s related to communities of color.” Agu was interested in the multiple layers of this crisis. The stinking, rotting seaweed was both an arbiter of climate change and revealed inequities at multiple levels in these various countries. The Galveston dunes represented a certain economically privileged position. “We have infrastructure to deal with it,” she shrugs.

While tackling the serious and dire issues of public space, “from public parks to privately run prisons,” Agu maintains a sense of humor and a humbleness that is endearing. Friends of Angela Davis Park was a project for which the artist (in collaboration with Gabriel Martinez) was awarded an Idea Fund grant in 2014. Like any spare patch of earth in our fair city, “the park was slated for development,” Agu explains. The artists took it over in a guerrilla intervention, rechristened the space in honor of famed political activist Angela Davis, and hosted “picnics, poetry readings, and presented original literature.” The joyful but unsanctioned intervention has come to a close as construction has commenced on the site, but Agu hopes to resurrect it as a “roving space.” I asked her if the park’s namesake knows of it’s existence, and for the first time Agu blushes a little. “I don’t think she does,” she smiles.

Collaboration seems to be a natural modus operandi for Agu, who also includes hosting reading groups as a major part of her process. One, for example, was a reading group for women of color to discuss feminist texts. She explains, “I don’t have a typical art background. A lot of my own education in art, especially theory, comes from [this kind of] alternative pedagogy.” Educated at Cornell University with a degree in Policy Analysis and Management, Agu came to art in a circuitous manner.

This is the most refreshing and possibly avant-garde aspect of her work: a receptiveness to the ideas of others. House of Wahala (organized by artist Wura-Natasha Ogunji), for example, includes eight-plus artists in its Houston iteration. In what seems to be one of the larger contrasts amongst the arts (film-making, dance, even writing), many visual artists jealously guard their ability to direct the artmaking process. Even if their research involves a lot of outward engagement, artists often view the making itself as a solitary activity. But almost every project Agu mentions involves at least one other voice, if not a chorus. “It’s a lineage of art-making that I’m really interested in being a part of.”