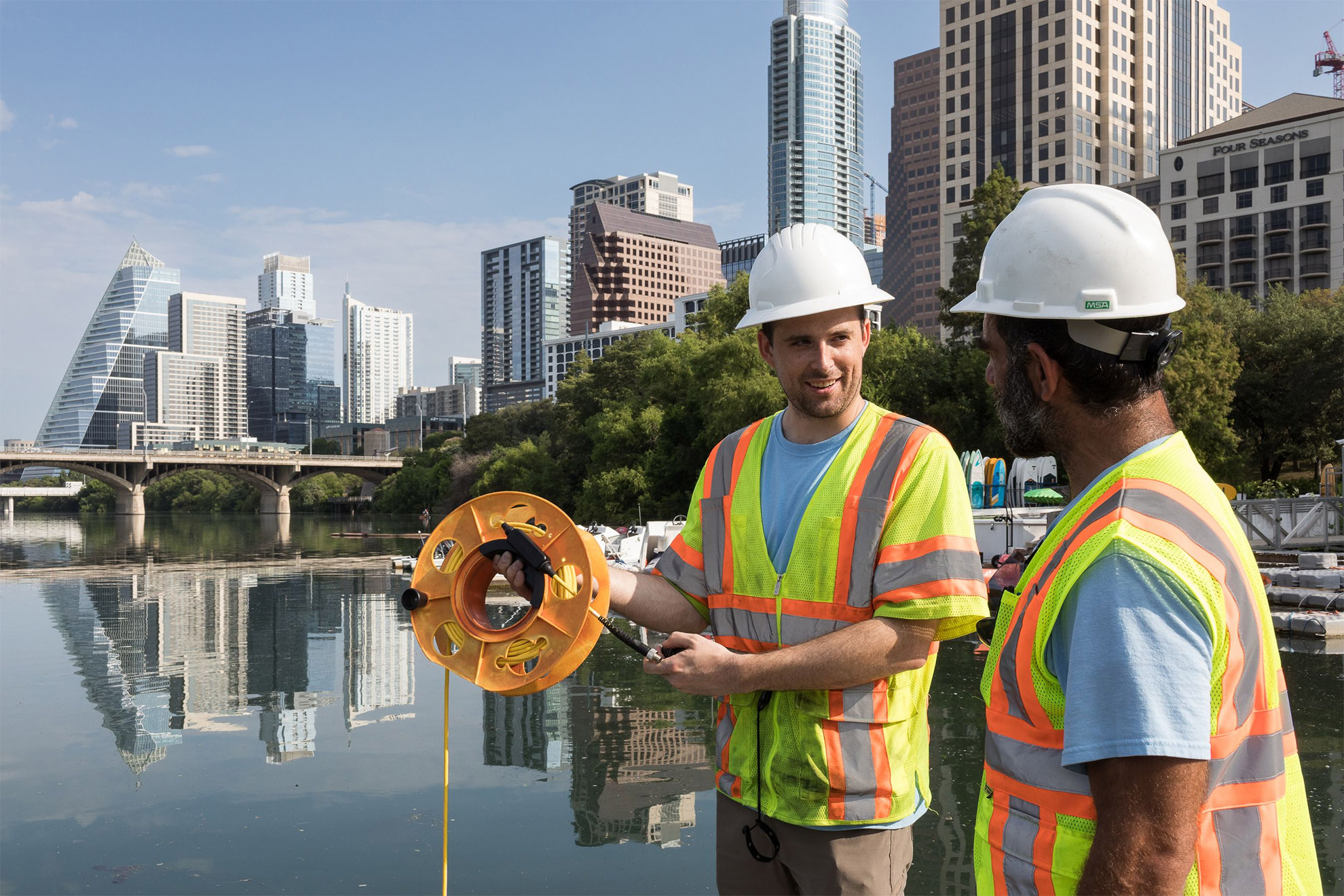 The Way of Water: Forklift Danceworks to premiere new production

You know the saying: When it rains, it pours. Here’s the rest of that saying for Texans: When it pours, it floods.

With a hot and dry summer this year, flooding may be far from most of our thoughts, but it’s never far from the minds of the employees of the City of Austin Watershed Protection Department who work to keep the downtown Waller Creek area from flooding.

While there was little rainfall over the summer in central Texas, money flowed from the National Endowment for the Arts (NEA) to 51 national awardees, including  Austin’s venerable Forklift Danceworks, in the form of Our Town grants. The $125,000 Our Town grant, with an additional $20,000 from the NEA have made possible Forklift’s newest site-specific production, The Way of Water: Waller Creek. The free show runs Nov. 17-19.

The production will take place at Waterloo Greenway near 12th and Red River Streets in downtown Austin. Audiences will experience the daily rhythm of the scientists, engineers and creek-crew workers who maintain Waller Creek. The water-intake facility, dramatically lit by lighting designer Stephen Pruitt, and original, live music by composer Graham Reynolds, will provide the visual and auditory backdrop for the show.

Directed by Krissie Marty, The Way of Water marks Forklift’s seventh collaboration with a City of Austin department and is the second Forklift series to focus thematically on water. This new project will ultimately be a multi-year collaboration, and follows My Park, My Pool, My City, a three-year series of performances that took place at several community pools in collaboration with the Parks and Recreation Department’s Aquatics Division.

“My dad was a marching band director. Me, my mom and my aunt were all baton twirlers, majorettes. Friday night spectacle was part of our aesthetic,” said Marty

Marty and Forklift were a match made in heaven. Forklift’s projects are large-scale, community-oriented, and most often take place in Texas. Marty, a Texas native, met Orr when she returned to her home state from Washington, D.C. where she’d been with the Liz Lerman Dance Exchange.

After conceiving and co-directing My Park, My Pool, My City with Orr from 2017 to 2019, Marty was ready to dive deeper.

“How does water move, and who is watching that movement? Who is managing and protecting that? It’s fascinating for me to look at this as a choreographer…Water is a great connector, and the watershed touches so much in our city,” she said. 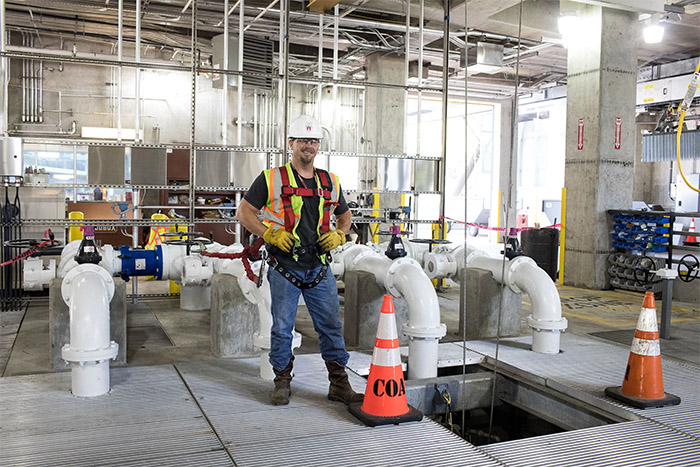 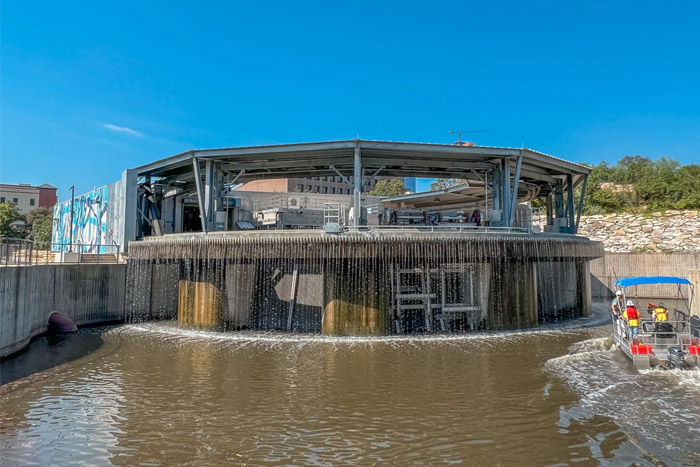 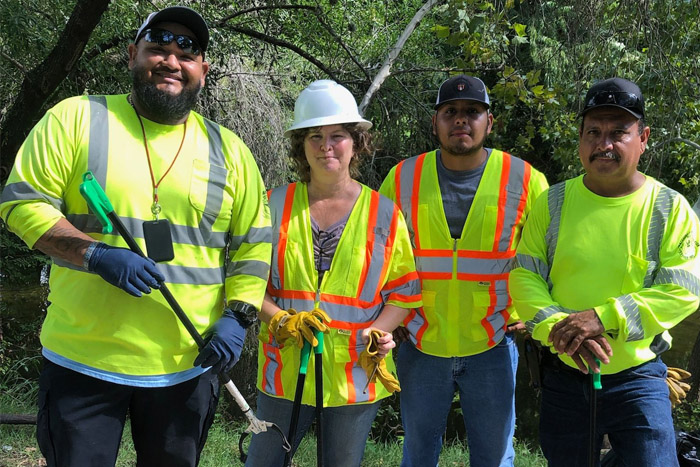 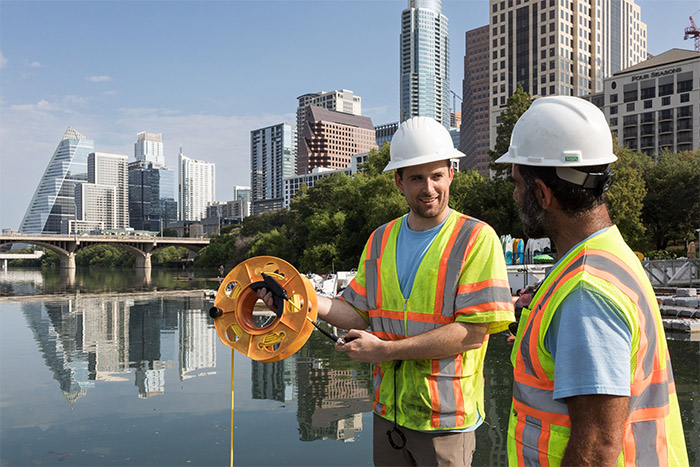 The physical movement of The Way of Water: Waller Creek sprung to life in true Forklift Danceworks fashion—by doing the work alongside the experts themselves.

“We just showed up with the workers and tried to do the work as much as possible to see where there was movement material, to see where the movement vocabulary was. I get that physical information when I get to work alongside a crew. It changes your understanding of the job. I’ll see a sequence of events that are the job, and I’ll say, ‘Ok, we’re going to do that sequence of movement,’ but instead of it taking three hours like it would on the job, we’re going to take three minutes.”

Ultimately, Marty gets most excited when the employees begin to pitch their own ideas for the show. The workers’ input on this project in particular was crucial because, due to the summer drought, Marty didn’t get to experience how the water-intake facility operates during times of rain until late in the summer. She initially spent most of her time shadowing the creek crew, which helps clean the facility and the creek to Town Lake; the lake crew, which cleans trash and runoff; and the scientists who perform water sampling.

The next challenge came when Marty decided the water-intake facility itself would serve as backdrop for the show: Rocks, water, tunnels, concrete, steel—different textures, spread over a large area, that all needed to be expertly lit for the production. There’s a reason why Forklift has long worked with master lighting designer Stephen Pruitt. Another of Forklift’s longest-running collaborators is  Composer Graham Reynolds, who took inspiration from water as a force of nature—at times refreshing and idyllic, at others intense and destructive—to direct a string quartet.

In the weeks and days leading up to a Forklift production, there are many people and logistics to coordinate. It can be difficult, said Marty, to fully grasp the scope until the first full run-through. Said Marty with a laugh, “I’m excited to see the show, too, along with everyone else.”