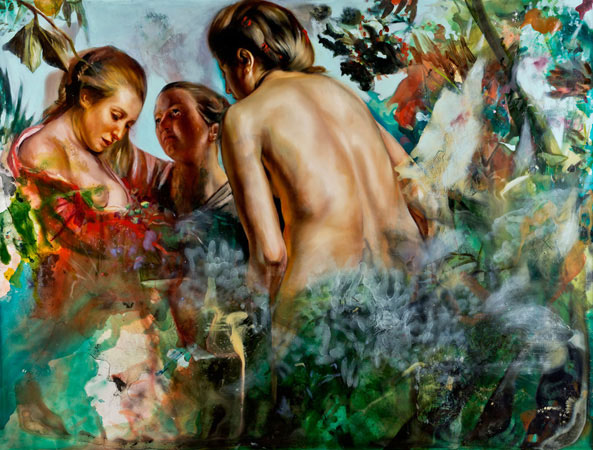 Angela Fraleigh: Ghosts in the Sunlight 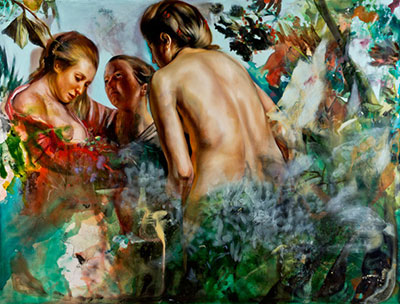 Angela Fraleigh, something has already started to live in you that will live longer than the sun, 2014
oil, galkyd, acrylic, gouache and graphite on canvas, 66 x 84 inches

Angela Fraleigh’s latest presentation at Inman Gallery is a glossy group of paintings about paintings.  She tousles uneasily with the wrought history of the medium, but it’s precisely this ambivalence about the beauty of the Western cannon that gives Ghosts in the Sunlight its substance.  The extensive gold leafing shouldn’t mislead, these paintings are about a lot more than just surface.

Fraleigh populates her canvases with the same supple, nude maidens choreographed (at least in history books) entirely by male artists.  In photographs, these images look like direct one-offs of the Baroque and Rococo titans they emulate, but in person the paintings are less carefully rendered.  Fraleigh works some passages with fine precision, building up the elusive tones of skin through careful under painting, or delicately coaxing out the perfect gleam of a toenail.  In other areas, she appears to move too quickly, with a heavy hand or sticky glazes.  One imagines getting lost in the reverie of it all; the shimmering color and texture of the medium, only to awaken mid-stroke to the queasy thought that these bastions of female beauty and grace are early echoes of our own insidious idealizations. 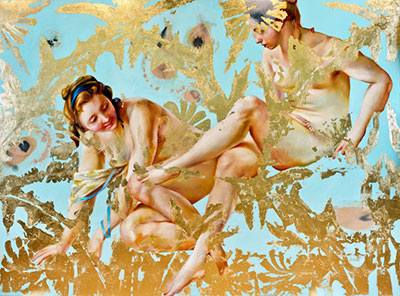 Past the grandly sized canvases of the front gallery spaces, the artist has included a collection of small portraits.  These individual characters, cropped tightly from much larger compositions, reveal various aspects of the roles of women in historical painting.  There are calm and demure ladies, yearning ladies, and warmly smiling ladies; each chastely averting her eyes from the viewer.  In depicting these women, no doubt side-characters to the main drama, Fraleigh’s paint style becomes decidedly sparer.   She’s banishing each illusion by showing us the bones of the paint itself.   These characters are fabrications both metaphorically and physically.  Her titles allude to this as well, as one work suggests, “The truth takes time to unwind.”

For Fraleigh this truth seems especially hard to come to grips with.  It’s obvious that she revels in her medium and its lauded history, but her disdain for the marginalization of female characters is palpable.  That’s why it’s sometimes hard to tell if we’ve caught her in the act of creating or destroying.  In some pieces, like “something has already started to live in you…” Fraleigh hits that balance with striking clarity.  Others tip slightly in favor of one message or the other.  But it’s an unbelievably narrow territory she’s occupying- perhaps the width of one brushstroke.  That makes these paintings about paintings a riveting example of how art’s checkered history can both inspire and dog us.

Angela Fraleigh: Ghosts in the Sunlight
Inman Gallery
Through Jan. 3