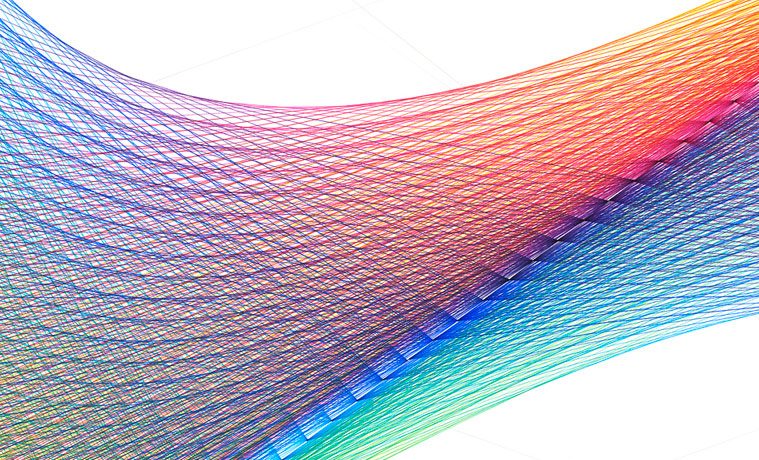 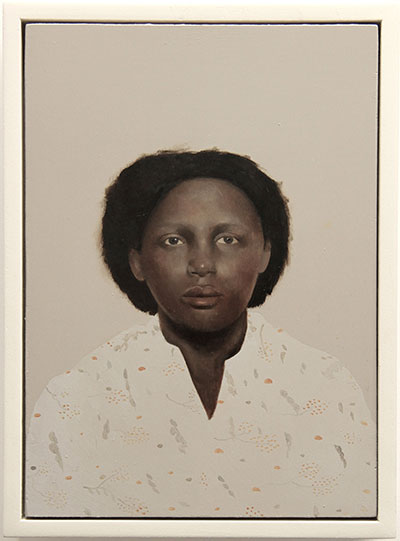 At Conduit Gallery, three separate exhibitions include work by Vincent Falsetta, Gabriel Dawe, and the English artist Sarah Ball. The three separate shows are curated with the intent to present their distinct approaches to art-making in order to reveal how their varied artistic practices may complement one another.

Falsetta, an admirer of Mondrian and early 20th century abstraction in general, approaches his canvases methodically, almost obsessively, with a time-proven technique of layering and pulling swaths of paint, embedded with line, to form an all-over and multidirectional pattern on the surface.  He revels in the tension between panel edges and shapes that vibrate on the surface in varying colors.

At the entrance to the gallery he reveals his process in six elegant small scale paintings with grey-beige color grounds, over a grid that features fragments of his finished pieces swimming on its rough surface. This view into what he sees as he proceeds toward a finished product opens a dialogue with examples of completed work exhibited nearby.

The other clearly new direction, and the best work yet, is Untitled ED 14-6 (2014, 63”x57”) a large oil on canvas with a wide range of colors in the line elements. With this painting Falsetta moves into new territory by combining elements of what could be several paintings into one surface. Here, the image brings to mind not only collage but its immediate successor in synthetic cubism, where color and pattern animated the work of Picasso and Braque, leaving the monochromes of the analytical period far behind. With this work Falsetta may have turned a corner, again.

Gabriel Dawe’s exhibition title implies the organizational notion at work in the show by installing, and including as works of art, the remnants of his temporary thread sculptures after they have been taken down. These are exhibited with drawings, done after the fact, of the pieces in situ as in East Wing X  (2012) at the Courtauld Institute in London. The geometric clarity in the sculptures is countered by the anti-form at work in the spooled and hanging threads arranged in the gallery as a type of afterlife.

Dawe was born and raised in Mexico City and his work is partly inspired by textiles and designs typical of the indigenous people of Chiapas in the southern part of the country.  It also manifests his intent to exercise artistic freedom by challenging cultural norms in Mexico that firmly place knitting and certain crafts in the hands of women. 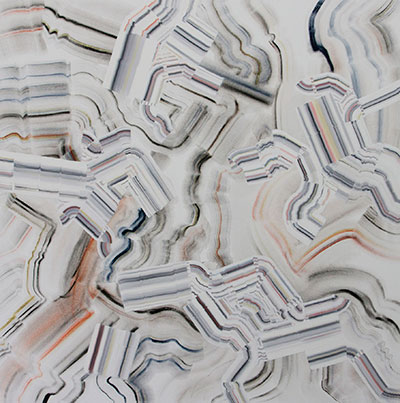 Both Dawe and Falsetta take alternate approaches in their respective work: paint vs. thread, 2D vs. 3D, installation vs. a traditional painting model with images mounted on the wall; but, included in this show together, the similarities by way of an intense approach to the use of line as a determining factor in the pieces brings them together.

With a completely different sensibility Sarah Ball’s work in the project room, Accused, takes the themes and aesthetic models further into the realm of social commentary, cultural studies, and the notion of justice. Born and raised in England, Ball focuses, in this series of pieces, on vintage photographs as documents of the American legal system and the visual construction of criminality. Her small, spare, and flat paintings are appropriated from police headshots of white and African American men and women from the period. For titles she simply uses the particular accusation assigned to the photograph like Thief, Burglary, Selling Fireworks, or Gambling.

The viewer is given no hint as to the veracity of the accusations; rather, they are asked to contemplate the identification between the person as depicted in the painting and the accusation itself. What is it about a particular person that makes them fulfill a social verdict of guilty, or innocent, by virtue of the expression on their face, skin color, or race?

The themes advanced in Balls pieces about social bias, in a period now viewed by some with nostalgia, should never be read to suggest that much has changed in the contemporary world.  In fact, they imply that much ought to be done now to address the same issues she retrieved from another time.