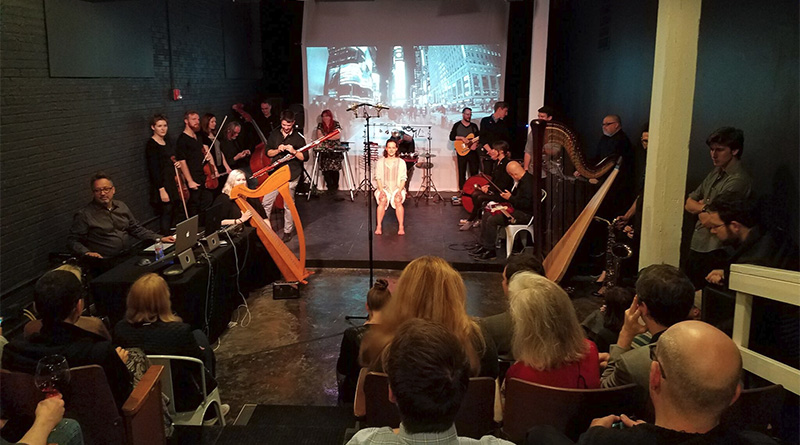 A brief survey of experimental music in Houston

Transitory Sound and Movement Collective in Times Square in 60: An Improvisation for 19 Musicians with Movement and Film, Jan. 10, 2017 at Houston’s Rec Room.
Photo by Mark Wozny.

This article is a patch, some spackling, experimental music duct tape on the rickety machinery of music web content. Although it can be fun (or unfortunately excruciating), let’s not fiddle with defining experimental music. Think of it as a family resemblance in what follows. It is a survey merely intended to be a reminder of things that, due to the structure, scope, and interests of Houston publications, don’t get covered often enough.

This is not intended to be, nor could it be, exhaustive. Please let us know what we’re missing! It is also not free of conflict of interest. I play in some of these series and I co-produce Lean, Bleak. These are some of my friends and I go to these things because I like this music and think it’s important. I don’t think it’s important to ever talk about the “Houston music scene.” How could anyone really grasp all that? A big shout out to Robin K. Williams, a talented performer and artist who wrote a wonderful piece last year surveying experimental music offerings in Austin and gave me the idea to try something similar. Initially I had intended this to be just a list of recurring non-officially-sanctioned-by-organizations series, but I realized that leaves out quite a bit, most importantly the supportive venues that have continually showed themselves to be friends to experimental music.

An incredible amount of support comes from all the Houston visual art institutions: CAMH, Station Museum, Civic TV, El Rincon, DiverseWorks, Lawndale Art Center, and others I must be forgetting. They all put on good shows. Alabama Song, which has one of my favorite rooms to hear music in, has been an excellent host for small experimental music shows for years now. GalleryHOMELAND was a friend the minute they showed up to town. Record stores Vinyl Edge and Sound Exchange host shows regularly. Khon’s will book people. Avant Garden, who hosted They, Who Sound for the last nine years, has been a generous and willing partner for experimental shows. Notsuoh is open to just about anything. New downtown venue Spruce Goose seems promising. So wow! There actually are a lot of friends to experimental music, aren’t there? People love this stuff. Now, on to the semi-regular programming that uses a consistent name, AKA series.

This year, in collaboration with Lawndale Arts Center, They, Who Sound became an official branch of Nameless Sound, but long before now, nine years ago, T,WS was a fledgling DIY experimental music seed organized by NS founder Dave Dove. Not intended to last forever, it’s lasted forever-ish. It’s survived many a regular bartender at Avant Garden. T,WS has always been welcoming and supportive of new developing musicians and non-musicians from all different backgrounds and disciplines. It also catches the quite developed musicians coming through town on tour and presents them in a more intimate context. Like most good things, growth happens, and when it makes sense to take a step forward, it’s the best thing to do. Changing venues changes some things, like the room and so the room sound, but it doesn’t change the spirit. T,WS happens Mondays at Lawndale.

An Exchange Of Noiz

Organized by Spike the Percussionist, the Exchange takes place at Sound Exchange on the third Thursday every other month. Shows usually have around six artists with shorter time slots around 15 minutes per set. Performances range from full on power noiz/power electronics, black ambient drone, modular, glitch, audio constructs, to improvisational ensembles. All shows are filmed and uploaded to their Youtube channel.

The Transitory Sound and Movement Collective

A group as much as a series, the Collective has been one of the most consistently recurring experimental events to pop up in the last year or so. Founded by artistic director Lynn Lane, the series revolves around core members Jennifer Mabus, Ingrid Gerling, and Julia Fox, while incorporating a rotating cast of other performers into structured improvisation process. They’ve done shows at The Rothko Chapel, Arts Mission Oak Cliff (Dallas), The Rec Room and TCU (Fort Worth). The next show will be on June 7 at the Contemporary Arts Museum Houston.

INTERNAL/ETERNAL is the co-project of Rachel Orosco and prolific experimental guitarist Tom Carter. Since I/E #1 in 2016, they’ve used the moniker putting on concerts here and in NYC. They’ve been staging house events in Houston featuring musicians, artists, filmmakers, and writers from all over Texas and the U.S. The “mission statement” says I/E, “celebrates personal (and often singular) visions liberated from conventional musical genre boundaries.” Genre is the reference system through which a lot of music is made understandable and palatable, and a “music scene” can sometimes feel like a genre farm, in which bands are made sense of through predictable genre breeding practices. What a good experimental music series does is actually open up a space without “genre boundaries,” resisting stylistic homogeneity and reductionism.. The next show is on April 26  at Spruce Goose, a pretty new venue downtown.

And here’s my conflict of interest! I organize this HTX/ATX series with Austin artist and songwriter Spencer Dobbs. We try to spread our performances across non-traditional venues that offer an intimate environment to hear the quieter nuances of performances without smoke machines or laser lights. We give love and thanks to Gallery Homeland, Alabama Song, Museum of Human Achievement, and any friends who’ve given us a chance at their house or space. At the moment, we’re trying to be quarterly. We’re always looking to book new people and play at new venues, so get at us. The next show is Aug. 11 at Rudyards.

While there are a only a handful of concerts organized officially under the title Syzygy, Rice regularly puts on phenomenal experimental music programming, covering everything from collaborations with the Moody Center, student organized events like New Art New Music, Rice ensembles like the Shepherd School Contemporary Ensemble or Hear & Now, and more. It’s a lot of stuff that I think people would dig if they knew more about. While shows at Skyspace often attract lots of attention, other concerts that are just as exciting often slip under the radar of press coverage. Kurt Stallmann’s Rice Electroacoustic Labs has collaborated with Nameless Sound, DaCamera, Musiqa, and others. They’ve commissioned really interesting work (recently Hans Tutschku’s Turrell piece); next year George Lewis will be making an installation at Skyspace.

Started in 2012 by Thomas Helton, the HCS is now run by Thomas, Hsin Jung Tsai, and Chapman Welch, who is an Electroacoustic Music Specialist at Rice’s Electroacaustic Labs. They present two to four concerts a year featuring new works by Houston composers. HCS has its own world of different performers and composers who come from all different types of scenes and backgrounds, and they each bring different perspectives to what it means to be a composer in Houston. You can watch some snips on their FB page.

This list can only represent so much. The ecosystem of whatever could be reduced to a “scene” is pretty dense. If any series is a dot on a map, the DIY self-organized shows are the lines that connect those dots. Any traditional resistance to hosting experimental music has not done much to stop good music from happening. In our homes, our garages, and DIY art spaces, creative music thrives. As you can see, not all these series have a FB page or a website; that’s why they’re here. But if you start going to the shows, you’ll make friends, and they will invite you to other cool shows. A whole new world of music can start with just one show.