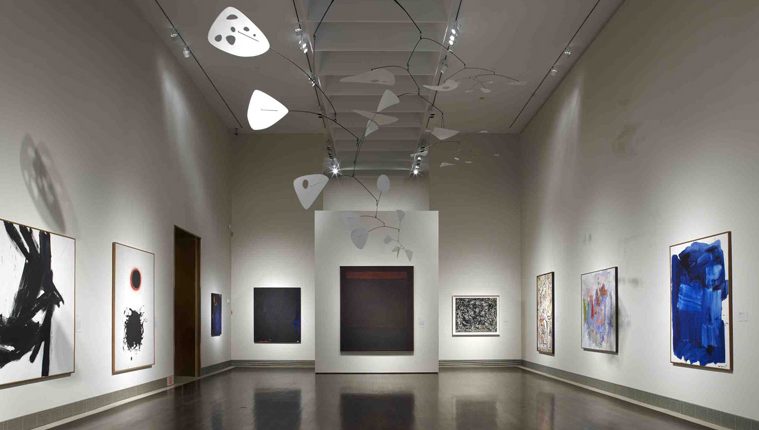 A Gallery With Gravitas

I used to have to drag myself to the Museum of Fine Arts, viagra Houston’s Long Sarofim Gallery, the room in the Beck Building presenting works from the MFAH’s post-World War II American collection. Now, thanks to a few simple but profound changes – part of a broader planned reinstallation of the American galleries – it’s become the room I have to force myself to leave.

The gallery had long lacked cohesion, being composed overwhelmingly of abstract expressionist paintings, but with just enough individual works from other movements or periods to frustrate any attempt to make sense of it.

Even worse, the room’s misfits – Tango, an Elie Nadelman sculpture of a dancing couple (c. 1918-1924), Claes Oldenburg’s hanging sculpture Giant Soft Fan – Ghost Version (1967) and one of Frank Stella’s most reductive stripe paintings (Palmito Ranch, 1961) – were installed as if for maximum distraction. The fragile Nadelman sat on an enormous pedestal in the middle of the room; the Oldenburg — the lone Pop work in the space — crowded out the best painting in the gallery, Jackson Pollock’s pre-drip The Blue Unconscious (1946), on loan from a private collection; and the bright yellow hard-edge Stella, a significant recent acquisition, was inexplicably sandwiched between two black-and-white Franz Kline paintings, interrupting a potentially interesting conversation.

Presiding over – and aggravating – the hodgepodge, A Wooded Landscape in Three Panels (c. 1905), a Louis Comfort Tiffany stained-glass window peered in from the adjacent decorative-arts alcove and was the first thing viewers saw as they approached the gallery.

All those problems have been swept away, starting with clearing out all the sculpture and replacing it with Alexander Calder’s soaring, monumental International Mobile (1949), the room’s indisputable masterpiece. With its aluminum vertical and horizontal shapes painted off-white rather than the cheerful primary colors seen in much of his work, it has a statelier presence than most Calders and casts terrific shadows as its moving parts catch air currents and slowly rotate.

Besides allowing the MFAH to showcase one of its true gems, removing the other sculptures opens up the room, which dramatically changes how you see the newly rotated paintings. The once-intrusive Tiffany window has been sectioned off with a temporary wall, and Painting (1961), a big, dark, brooding Mark Rothko canvas now commandeers the sightline into the gallery. (This also benefits the Tiffany, which thrives in its more enclosed space.)

By 1961, Rothko had moved away from his earlier, brighter palette, which he said distracted viewers from his work’s tragic themes; a few years later, he would begin work on John and Dominique de Menil’s Rothko Chapel commission. In Painting, the only remaining vestige of his past work’s chromatic intensity is the red band that pulses against the maroon background while floating above the closely hued brown and black rectangular fields.

The Rothko has hung in this room before, but it’s previously had to share wall space with several other paintings, which has tended to sap its power. Now Painting, even more than the Calder, sets the tone for the room long before viewers enter, being readily visible from the nearby antiquities gallery.

Fittingly so: The year before he made Painting,  Rothko wrote that “in the burst of splendor not only is all illumined but as it gains in intensity all is also wiped out. That is the secret which I use to contain the Dionysian in (an Apollonian) burst of light.”

The gallery’s mood overall is one of darkness contained by bursts of light, appropriately enough for a generation of artists emerging from both the Great Depression and World War II, many living in relative poverty when they made the works on view. Monochromes and near-monochromes prevail, with black-and-blue (two Clyfford Still paintings, one by Lee Krasner), blue-and-white (Hans Hofmann) and black-and-white (two Franz Klines, which sit alongside a black-white-and-red Adolph Gottlieb “Burst” painting) dominating.

Even the works with more diverse palettes are generally somber. Pollock’s drip painting (Number 6, 1949) is dark; his pre-drip The Blue Unconscious is muted, as is Philip Guston’s Passage (1957), which was painted when he was already growing uneasy with pure abstraction and, working “in a tension provoked by the contradictions I find in painting,” beginning to clump his elegant brushstrokes into areas of color against a graying field. Increasingly those forms would assume the presence of actors on a stage.

Even the most colorful painting – Red Brass (1955), ironically by Kline, the abstract expressionist most associated with black and white – is more striking for its taut, bristling architecture than its palette. It and the Stella flank the exit; while the Stella is still the odd man out, now its placement positions it as one of artists’ exit strategies out of the mannered, overblown self-indulgent dead end that abstract expressionism seemed to represent by the late 1950s and early 1960s.

The Long Sarofim Gallery, which has often included mediocre works that tended to reinforce that caricature, no longer does. The works on view, if not quite masterpieces in most cases, are solid, mature examples of serious artists grappling seriously with their medium. The most exuberant gestural works – Kline’s Corinthian II (1961), which seems to spring off his adjacent, extremely austere Wotan (1950); and Hofmann’s Blue Monolith (1964) – are as notable for their stripped-down, disciplined qualities as for their sense of freedom.

The empty floor allows viewers to position themselves at the perfect viewing distance from each picture, which, in many cases, they’ll see anew because the gallery’s natural light, has been cut off.  As much as Renzo Piano’s Menil Collection has conditioned us to love natural light, these paintings respond well to the new starkness; the Rothko’s maroon and the outer bands of Gottlieb’s hovering red orb assert themselves more than in previous installations. (I’d favor dimming the lights a bit further; Rothko rightly wanted his work shown in low light.)

Once a room with an identity crisis, the Long Sarofim Gallery now presents abstract expressionism the way an encyclopedic museum – not to mention one with hundreds of millions of dollars to spend on 20th– and 21st-century art – should: with gravitas, a strong selection that reflects the diversity of practices that made up the movement, and wide open space. As the MFAH proceeds with plans for a new building, it’s heartening to see it rethinking – and improving on – how it’s using what it already has.