A Kind of Truth-Telling: Laurie Simmons at The Modern 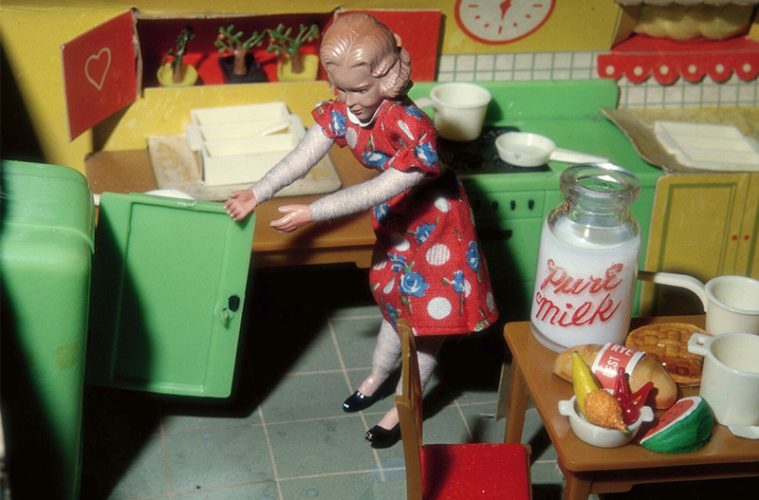 “I’m trying to tell my own truth,” says Laurie Simmons. When we speak on the phone, she is in the midst of preparing for Big Camera/Little Camera, a major survey of her work at The Modern Museum of Fort Worth on view Oct. 14 through Jan. 27, 2019.

The exhibition, which will travel to the Museum of Contemporary Art Chicago next year, showcases Simmons’s work from 1976 to the present, including photographs, sculpture, and film. 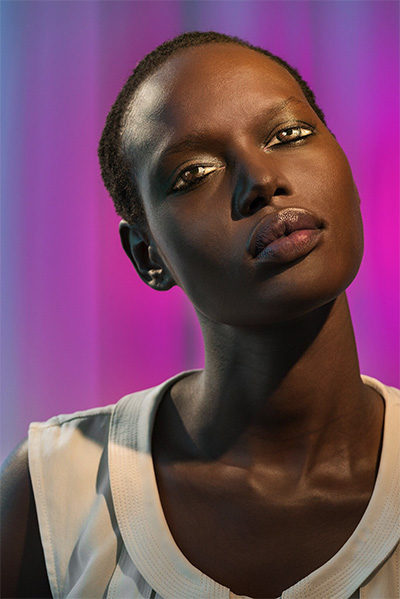 “It’s so amazing to have been working for almost 40 years and still feel like there are eyes on your work. The difficult thing is try to sum up or talk about your work when you’ve been working for so long. How do you sum it up? People ask me, ‘Why did you start working with dolls?’ My answer changes over time.”

Those dolls have maintained a steady presence in the artist’s work. Big Camera/Little Camera presents Simmons’s more recent series, such as The Love Doll, which depicts high-end, life-size Japanese dolls in everyday situations, and How We See, a collection of photographs inspired by the Doll Girl subculture, in which each woman’s expression reads as the ultimate still life: so still and so frozen that the women seem almost robotic. The oversize portraits are familiar yet otherworldly, set against bright, candy-colored backdrops, with the studio lights seemingly catching the glint in their “eyes” which, in fact, have been painted on their closed eyelids. With the artist’s ongoing interest in gender roles and representation, and her use of props, there is a host of metaphors in this literal and metaphorical thwarting of seeing and being seen—masking, hiding, faking it, resisting, thwarting the male gaze, inner worlds, voyeurism, social media filters, and more. Arguably, it’s Simmons at her best.

She started making photographs in the mid to late 1970s, and the kind of photography she was looking at was “very much about a kind of truth telling,” she says, citing Paul Outerbridge, Erwin Blumenfeld, Man Ray, and Aleksander Rodchenko. “But I knew that I wanted to stay in my studio and tell a certain kind of lie, to create a kind of ambiguity, a kind of world that came from memory.”

Simmons further explains that she has always viewed her work as a long visual story. “That’s why the idea of a retrospective is so meaningful, because I can’t imagine that there are any people, except people very close to me, who have read this ‘book’ continuously.” 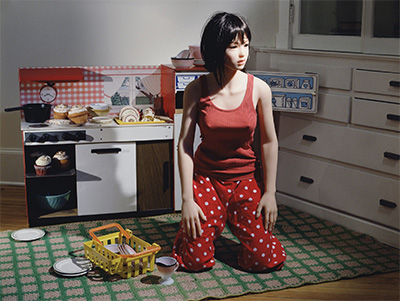 As part of the exhibition, the museum will also be screening Simmons’s films, including the recent My Art (as well as a conversation with her husband, artist Carroll Dunham, later this fall). She tells me about how the film’s character Ellie, a single New York City artist who she plays, resulted from her obsession with another female artist character: Siri, a role she played in daughter Lena Dunham’s 2010 film Tiny Furniture. She thought the portrayal wasn’t realistic.

I’ve often wondered if working in film altered Simmons’s relationship to photography—was it disruptive? Did it change the way she thinks about or works with photography as a medium? Did it shake her ideas of “frozen time?”

“Disruptive doesn’t even begin to describe what it did to my psyche, then what it did to my life,” she tells me. “Both times I made movies I sort of deviated from this path of being a photo-based artist…but it’s always this place of solace to return to, a place of investigation. Familiar, comfortable. It’s like where home is. Especially after a disruptive and amazingly violent event like making a movie, it was such a relief to shoot stills again. I’m very specific about that fact that I am a visual artist and that I tell my story through pictures.”