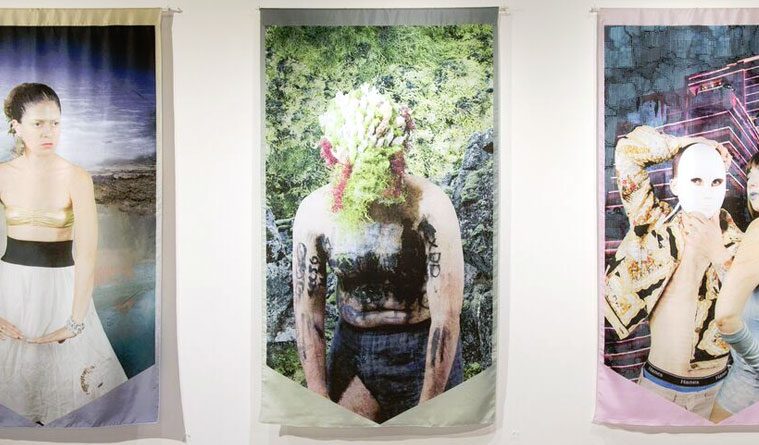 A Space Within a Space

Install shot of Sofia Cordova, I perceive the other and lose myself,  2015.  Photo by David Brown. 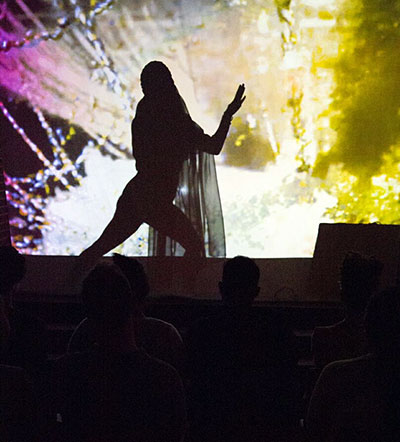 Cordova’s performance, Echoes of A Tumbling Throne (Odas Al Fin De Los Tiempos) Test #4, which took place April 15th, was a 15-minute performance exploring the end of pop culture through songs translated, transformed and performed in Spanish by the artist. Knight’s performance, Keep Some Sun on Your Face, which took place April 17th, was a collaborative and multi-faceted piece exploring Black American survival through the use of various elements within Black entertainment culture. While both artists’ approaches were distinctly different, the dialogue created between them was certainly interesting, and provide the perfect springboard for delving deeper into She Works Flexible Director Lynne McCabe’s intent and purpose for the space.

Houston is not unaccustomed to exchanges. In a city whose growth has depended on global transfers of technology, energy, and, most importantly, money, Houston lives and breathes commerce of all kinds. The dialogue surrounding the transference of critical cultural capital, however, particularly relating to the city’s marginalized communities is one component of Houston’s transactional culture that is perhaps undervalued, occasionally to the point of total marginalization. It is in this space, this gap between the city’s monetary dealings and the burgeoning global contexts within which its social classes and histories are nestled, that McCabe’s commercial and alternative gallery space hopes to thrive.

Described as a “site for discourse and poetic exchange,” She Works Flexible is endeavoring to create meaningful dialogue between Gulf Coast artists and artists based in national and international communities, with particular focus on the work of queer artists, women artists, and artists of color.

She Works Flexible is really an extension of McCabe’s own practice and an acknowledgement of the apparent erasure of women from the history of Relational Aesthetics, particularly women artists of the 1970s whose work, like that of Mierle Laderman Ukeles, connected their artistic practice to everyday acts and roles, such as motherhood. 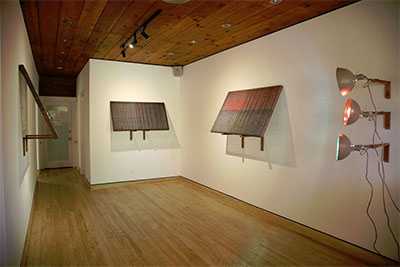 During her time at California College of the Arts, McCabe explains, the revelation of such work helped to liberate her from an “internalized misogyny” which caused her to resist incorporating her role as mother into her practice. From this background the first rendition of her space, She Works Flexible Now, was born in Berkeley, California and was based in her home. Her projects were funded through bake sales and housed “a variety of artistic endeavors, from child-rearing to occasional performances, to project “research and development” and functioned as a “library, an exhibition and performance space, and a fireside discussion forum” for participants with the overall intent to use art as a panacea for community. McCabe described the project as “knowledge-making connected to the body,” and hopes to expand this very concept of exchange through exhibitions and programming in her new space.

Still drawing from the feminist artists who “galvanized the margins” in the 1970s, McCabe envisions her Houston space, conveniently housed in the former location of The Brandon, as a point where she can experiment and re-imagine the model of the commercial art gallery and alternative art space, while giving room to artists and visitors to re-imagine their role and place in the local and global artistic arena. While some organizations choose to completely reject the current economic system that governs the art world, McCabe hopes to actively engage with the socio-economic forces at play within Houston’s art market.

McCabe recalls a quote by French philosopher Luce Irigrary, that encapsulates the point at which two worlds collide to make a new world in which elements from both can be shared, something she hopes will arise from her own experiment; the merging of the models of the commercial and alternative, non-profit gallery spaces into one: “this never a completeness of the One, but constitution of two worlds open and in relation to the other, and which give birth to a third world as work in common and space-time to be shared.” Making her purpose, overall, the exploration of how explicitly money plays a role in art and to make conversation surrounding that fact easier for artists to have. 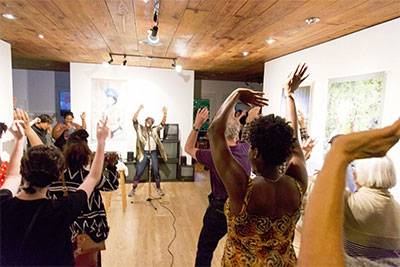 The location of the space at Cafe Brasil itself even lends to this endeavor. “Credit has to really go to Dan Fergus [owner of both Brasil and the gallery space] for allowing me to do this radical experiment showcasing queer, minority, and feminist work here,” McCabe is quick to point out. Its centralized location within Montrose, long a hub for Houston’s queer community, makes it not only poised to engage monetary capital but also to engage with important questions about the transformation of the neighborhood and this transformation’s impact on those who lived in the Montrose community of the past. This “space within a space,” as she describes it, has the added capability to inject conversations surrounding minority issues into the environment of people not otherwise exposed to them through art.

McCabe plans to organize exhibitions in which local artists are paired with artists from outside the Gulf Coast region with the intent to contextualize their work within a more globalized artistic framework. To further this dialogue, each exhibition will feature text by a writer whose interests correlate with the theme of the show. McCabe’s smaller gallery, Flex Space, will be a place where emerging artists can experiment, take risks, fail, try again, and expand their practices. Flex School, another component of the project, will also provide free classes in various fields such as philosophy to anyone interested.

Returning to I perceive the other and lose myself, what I have enjoyed the most about the exhibition are the objects. On the one hand starkly different, the works of individual artists, on the other hand, each possess a power to successfully render familiar cultural tropes into social commentary. If these pieces are any indicator, She Works Flexible is poised to provide a strange, beautifully complex artistic vision to Houston.