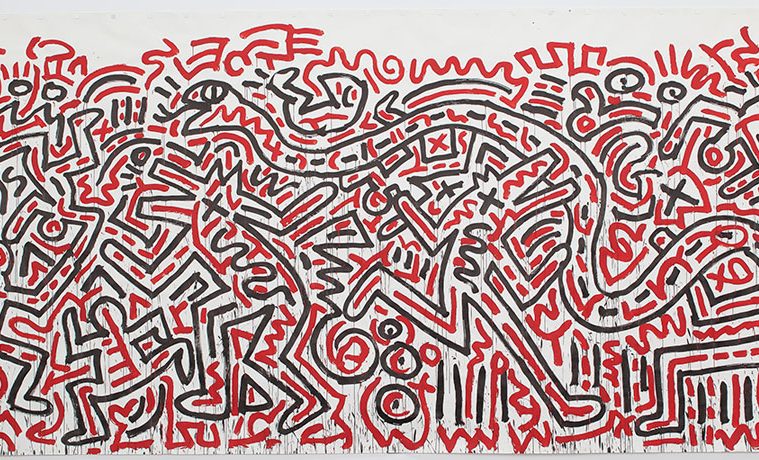 Urban Theater Revisits the “Everything in Between” Art of the 80s 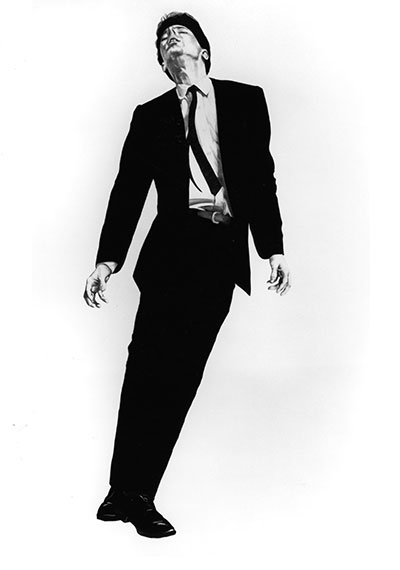 Set to debut at the Modern Art Museum of Fort Worth Sept. 21, Urban Theater: New York Art in the 1980s promises to be a blockbuster exhibition with highlights from major artists who helped define a generation. Seminal works by the likes of Jenny Holzer, Jeff Koons, Barbara Kruger, Sherrie Levine, Richard Prince, David Salle, and Cindy Sherman have been brought together by Chief Curator Michael Auping, who conceived the show as a means of exploring the big themes of the 1980s: appropriation, the return of painting, graffiti, feminism, political activism, and the rise of the artist as celebrity.

Auping spoke with Leigh A. Arnold about the exhibition and his memories of the period it covers. A condensed version of their conversation follows.

MICHAEL AUPING:  It was remarkably synthetic, I think. And by that I mean it had absorbed a lot of what had come before it. It had absorbed the scale of Abstract Expressionism and Minimalism. It had absorbed some of the conceptual aspects of conceptual art, some of the theoretical aspects of conceptual art. I think what distinguished the 80s was a population of Baby Boomers who had come of age, and they were very ambitious. This is a group of people, like myself, quite honestly, who grew up on television and advertising and they were also university educated. If you went to a studio in the 80s, you didn’t feel like you were in a bohemian atmosphere. I mean, everybody wore black, but outside of that there was nothing tawdry or downtrodden about it at all. It was a kind of a glitzy black.

MA:  Very professional. Because not all of them, but many of them, had gone to major art schools—whether it be Yale or Cal Arts in California. Many of them went to the Whitney program for graduate work. So they were all very skilled in art theory and in museum practice and in art installation. It was a veryaware generation.

A+C:  How did you choose to organize the exhibition? 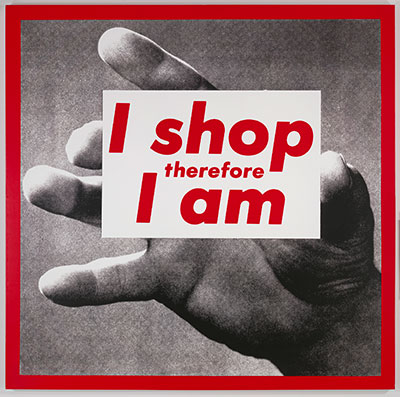 MA:  The show is sort of chosen around the most written-about and talked-about themes or aspects of the 1980s. You had the “Bad Boys of Painting”, which were Julian Schnabel and Eric Fischl and David Salle. And then you had their feminist counterparts in Cindy Sherman and Barbara Kruger, Jenny Holzer.

I would say one thing that really does distinguish the 80s was that feminism really came of age. Feminists were no longer pioneering. They had figured it out. And I think their art—Jenny Holzer’s and Cindy Sherman’s and Barbara Kruger’s—really showed that they were here to stay and that their art was going to be about society and about gender. And I think there was a really interesting friction/dialogue that took place between male painters, in particular, and female artists. In the sense that I think some of the males were slightly threatened by the feminism and as that happened, I think the paintings got bigger and bigger.

But some of that wasn’t just about feminism; it was about harking back to Abstract Expressionism and trying to reignite painting. You know, the 70s was a very conceptual decade and painting did not fare well. And there was very little critical dialogue about painting in the 70s. And Schnabel and Fischl and Salle and Peter Halley and others really tried to reignite the practice of painting and make it relevant again. And then that came up against a more conceptual group, which was the so-called Pictures Generation.

There was a famous exhibition done in 1977 and ironically a lot of the people identified with the Pictures Generation were not in the Pictures Generation show, but that’s okay. But we’re talking of course about Cindy Sherman, Richard Prince, and Robert Longo. There were the painters versus the Pictures people. And that created a really exciting dynamic.  It forced you to sort of pick sides. You know—how could you possibly like David Salle’s naked women with their legs spread open and at the same time, Jenny Holzer? Or Barbara Kruger? Or Cindy Sherman? And so, it was exciting in the sense in that people had their “people.”

A+C:  You grew up in California and started your career as a curator out there. With that insight, how would you describe the differences or similarities between the New York artists versus L.A. artists—East Coast vs. West Coast—in the 80s? 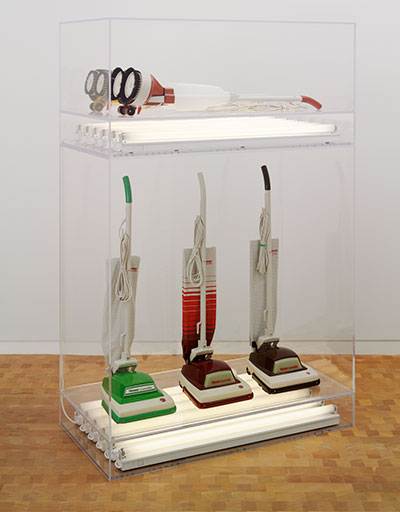 MA:  It’s a very good question. New York was still, in the 80s, arguably the most cosmopolitan place on the planet, when it came to the art world. There were a lot of very good artists in California in the 80s—when I think of 80s California, I think of Mike Kelley and people like that. But, prior to that I’d visit Robert Irwin’s studio and Ed Ruscha’s studio. The difference between the two places was that in California, we hardly ever saw each other, so there was very little dialogue. The distances were so great that there was no critical mass. In New York, you had the music clubs. I remember spending a lot of time in the 1980s hung-over and very tired because people would go out to the clubs—the Mud Club or CBGB’s or the Palladium. And I don’t know where everybody got the money, to be honest. I was a poor curator always worried that I’d be stuck picking up the tab. But L.A. didn’t have that kind of critical mass and as a result, the L.A. artists tend to be quite individual. There aren’t groups. You don’t have a Pictures Generation in L.A., really. Ironically, though, keep in mind, that Fischl and Salle and Ross Bleckner all went to Cal Arts and moved to New York in the early 70s.

Cal Arts plays a role in this as a kind of theater school to this ambitious group of New York artists. And the exhibition is titled Urban Theater. The 80s was all about theatricality, and Cal Arts was founded by the Disney studios as a theater school for Disney and other movie studios. A lot of avant-garde artists ended up going there and I think some of the theatricality you see—certainly in Eric Fischl’s paintings or David Salle’s—comes out of this dialogue with performing arts people at Cal Arts.

A+C:  You mentioned earlier how these artists were highly theoretical. I’m wondering if this magnification of the theatrical of the 80s is almost a post-modernist rebuttal of the modernist dogma that was promoted by Michael Fried with Art and Objecthood and Clement Greenberg?

MA:  Absolutely. I write about that in the book. For Fried, painting was all about flatness and it was all Greenbergian. It was all about what can painting do that no other thing can do? Which reduced painting to surface, objectness, color, and gesture; that’s it; there was nothing left. And because of this, the 70s became more sculptural. There was a rejection of painting in the 70s because of Fried and Greenberg’s formalism. And the artists of the 80s said “Well, wait a minute. Let’s…we can do all of this!” Fried’s argument was that when art became theatrical, it stopped being visual art, it became theater, with theater being everything that happens in between painting and sculpture. Well that’s exactly what the 80s artists are—they’re everything that’s in between. That’s why I insist on it being this synthetic decade. They were synthesizing as much as they could possibly get their hands on. And much of it came from television and film.

A+C:  You mention the Eric Fischl painting as being an iconic work—are there any other objects that you specifically had in mind from the very beginning of the show’s conception?

MA:  Oh yeah. I had to have a great Julian Schnabel Plate Painting. There’s a really iconic work by Barbara Kruger that I didn’t think I would get—it’s a large mural: I Shop therefore I Am. I always assumed those were in an edition of five or six, but it’s a unique painting. There’s only one of them in the world. I had to have a great Jeff Koons vacuum cleaner piece and an equilibrium tank. And obviously a great Jenny Holzer LED sign.

We have another really iconic work, a very controversial work that we borrowed from Richard Prince titled Spiritual America. It’s a small photograph, it’s about 20 x 24 and it’s of a little girl—Brooke Shields—nude. It was very controversial in the 80s and it sort of plays into the idea behind the popular Calvin Kline ads of the 80s, but also Mapplethorpe and gender and male macho-ness. Here is this photo—just re-photographed by Prince—of this young Brooke Shields, nude. It’s going to be placed next to some other photographs by Prince of a series of Monster Trucks. And that is Spiritual America right there.

A+C:  What did the decade of the 80s mean to you personally?

MA:  My daughter was born. That was a big deal. And the 80s was a time when I really came of age as a curator, so I was doing historical things, but also some contemporary things. And I ended the 80s by being the commissioner of the American Pavilion at the Venice Biennale and I took Jenny Holzer.

MA:  The first woman ever to be in the American Pavilion. And so, maybe that was my culmination of the 80s. The women won.

MA:  Good for you! Exactly! Good for all of us!