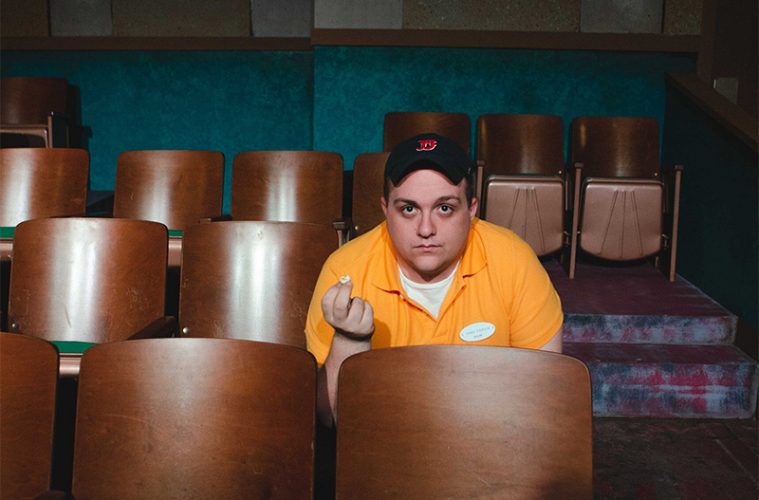 Greg Cote in the Horse Head Theatre Production of The Flick. Photo by Tasha Gorel.

Greg Cote lived on all three US coasts before he reached the sixth grade. When his Dad retired from the Navy in 2000 the family found themselves in Lake Jackson, Texas trying to decide where to go next. Young Cote begged his parents to stay so he could finish schooling here and have what he called a semi-normal high school experience. So after the first 11 years of his life as a nomad, that’s how Greg Cote became a Texan.

He became involved with the theater program at his high school and with the local community theater, Brazosport Center Stages at The Center for the Arts and Sciences. Here he got to know “the standards,” those plays that seem like they can’t not be done, but not necessarily shows you would see in your standard high school auditorium or UIL competition. It was at The Center that Cote first became aware that theater was something people studied in college when someone casually asked him “so you are going to study theater, right?” Yes…yes I am, he thought, now that he knew he could. 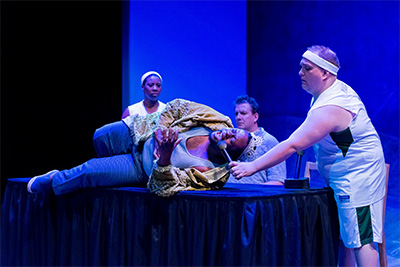 “There was a lot that went into me choosing UH for college,” he says about his motivation. “Not the least of which was the concentration on straight plays. I had always felt more connected to the storytelling that took place in the plays that I had seen as opposed to the musicals I had seen at that point. I couldn’t explain it, I just always felt like that was the work I wanted to do.”

As he read more and acted onstage at school he started to hone in on what type of theatre he wanted in his wheelhouse. Of course Cote was also attending as many plays as possible. In 2010 he saw The Catastrophic Theatre’s production of Our Late Night by Wallace Shawn. This was Cote’s first Catastrophic Experience and Wallace Shawn’s deviant realism affected him deeply.

“I had never seen a show like it. From top to bottom it completely confronted all the things I thought that I knew about plays. The content was uncomfortable and strange and at times disgusting and yet I was completely enamored with every character. It came and went in the middle of conversations. It had no linear plot or really plot of any sort other than…there is a party and these people are at it.” 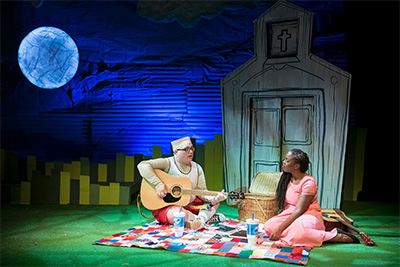 Our Late Night became the first show Cote would see more than once and those kinds of firsts are hard to forget.

After graduating in 2012 Cote’s nomadic childhood habits kicked in and he moved to Austin, TX, but after six months he was back home in Houston as a Guest Artist in Hit-Lit by Robert Wuhl at the University of Houston, which then also remounted in New York’s Queens Theatre in the Park for two months. Cote saw all the theater that he could see, but also solidified his suspicion that New York City was not the place he wanted to practice theater.

“I talked to a lot of people about the acting scene and it all seemed to come down to getting work just to get work. To do a play because it might be the thing that got you noticed and famous and it just felt weird to me. I wanted to do plays I liked and wanted to do work that excited me and that seemed like the last thing on everyone’s mind there.”

Back in Houston, Cote did two Houston Shakespeare Festivals in a row. In 2015 he was cast in Classical Theatre Company’s A Christmas Carol and for the first time he didn’t feel like “that UH kid” anymore. Cote now felt like a real member of the Houston theater community. This version of A Christmas Carol was directed by Philip Hays; Cote had been a fan of his ever since seeing his CTC productions of Ubu Roi and Faustus.

“It is so important to see shows; it can change your life. When I really think back to the truly life changing shows —those were all in Houston. It made me feel beholden—in a good way—to keep making art in Houston, with the people whose work I had come to admire.” 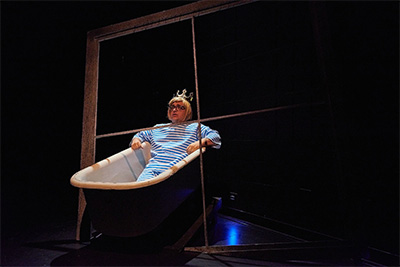 And so Cote stuck around, slowly checking off his list of companies to work for and plays to act in, compiled over his years of attending local theatre and through the relationships he was continually building. Cote has been seen on Houston stages at Mainstreet Theater, Landing Theatre, Horsehead Theatre Company, Classical Theatre Company, Rec Room Arts, Unity Theater, Houston Shakespeare Festival, 14 Pews, and was finally cast in The Catastrophic Theatre’s production of Snow White in 2017, which was a huge milestone.

Cote’s feelings about what it meant to be a working artist began to change too. Just out of college he dreamt of being a full time actor making a living on the stage. He got a taste of the journeyman’s life with Hit-Lit in NYC. But that’s not the life for everyone, in truth it’s not the life for many actors. Soon Cote realized that he wanted a home base to work out of, that he must like every job he took and that all work must relate to the arts somehow, even if tangentially. He accepted a position as the middle school theatre teacher at Duchesne Academy of The Sacred Heart. Not only does this fulfill Cote’s work related requirements, in a way it frees him up to be choosier about what roles he accepts. 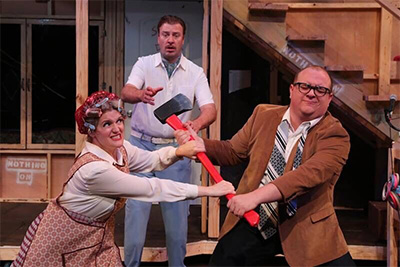 Julia Traber, Foster Davis and Greg Cote in the Unity Theatre production of Noises Off. Photo courtesy of Unity Theatre.

Now Cote can pursue roles that entice him. He will absolutely email any director producing a show he wants on his resume to ask if he can audition, and shows up every time someone asks him to audition as well. This persistence has paid off and Cote is a regular, and one might even say, go-to actor in Houston.

He has also made time to pursue his other onstage love, puppetry. Cote was introduced to puppets during childhood via Sesame Street, beloved movies, and Henson classics such as The Muppet Show. Houston puppet veterans Bobbindoctrin gave Cote a grown-up dose of puppets he didn’t know he was missing and left him wanting to create more. After mulling it over for years, and realizing this itch wasn’t going away, lo-fi puppets was born. Cote and creative partner Alli Villines are building lo-fi puppets into a portable puppet experience, learning the craft along the way. Houston is in need of some new puppet blood and lo-fi puppets, along with their creators energy, is bound to fill the gap.