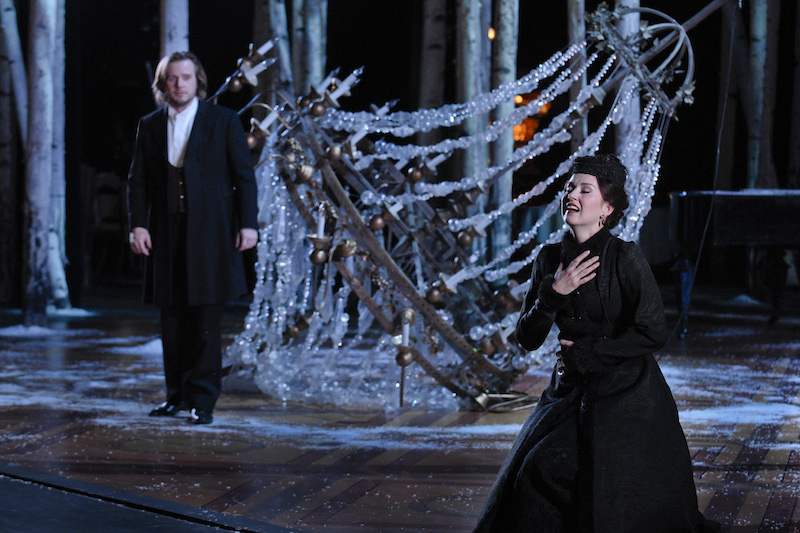 All About the Music: Tchaikovsky’s Eugene Onegin at the Dallas Opera

The piano is omnipresent.  From the first scene to the last, in the garden and in the ballroom, draped with a white cloth or serving as a hiding place, the piano is there.  It is in all seven scenes, but what is the significance of the piano in the Dallas Opera’s current production of Tchaikovsky’s Eugene Onegin?

Eugene Onegin is an opera by Pyotr Ilyich Tchaikovsky based on the classic Russian verse-novel written by author Alexander Pushkin.  The novel, a commentary intended in part to criticize Russian society of the time, was published originally in serial form between 1825 and 1832.  It tells the story of a world-weary and cynical aristocrat whose arrogance leads him to reject the love of a beautiful young woman and to kill his only friend in a duel; both decisions he comes to heartily regret.  Tchaikovsky originally wrote the opera, first performed in Moscow in 1879, as a series of vignettes. However, the narrative clearly portrays the self-destruction of the eponymous sociopath and a memorable leitmotif unites the three act opera.

The Dallas Opera’s production, sung in Russian, was originally created for the Israeli Opera Tel Aviv-Jaffa.  As the curtain opens, birch trees fill the stage – traditional Russian symbols of spring, feminine beauty and virginal purity. Alexander Lisyanski has created magnificent sets throughout the production. The leafless birch trees effectively serve as a portent of events to come and the crystal chandelier that lays on the stage floor in Act 3 clearly encapsulates the fate awaiting Onegin.

Baritone Andrei Bondarenko personifies ennui as the title character.  Bondarenko’s Onegin slinks around the stage making it clear that he is disinterested in everyone and everything. But in the first scene of Act III, Bondarenko unleashes his previously restrained voice. Its richness and fullness during his aria, Uzhel ta samaja Tatyana, conveys his newfound passion for Tatyana whom he had rudely dismissed years ago.

While the opera and novel are named for Onegin, Tchaikovsky clearly revered Tatyana as the ideal woman. Soprano Svetlana Aksenova is bright and gleaming as the young Tatyana writing a love letter to Onegin.   Aksenova vividly portrays the transformation of a naïve young country girl into a regal woman. The passion in her voice when she reminds Onegin of his sermonizing rejection of her youthful declaration of love is heartbreaking.

Bass Mikhail Kazakov also brings emotion and power to his role as Prince Gremin when he sings of Tatyana as his ‘salvation’.  Kazakov reaches the low notes with agility and his performance earned cheers of ”Brava!” from Sunday’s matinee audience.

Tenor Stephen Costello as Lensky displays powerful outrage in his role as the unfortunate friend of Onegin.   Costello’s emotion is palpable in a brief moment when the orchestra falls silent as he bade farewell to his love Olga.

A comic attempt falls flat in Act 2 when tenor Greg Fedderly in the role of Triquet appears atop the piano wearing a dress, gloves and bonnet.  He soon strips off the female attire and then finishes his number in his shirt and trousers on the ground.  Curious choice.

Another light-hearted moment is more successful when contralto Meredith Arwady as Filipievna is encouraged to sing of her first love.  Arwady is natural and sweet as the dear nanny.

The mood of each scene is perfectly enhanced by lighting designed by Laurent Castaingt.   The glittering of the chandelier in the ballroom scene and the pinpoints of light shining through the backdrop highlight the signature Tchaikovsky waltz with which Act 3 opens.  Cooky Chiapalone ably choreographed numerous dance scenes throughout the production.

Emmanuel Villaume, Dallas Opera Music Director, conducted the Dallas Opera orchestra with enthusiasm. It’s a stellar performance of signature Tchaikovsky Romanticism.  The ever-present piano is Tchaikovsky reminding the audience that it is first and foremost about the music.