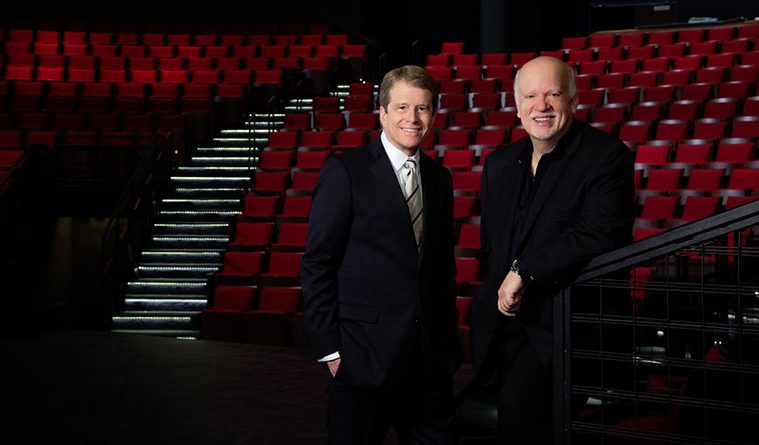 A conversation with Gregory Boyd and Dean R. Gladden 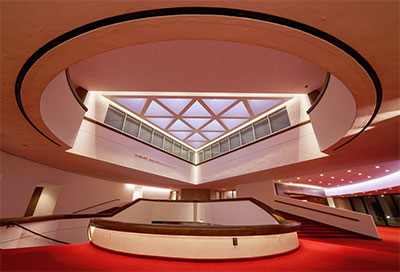 In early October, the Alley Theatre returns to downtown Houston, and to the results of the $46.5 million renovation of its iconic, two-stage home after a full season performing at the University of Houston.

Helmed by artistic director Gregory Boyd and managing director Dean R. Gladden, the Alley remains true to its 1968 founding by theater visionary Nina Vance. Today, the company produces some 500 performances each year with a calculated economic impact for Houston of $34.5 million. With a current staff of 175, the company has taken its productions to 40 American cities, as well as to Berlin, Paris, St. Petersburg and to Broadway and Lincoln Center in New York.

A + C theater writer John DeMers sat down with Boyd and Gladden recently to talk about the upcoming season, but especially about their feelings on having steered the renovation to the point that the Alley can begin a newer, richer second life.

What does the milestone of the Alley’s second life mean to you? What does it feel like?

Gregory Boyd: It’s thrilling—and hugely transformative in all sorts of ways.  It’s not just the theater space that’s new.  The renovation allows us to do so much more, and widen the range of plays we can do. It utterly changes the ways in which we can create new work, and give the work we do life beyond the Alley. The original theatrical space, as much as we loved it, was difficult to produce in, very difficult to move shows in and out of, and limited by the technology of its time. 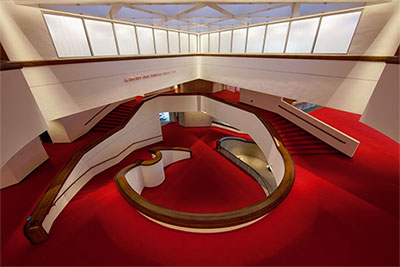 In what ways is the renovated/renewed theater your vision for the future, as opposed to continuing to fulfill Nina Vance’s original vision?

GB: It’s not hyperbole to say it changes profoundly what we can do, and not just from a hardware point of view. The renovation was driven as much by artistic and company ideals as it was about ‘modernizing’ the space. The new theater is much more capable on a technical level, but more importantly, it offers many more possibilities for the theatrical imagination. New work can become much more a part of the Alley’s repertoire. My dream is that the writers we work with will join the company alongside the actors.  The Alley is already unique in its embrace of the resident company of artists, now we want to add to that a renewed commitment to new works, new writing.

GB: When the theater was built in the mid-1960s, the prevailing fashion of theater production was for minimal scenery, a production design based on the moving actor and light, basically. So no fly space, no trap space, no wing space, none of the tools common to a producing theater since, well, since the 17th century! As new theatrical story telling techniques were developed, from the simple to the elaborate, in the explosion of American and World Theater in the 1970’s and beyond, a building like the Alley became limited very quickly. Or more seriously, was proven to be very limiting. During my time at the theater, we worked with amazing designers, who all tried to work within the limitations of the space, and often they pulled miraculous rabbits out of the hat in spite of those limits. But whenever we were asked to share the work, to move a production to New York or an European festival or wherever, we would have to rebuild it from top to bottom, because the old Alley was unlike any other theater in the world—so idiosyncratic and peculiar, that nothing could easily go into or out of it. So that fact alone forced us to turn down some interesting projects, and not consider at all certain new plays and projects that required an up-to-date theater space. 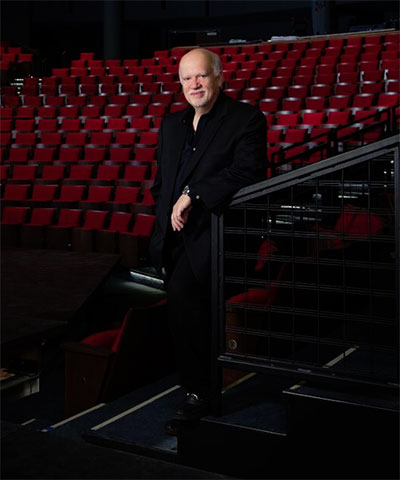 What were the biggest challenges you faced pulling off this project, from fundraising and planning to actually getting it done?

GB: It is an amazing and wonderful fund raising effort by the Board and the warm supporters and friends of the Alley, and it’s still going on! It was a mammoth undertaking—that involved not only the staff and artists and the audience too uprooting from ‘home’ for a year and moving a big operation across town, and then moving it all back again. I think it’s unprecedented in the history of the US nonprofit professional theater to have achieved this, an heroic effort from everyone.

Dean Gladden: There were three major challenges. In fundraising, we had to raise twice as much money as the previous Alley Theatre capital campaign that ended in 2005. Second, renovating a historic building, which was primarily made of concrete and steel in twelve months was a herculean task. Third, finding a location off-site to perform the entire season and convince our audience to follow us was very challenging.

What were the most memorable lessons you learned from the construction itself? How will it feel to not be wearing hardhats as your fashion statement?

GB: Well, we are all pretty used to being surrounded by sawdust and tinsel whenever a show was being built. The difference of course is that when we make a play, we know it’s an evanescent thing. That’s the beauty of theater as an art. It is immediate and it lives in the moment and in the memory of those who see it. A theater building is built to house all this evanescence—but for a long, long time. It’s a beautiful metaphor—the most beautiful I think—of what it means to create work for human eyes and ears and imaginations and spirits.

DG: Preplanning every detail and allowing for all types of contingencies is the key to success. Our planning process took several years, working with the architects, engineers and our staff to build the best thrust theater in America. Every detail was well-planned and executed so that the project finished on budget. Every staff member had input into the process so the entire team is looking forward to taking off the hard hats and creating art in the new theater.

The time at UH? What were the best and worst parts of that? Perhaps most importantly, do you feel that built a bridge for young audiences to fall in love with live theater and follow the company back downtown?

GB: I confess, I felt some trepidation at the prospect of moving our operation and making shows outside of home. We didn’t know how the audiences would react: Would they come and would they engage? And those fears were blown away completely very early on as we started to play at UH. The audiences were fantastic and the student community was enthusiastic and the whole UH community was very welcoming and accommodating. I don’t think it could have worked better—and that’s in large part due to the University staff and leadership and the passionate efforts of the Alley staff and company coming together.

And yes, we are excited to welcome all the new audience members we found at UH to follow us downtown to the spectacular new Alley, and to welcome home all the loyal audiences and subscribers that went with us and were so supportive.

DG: Our experience at UH was fantastic. The Theatre Department and theater students embraced our residency as an important learning experience. We had students in our productions and conducted master classes and workshops. The administration could not have been more supportive and it all paid off as we had tens of thousands of patrons attend who had never been to UH. They were all very impressed with the campus and the first-class facilities that the university offered its students. The Alley expanded its young audience, and they have already signed up for our first season downtown. 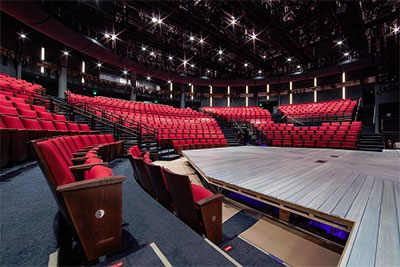 How did the new buildings, the opening and its components affect your choice of plays for the new season?

GB: I wanted the first season in the new space to be a celebration of the Company, and so there’s a mix of new work and a couple of classics,  but all of the productions are built around the idea of a Company. So we are welcoming everyone to our new home, yes, but it’s a home for a group of artists and audiences that are not unfamiliar with each other.

How do see One Man, Two Guvnors as being right for the relaunch – as opposed, say, to Long Day’s Journey into Night?

GB: We wanted to open with an experience that was big and bright and funny and theatrical.  As soon as we could we went after the rights to make our own production of One Man, Two Guvnors, which had been such a spectacular hit in London.  It’s pure pleasure, and a great piece for the actors.  I had directed As You Like It in the UH season, and I loved that cast so much—so many great Alley Company artists and a few actors new to the Alley. I very much wanted to work with that particular cast again, in a very different kind of comedy.

But speaking of Long Day’s Journey Into Night, it was also important to include an American classic in the season.  Michael Wilson’s production of Long Day’s Journey Into Night for the Alley with a cast led by Ellen Burstyn and David Selby was a great triumph for us, and one of my favorite Alley productions. And I very much wanted Michael to be with us again for this new season in the new space – so The Night Of The Iguana is a project that we are all very excited by. It’s one of our first Tennessee Williams since our discovery and premiere of Not About Nightingales, another Alley favorite.

Several local theater companies are in the midst of rebuilding their spaces or planning new ones. What does this all say about the state of live theater in Houston?

GB: Thriving. I’m excited about all the activity, and thrilled that the Alley’s re-invention coincides with such a refulgent time. Our renovation is a game changer for Houston and its theaters, and its audiences, and for the American Theater, too—it increases the possibilities fivefold. More work on our stages: That is what we are about. More art for Houston is good for everyone.

DG: This is the best time for theater in Houston. Houston audiences are the beneficiaries of a number of new and renovated theaters. The new MATCH theaters in Midtown, the renovation of Main Street Theater, the planned renovation of Stages Repertory Theatre in Montrose, the new Queensbury Theatre and the planned new theater for A.D. Players in the Galleria. This certainly speaks to the vibrancy of theater in Houston.