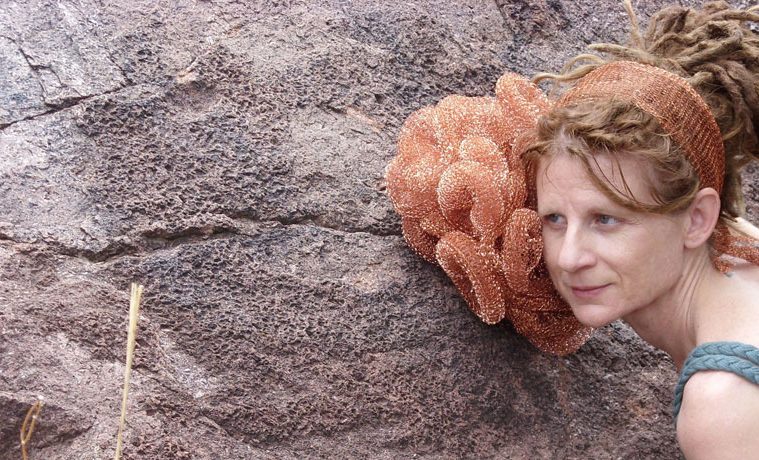 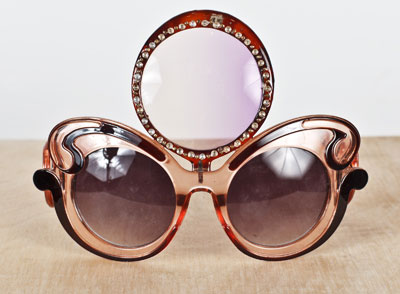 Artist Alyce Santoro believes that everyone is endowed equally with the ability to imagine. It just takes practice. As an inventor, sculptor, weaver, activist, and more, Santoro personifies “multimedia artist.” Her formal training as a scientist, alongside her desire to illustrate the intangible parts of research, led her to the world of conceptual art. Today she marries science with art and embraces dialectics as opposed to rhetoric, showing that data and the senses are not mutually exclusive when it comes to the human experience.

Santoro is a Texas transplant from the East Coast where, she says, she fit in too well. She welcomes the paradox of being a marine biologist in the desert of Alpine, just a few miles from another paradox – the art-Mecca town of Marfa, where she was included in the 2011 Texas Biennial.

Santoro classifies much of her artwork as a collection of “philosoprops” (philosophy + propaganda), a term she coined as a way to articulate the “social interventions and apparatuses” that comprise her artistic practice. These provocative yet unassuming devices, implements, and illustrations, whether hand-made or ready-made, are meant to generate open-ended discussions and ideas. “I think of them as philosophical toys,” she says. 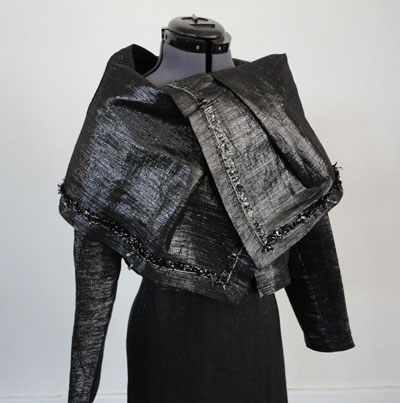 More than mere flights of fancy, Santoro’s philosoprops ask poignant questions and demonstrate nuanced concepts about society, politics, and the environment, all peppered with her disarming humor. For example, the collection includes a solar-powered laundry drying apparatus (a clothesline), third-eye sunglasses, and an ashtray/teacup that implies, “If the teacup is used as an ashtray, can it really be considered a teacup, or does it take on a new existence as an ashtray?”

Santoro does not stake sole claim on the use of philosoprops, acknowledging that throughout history humans have used such things any time there is a “need to express the ineffable, make the invisible visible, or connect with the intangible.” As an aid to understanding all this, Santoro has written and published Philosoprops: A Unified Field Guide, a limited-edition illustrated guidebook, generously filled with her captivating personal stories leading the way through the worlds of art, philosophy, and science.

“I find that when I’m present in the gallery to tell the stories behind the works, they take on a vital performative dimension,” says Santoro. “When I can’t be on hand to demonstrate the Philosoprops, the Field Guide can serve as an entry point. Really, the objects are just artifacts of the ideas…once the ideas have been conveyed, the tangible pieces become less important.”

Santoro has been focused on the book for the entirety of 2013, with the exception of a large-scale solo show and series of “dialectic revival” discussions at Gasser-Grunert in New York City. Keep an eye out for Field Guide events, including a book launch at Marfa Book Company, later this fall.

Included in Santoro’s philosoprops is the materialization of an idea that has become her primary source of income and perhaps her best known invention: Sonic Fabric, woven from 50% audio cassette tape and 50% polyester thread. The idea for sonic fabric came full circle for her after seeing Tibetan prayer flags imprinted with mantras (sacred sounds), which reminded her of when she would go sailing as a child and watch the tell-tails on the boats. Her family made their tell-tales from cassette tape – a material that was tough yet light enough to respond to the wind. She imagined the wind could play the music recorded on the tape-tell-tails, sending music out into the world, just as prayer flags embody and emit good vibrations. 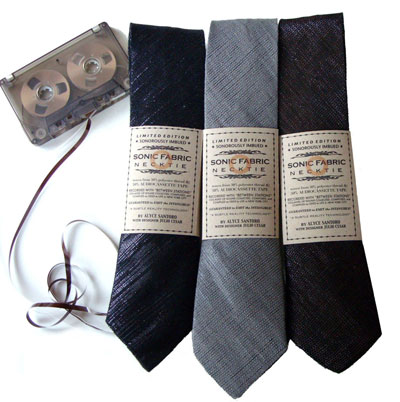 After experimenting with the weaving process, Santoro (with the help of a family-run textile mill in New England) has created a durable textile that can, in fact, be “played.” Simply running a tape player head over the fabric produces a gorgeous, garbled sound collage as the head transmits recordings from several strands of tape at once. Santoro has used Sonic Fabric to create Shaman-superhero dresses, suits of sails, and strings of flags and banners, even a custom dress for Jon Fishman, percussionist for the band Phish, which he wore and played on stage.

She also broke into the mainstream fashion world by teaming up with designer Julio Cesar to create neckties that contain sounds of New York City recorded after 9/11 and the musical note C-sharp, a tone associated with the yoga mantra OM and a reference to the idea of a universal primordial tone, a vibration that  forms the basis of all things.

Who knew that a necktie could create a “secret society of good vibes” that brings together technology, the sound artist, and the business world?