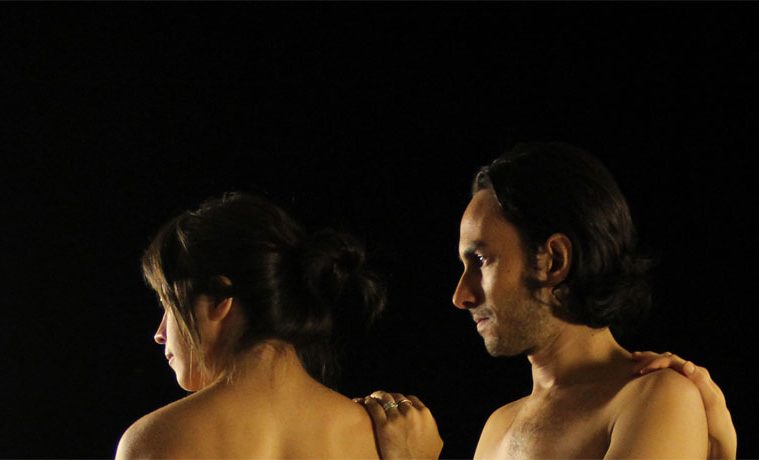 Perhaps it’s the white-walled museum, cult of authorship, or the sublime reverence that we ascribe to art that often justifies its exemption from a serious interrogation as to its means of production. Indeed, previous investigations as to the means necessary for the production of figurative art are short sighted if they neglect the labor of the model. 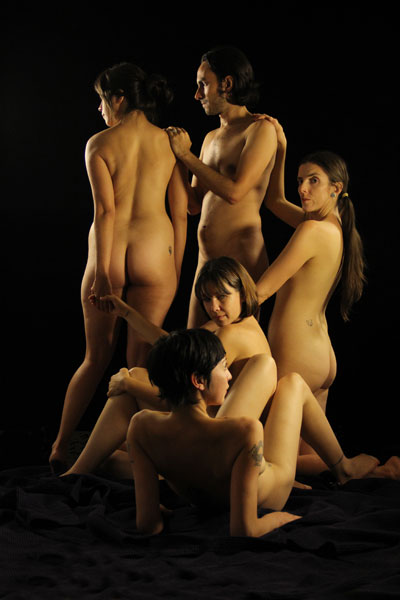 The space was arranged simply. A handful of artists were situated in the center like a supportive but easily forgettable orchestra. They were circumscribed by elevated wooden flats, unfinished and plainly illuminated by soft white light. Upon the tallest flat sat a sofa reminiscent of Venus of Urbino and Olympia. However, the throne-like sofa serves as an hommage not to Titian and Manet but to Victorine Meurent, the artist and model to whom Manet was indebted.

The work’s honest integrity was informed from the start by the lack of a separate backstage area. When the audience entered, the models were onstage, chatting naturally and stretching. To hide behind a curtain would degrade the essentially revealing nature of the work. Furthermore, the extensive pre-show warm ups hinted at the strenuous physical activity to come.

Upon entry each audience member received a sketch pad and pencil. The show began with a brief instructional video by Matt Stavrowksy, explaining the simple geometric forms and proportions necessary to draw the human form. In only 5 minutes, Stavrowsky demystified the craft of figurative art. Yet, he did not degrade the artist. Rather, he democratized him/her to such a degree that that everyone was, more or less, an artist.

Despite the lack of narrative structure, there was one clear antagonist: the clock. Models are constantly at war with the ticking clock. In one telling sequence, the models counted out a crescendo of increasing frustration as they hold the plank and other terribly uncomfortable poses. Clearly, each model has his or her own way of coping with the stress. Model Jen Brown prefers to count in a language of her own design, presumably so she doesn’t have to know where she stands, time-wise. Jorge Sermini finds masochistic pleasure in the discomfort of his pose.

Herein lies the untouched labor of art: the illusion of effortless suffering. Consider the bather crouched down in the back of Manet’s Luncheon on the Grass, then consider the last time you did squats. For Manet to record that leisurely motion, the model stood frozen, halfway between sitting cross legged and standing with her arm extended, for at least an hour. She was probably cursing Manet under her breath and wondering whether an artist or a model coined the phrase “suffer for your art”. While the artist enjoys the privilege of existential suffering, the models suffer in more tangible ways. The need to use the restroom, the contents of the pre-pose snack, and the time of the month are all pressing concerns when sprawling off the edge of a sofa, supporting all one’s body weight with one wrist, and smiling like nothing is wrong.

This inevitably raises the question: to what ends do the model’s painful efforts contribute? At this point we can easily rule out assisting the tortured masculine artist’s chase after truth and beauty. Instead, the model’s suffering sculpts an empowering sense of agency. Jorge Sermini says, “We are the subjects to be looked at.” Note that he doesn’t say “objects.” The model as subject displays a high degree of control over the present artists. If the model chooses the pose and sets the emotional tone, then the artist’s form and feeling are always to some degree pre-determined. Finally, the models’ awareness of their agency engenders an eclectic conception of the implicit meaning of a painting. To the model, the painting is merely proof of a shared moment between artist and subject. So, Olympia is not a record of an instant, but proof of a dialogue between Manet and Meurent. In the final monologue, we are invited to consider Starry Night not as the crown jewel of the white- walled museum, but as proof of Van Gogh perched up on a hilltop, thinking: this is worth painting.