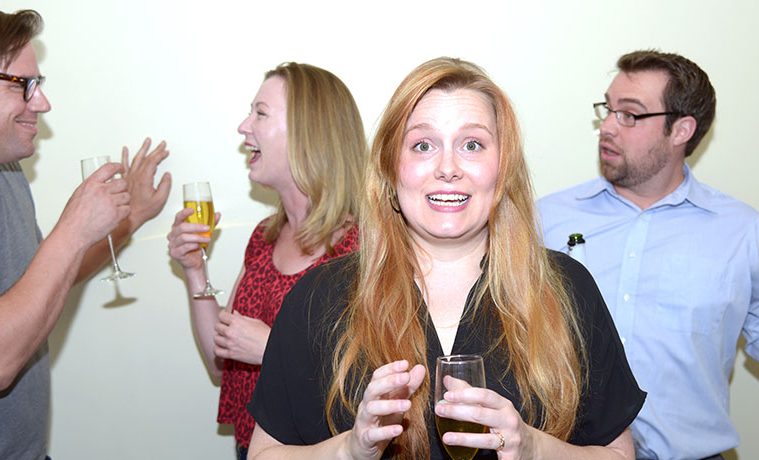 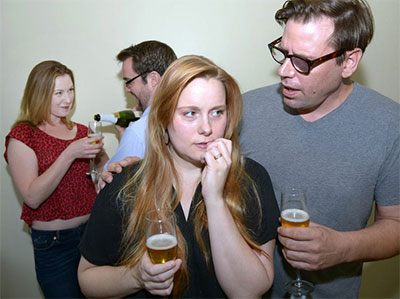 Horse Head Theatre Co., the Houston collective that comes out of hibernation once a year, is back again, this time with Abby Koenig’s Spaghetti Code, a dark comedy about the trials of infertility, July 12-28 at PJ’s Sports Bar. Horse Head’s new artistic director Jacey Little is directing, with founding member Kevin Holden at the design helm.

Spaghetti Code concerns a young couple, Milly and Tim, their sexy friend Stacy, and an infertility doctor, Phil, as they navigate the tricky territory of surrogate parenthood. The play draws its title from the name of computer source code that has a complex and tangled control structure. Koenig’s imagination went wild with the possibilities of a DYI surrogacy. “Hey, if we can pick the woman, why not pick someone with awesome genes?” says Koenig. “The play takes this concept to an extreme level.”

Crazy ideas come to those under stress and Koenig lets her characters become unhinged early on. “At its core, Spaghetti Code is about a woman who can’t have a baby, and I went through several years of struggle myself,” says Koenig, a new mother of twin boys. “And for me, and I think a lot of other women that I have talked to about this, you get to this point of utter desperation where you will do anything. Anything!”

Unlike her last Horse Head play, Your Family Sucks, Spaghetti Code has a more realistic edge. Not a stranger to stand-up comedy, Koenig peppers her script with crisp banter. Her fast-paced rhythms suck us into the scenario, first through humor, then through ambiguity. “I went into this play thinking, I want it to be funny and the audience is laughing and then, wait that’s not so funny anymore,” says Koenig. “Not everyone is going to like these characters, and certainly not the decisions they make, but not everyone in life is likable, nor do they make good decisions.” 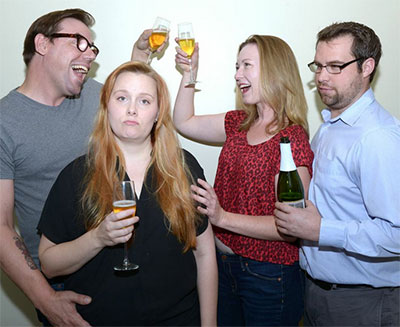 After several “men behaving badly” plays, Houston’s most idiosyncratic theater collective is presenting a woman centered, written and directed show. This is even more fun than Kevin Holden’s plan to do a play with the Roller Derby. Not so fast, says Little. She sees this play as much about men as women. “The idea that it takes a village to raise — or in this case to have— a child is a large element of Spaghetti Code,” says Little.  “The play explores women and men’s agency in the baby-making/pregnancy process. Abby’s play is hilarious, but it is also hard-hitting. The structure is sound and original.”

It was love at first read for Little. After a few meetings with the Horse Head team the ball was in motion. “I really don’t know what came over me other than the love of her story and my faith in her as an author — but I remember feeling like if I couldn’t see this play onstage I was going to die. Dramatic, I know,” muses Little.

With a cast that includes Horse Head veteran Drake Simpson, Ivy Castle, Mischa Hutchings  and Andrew Love, Koenig feels strongly that her work is in good hands. “Andrew told me everything he felt about the play and how it meant to him and the character before he was even cast,” says Koenig. “Jacey has done nothing but championed this play from the start; I know they are going to do a tremendous job.”

Like most Horse Head shows, they have to create the performance space. “Although it can be incredibly stressful, Horse Head’s commitment to utilizing found spaces excites me,” says Little. “We actively avoids structured seating and traditional theatrical spaces because we believe it produces a lethargic or apathetic audience.”

To that end, they have completely transformed the second floor performance space at PJs. “Our design concept is that the entire space is Milly and Tim’s home,” says Little. “The second floor is contained: it has a stage, bathrooms, and a bar. The space is intimate, so ticket sales are limited. Horse Head’s audiences are… drinkers. This venue provides affordable/cheap ass drinks, as Happy Hour prices will be available to our audiences.”

According to Little, a change is in the air that’s eroding Horse Head’s “boys club” reputation. “We’ve added a number of female company members, including myself, Abby, Ivy Castle, Ashleigh Painter and Leah Short — balancing us out to 5/5 F/M ratio for the first time in Horse Head history,” reports Little. “Under my leadership, Horse Head will remain true to their founding mission statement and aesthetics, but we are in a period of transition. Our upcoming July production marks a new age of Horse Head Theatre Company.”

Horse Head has a number of  new projects on the horizon. “Some are not plays at all, but rather ‘theatrical experiences,’” says Little. “These will be multidisciplinary endeavors incorporating live music, cabaret, installations, playful and performative audience activities, and of course will be spectacularly designed.”

As for Koenig, she’s turning her talents to writing a book, which she describes as “a  humor/memoir/self-helpy type of thing.” “It’s about the idea that, yes, having children is a blessing and a struggle, but it doesn’t mean you have to give up yourself. Anyway, I can’t find that book, so I thought I would write it for other moms like me.”

Little plans to be part of Horse Head for the long haul. Start a conversation with her on the subject of theater and plan to be there for a while. She’s one of the city’s most passionate and articulate dramaturgs. “As an artist, I’m interested in theater that makes you think – feel – question your perceptions of and assumptions about our world. I love the gray area between extreme joy and despair: moments when laughter and tears meet, when emotions overflow. I want to see theater that incites action. I want to see theater that I can’t leave in the theater after curtain call.”