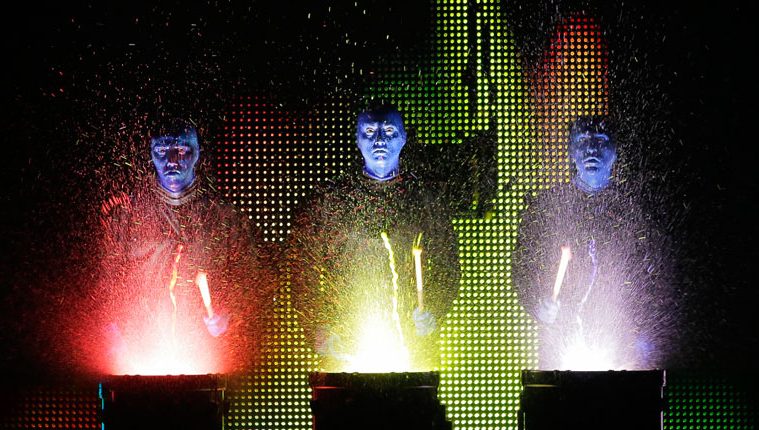 First came the trees, as in Konstantin Dimopoulis’ fabulous public art installation, The Blue Trees, now Houston finally has their own Blue Man. Houston native and Blue Man Group member Shane Andries got his BFA from University of North Carolina School of the Arts.  After a stint in Los Angeles, he got scooped up by weirdo music/theater collective known as Blue Man Group, where he has performed in multiple shows in New York, Boston, Orlando, and the National Tour.  Andries is back on his home turf for a Society for the Performing Arts Blue Man Group gig on June 4-9 at Jones Hall. He chats with A + C editor Nancy Wozny on life in the blue.

Arts + Culture: How would you describe Blue Man Group to a newbie?

Shane Andries: It’s comedy, music, art and the Blue Man character, in an atmosphere of excitement and joy.

A + C: The Blue Man character? Exactly who is this guy?

SA: He’s an innocent, a hero, a trickster, a shaman and a scientist, because he’s always experimenting.

SA: Five years, all over the world, and once on a cruise.

A + C: You have a very distinguished theater degree from North Carolina School for the Arts. Yet, you don’t get to use your voice as a Blue Man, as they are a mute species.  Is that strange?

SA: Yes, it was an adjustment. I have extensive training as a classical actor,   and have performed Shakespeare. But that said, I do get to draw on all the physical training I did at school. So much about acting is subtext, what is not said, and the interior monologue. Blue Man removes the text. It’s rooted in old school styles like Chaplin, Keaton and vaudeville.

A + C: I understand that you studied with the late and legendary Marilyn Miller at Cy Creek High School. She beat us year after year in the UIL one-act play competition. What kind of foundation did you get from her?

SA: I owe everything to Miss Miller. She helped me make the leap from sports to acting. My freshman year I played baseball and football. I didn’t start acting until my sophomore year, when I played Poppy in The Voice of the Prairie. Only in high school do you get to play an 80-year old man with an Irish accent.

A + C: Oh that’s so true and really sweet. What is the one piece of advice you remember from her?

SA: I loved her approach. She used to say that when you don’t know what to do, do something. And that’s indeed how we find our best choices that can culminate in an authentic performance. She was such a special person to me, and really cared about that part of my life.

A + C: I bet she would be really proud of your longevity as a Blue Man. What’s the hardest part of being one?

SA: The toll it takes on my body. I have to treat my body well to do this night after night.

SA: Well, I have long eyelashes so you can recognize me by them. It’s funny, when you put on the makeup your features stand out, but it also hides a lot. You look like a Blue Man, but also very individual.

A + C: I took my sons when they were 10 and 12, and they got to throw the cheese balls into a Blue Man’s mouth and be on the big screen. Do you still do that?

SA:  Yes, it will never go away, it’s our trademark. And they are marshmallows, not cheese balls.

A + C:  Oops, sorry about that. What do you do when you are not painted blue?

SA:  I just shot a film and we are in post-production. We will be hitting the film festival soon.

A + C: Will you get a chance to see The Blue Trees while you are back in Houston? You are the exact same color blue!

SA: Houston painted the trees blue for us?

A + C: Not exactly, but I love that you thought so. It’s a Houston Arts Alliance public art project by Konstantin Dimopoulis.