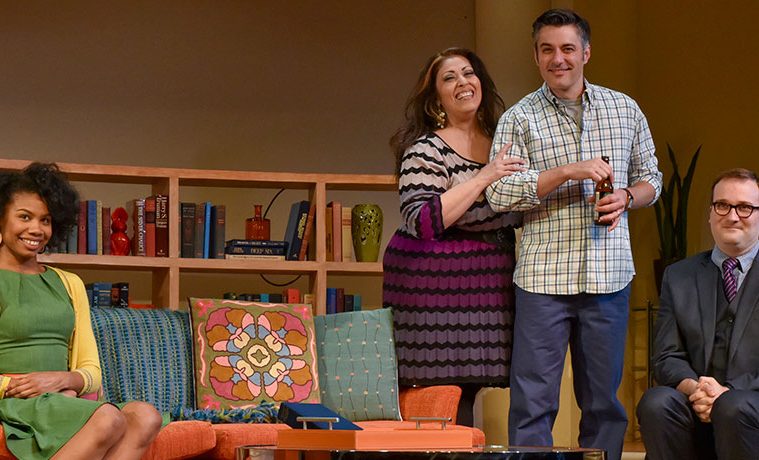 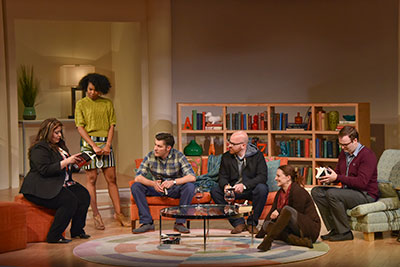 The discussion is continuous in The Book Club Play about whether pop entertainment can ever be considered classic literature. What makes the 1851 Herman Melville novel Moby-Dick a work of brilliance, while most critics dismiss the immensely popular works of Dan Brown or J.K. Rowlings? It’s an intriguing set-up, but one used mostly to mine laughs from a crackling cast performing Karen Zacarias’ play at Dallas Theater Center through Feb. 1 at the Kalita Humphreys Theater.

The premise is pure sitcom. Friends gather at the home of control freak Ana (Christie Vela) and her lapdog hubby Rob (Jeffrey Schmidt) on a monthly basis to talk books, nosh on Anna’s delectable hors d’oeuvres and jabber on about the virtues of life, love and other lofty ideas presented by each author. Attendees include Anna’s best friend, Jen (Sarah Rutan); former college boyfriend Will (Steven Michael Walters) and a young African-American girl Lily (Tiana Kaye Johnson), who works alongside Ana at a local newspaper. All characters seem to know their place and code of behavior when a knock at the door signals the arrival of an invited stranger, Alex (Brandon Potter), a professor of comparative literature whose fiancée abandoned him because he didn’t know who Edward Cullen was. 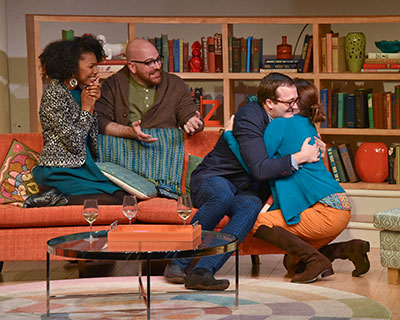 acarias adds a derivative plot devise that raises the stakes for the group as they agree to be filmed for a documentary on books clubs. Under strict orders from Ana to act realistic but only in a polished, fake way for the hidden camera, the group hierarchy is soon challenged with squawking, accusations and long-buried secrets shockingly revealed.

The laughs fly ferociously mostly because of fine casting. Vela is an ace with this type of material, she played a similar strong-willed character in DTC production of God of Carnage a few season ago. Her Ana is a complexity of strength, vulnerability and snobbery, and Vela can mine more laughs from a deep stare than most actors can from reciting a joke. Matching her stride, Walters revels in playing the buttoned-down Will, an educated man that nonetheless denies his true identity, instead favoring to posture and pose for his friends. And Johnson is a hoot as the innocent Lily, who is ill at ease with the pretentiousness of the group, but enjoys the camaraderie.

The hijinks play out against Daniel Zimmerman’s beautifully appointed living room set that shimmers with suburban affluence, and costumer Jennifer Ables cleverly changes the dress from chic contemporary to lazy casual as the group begins to unravel from it’s strict protocols.

No one will confuse The Book Club Play with classic literature or transformative theater, but for a lightweight comedy, it delivers an amusing two hours of mass appeal entertainment.