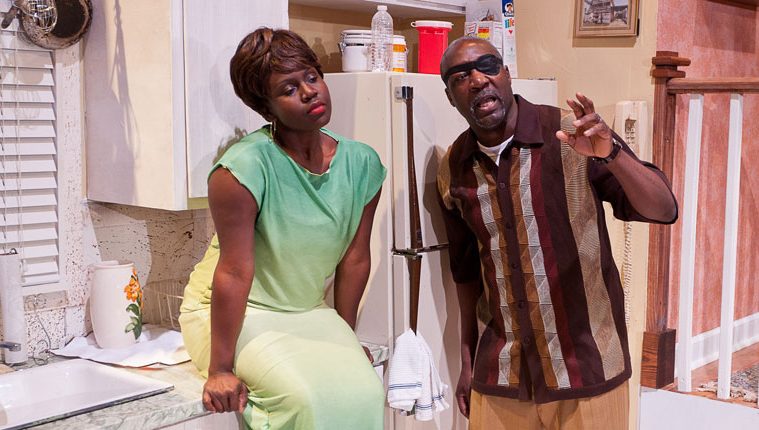 Autumn Knight and Broderick Jones in Broke-ology.
Photo Courtesy of the Ensemble Theatre.

Broke-ology is the science of being broke and trying to survive,” says Ennis King to his younger brother Malcolm in Nathan Louis Jackson’s absorbing Broke-ology, on stage at the Ensemble Theatre (through April 14). While that may be Ennis’ self-styled definition of it all, the play is much more about ways that we’re broke: monetarily, physically, psychologically.

Striking a somewhat darker tone for the Ensemble than might be indicated by its recent productions, Broke-ology tells the story of Ennis and Malcolm King, two Kansas City (Kansas) brothers who are dealing not only with the puzzles of where their lives are going, but also what to do about their deteriorating, Multiple Sclerosis-ridden father, William, who lately has been seeing the ghost of the boys’ mother, Sonia. Malcolm has come to the family home after receiving his master’s degree from a fancy Connecticut university and is taking a job with the EPA. But he feels coming home was a mistake. Ennis is working a dead-end gig at a restaurant and trying to figure out how he’s going to be a dad to his girlfriend’s baby. And William, who knows he’s at the end of his life, wants a way to continue on with some dignity, without impeding the success and dreams of his sons.

The struggles about what you want for yourself colliding head-on with the demands of life and family might approach melodrama, but here they are handled with deft assurance. Broderick “Brod” Jones’ portrayal of William is multi-layered and raw, and watching him descend from the strong head-of-the-household to a sometimes confused and weak but still proud man is a highlight. L.D. Green makes a stunning and strong Ensemble debut as Ennis, belligerent and angry one minute, scared and nearly sensitive the next. He’ll be one to watch, not only at the Ensemble, but on the Houston acting scene. As Malcom, Joseph  Palmore brings grit and intelligence to the young man’s struggle to stay or go. Autumn Knight’s Sonia offers a stabilizing force to these three men, and her interactions with Jones are deeply affecting.

Directed by Ensemble mainstay Eileen J. Morris, whose touch blends humor with humanity, Broke-ology unfolds with an edge. There’s always something just under the surface and Morris pushes her actors to find it. Careening along to its almost-inevitable end, this family-driven drama strikes any number of familiar chords. Janelle Flannagan’s set evokes a well-worn working class home, where dreams surrendered long ago to reality, and Kris Phelps gets props for lighting the whole thing with homey warmth.

The Ensemble has always excelled at telling great stories about great characters. With Broke-ology, it brings that storytelling to an entirely new level.