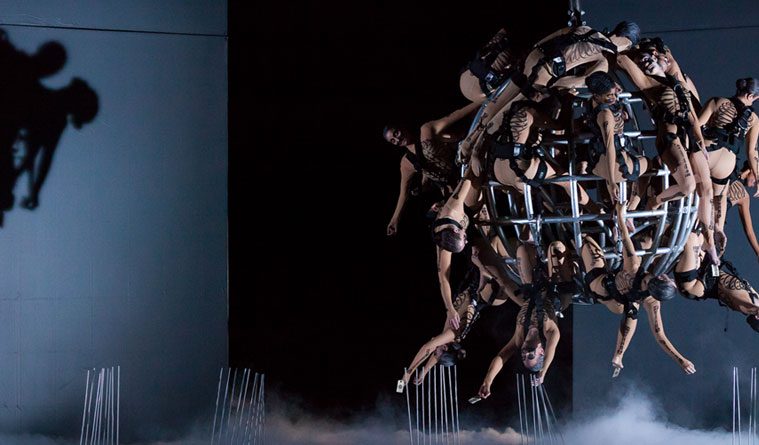 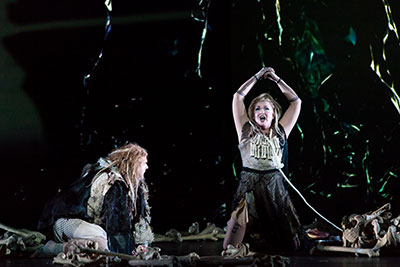 Simon O’Neill as Siegmund and Karita Mattila as Sieglinde in
Die Walküre  at Houston Grand Opera.

What a transformation. Houston Grand Opera‘s staging last year of Das Rheingold, the first drama of Richard Wagner’s The Ring of the Nibelung, had ended as gods wearing lustrous white stepped into a Valhalla that was embodied by aerialists suspended five layers high. The impish demigod Loge, foreseeing the troubles in store for Valhalla, had made his final wisecrack as he zipped around on a Segway.

All that was gone when Die Walküre, part 2 of the cycle, opened Saturday night at Wortham Theater Center. Now we stepped into the Stone Age. Animal bones ringed a fire. Siegmund and Sieglinde, the long-separated twins who reunite in Act 1, wore costumes suggesting animal pelts – accented in Sieglinde’s case by a bone brassiere. Sieglinde’s husband, Hunding, displayed all the charm of a cave man, ordering her around like a servant and keeping her literally on a leash.

But Walküre still bore the imprint of La Fura dels Baus, the Spanish theater company whose multimedia Ring, spanning epochs in its imagery, is making its U.S. debut in annual installments from HGO. 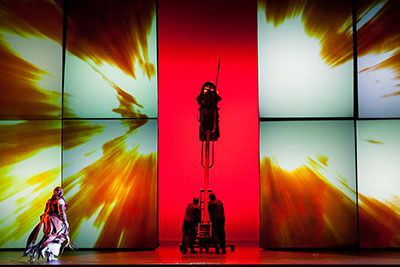 The 13-foot-tall video screens that depicted the heavens and the underworld in Rheingold now supplied a sprawling tree that glistened and turned as Act 1’s excitement built. When Siegmund and Sieglinde, carried away by newfound love, imagined their descendants, the tree became the symbol: The trunk glowed with the image of a DNA double helix, and Siegmund’s and Sieglinde’s spelled-out names coursed through the branches until the letters fell to the ground like world-nourishing fruit.

Love enters Wagner’s saga of gods and greeds in that scene, and as Walküre unfolds, brutality, moral indignation, sacrifice and regret join the epic forces at play. Though a few of stage director Carlus Padrissa’s theatrical gambits don’t pay off, his staging by and large embraces the story’s human impact as readily as its larger-than-life scope. Conductor Patrick Summers and HGO’s cast and orchestra bring out the lyricism and excitement that give Wagner’s score much of its emotional resonance, though Wagner’s gravity sometimes eludes them. 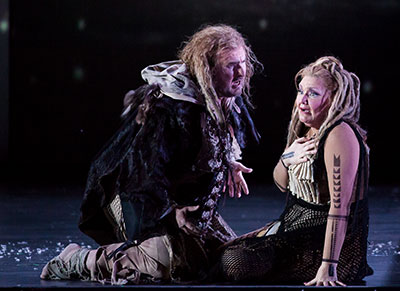 Trying to prevent Siegmund’s death is the life-changing mistake made by Brünnhilde, the warrior-maiden who appears in Walküre’s Act 2 and leads the Ring to its climax in The Twilight of the Gods. Soprano Christine Goerke brought the iconic role a voice whose heft and richness enabled Brünnhilde’s war cries to match Wagner’s orchestra for lustiness. 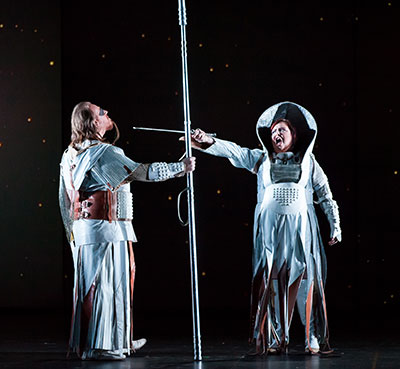 Yet Goerke was most compelling in the soulful episodes: Brünnhilde’s scene with Siegmund, in which she tells him he’s destined for death and Valhalla, then decides to try saving him; and the finale, where Wotan, Brünnhilde’s  father, banishes her for disobeying his command that Siegmund must die. Goerke treated Wagner’s music to a breadth and nobility that neither O’Neill’s Siegmund nor Iain Paterson’s Wotan had the sonorousness to match. In some of the gentlest spots, though, Goerke’s voice sounded unwieldy.

The resonance and ring of Paterson’s singing had lent dignity to Wotan, king of the gods, in Rheingold. But in Walküre, where Wotan’s plans begin crumbling and he’s driven by regret and rage, Paterson’s voice was too light to deliver the full force of Wotan’s torments. That was all clearer alongside the wallop that Wagner’s music gained from Goerke and mezzo-soprano Jamie Barton, who played Fricka, Wotan’s wife.

As Fricka, goddess of marriage, laid down the law to Wotan about punishing the incestuous Siegmund and Sieglinde, Barton’s exultantly red-blooded singing delivered some of Saturday’s most electrifying moments. And the finesse that Barton gave the role’s final, lyrical phrases helped drive home the point that Fricka was no mere battle-ax. 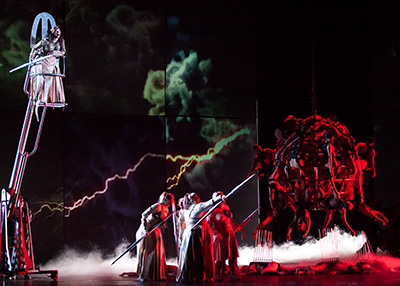 Weighty sound wasn’t the orchestra’s forte, particularly not in the case of the accident-prone brass section. That undercut the more majestic moments, such as the Brünnhilde-Siegmund scene evoking Valhalla. But the orchestra, led by Summers, provided a lyricism and vitality that helped keep Wagner’s unhurried storytelling alive. Not coincidentally, the performance clocked in at 4 ½ hours – 20 minutes less than the program booklet predicted.

Padrissa’s staging also helped animate the story. Alongside the multimedia spectacle, Padrissa sometimes turned to the time-honored art of physicality to add a theatrical frisson. As Fricka’s confrontation with Wotan fired up, she jabbed her riding crop in front of his face, then took his spear away from him – the ultimate symbolic power-grab. Though ancient rules of hospitality forced Hunding to give Siegmund shelter, Hunding nevertheless demonstrated his hostility by threatening Siegmund’s throat with a knife. The brute drove home his attitude toward his wife by dealing her out an occasional shove or a kick. 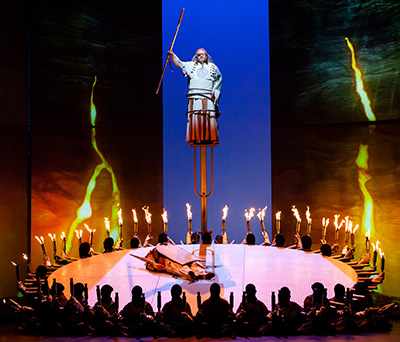 Some of Padrissa’s theatrical strokes didn’t work, though. After crouching and crawling for nearly all of Act 1, Sieglinde finally rose to her feet in her excitement about Siegmund, wobbling as if she had never walked. That strained credulity. And at the start of Act 3, Padrissa clumped dead war heroes bound for Valhalla onto a giant ball swinging above the stage. The spectacle won the audience’s applause, but the symbolism eluded me. Maybe the motif will return in one of the remaining operas, making sense among the next vistas La Fura dels Baus conjures up.