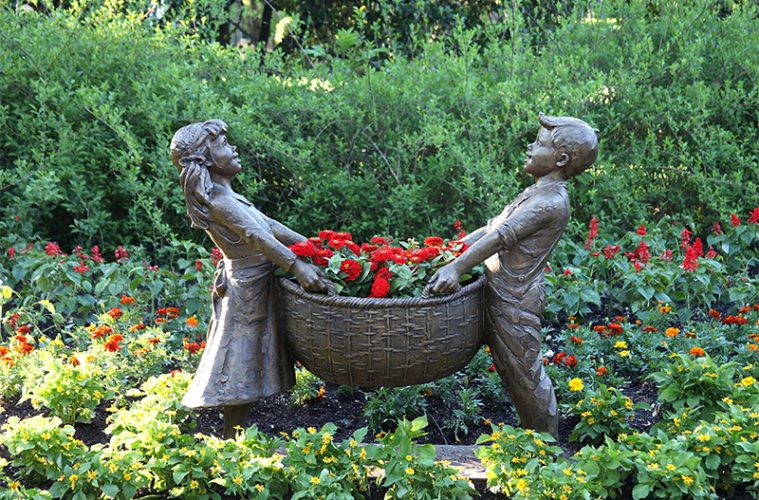 Well-behaved visitors to the Dallas Arboretum wouldn’t dare. But people who are sculpted in bronze can get away with a lot more, can’t they? So the exuberant children do cartwheels across a patch of arboretum lawn, inviting the rest of us to daydream about having such free spirits.

Cartwheel Kids and the young protagonists of 20-plus other sculptures frolic amid the greenery in Gary Lee Price’s Celebrate the Children, which livens up the arboretum through Oct. 15. The Arizona sculptor’s works join an array of permanent sculptures–including a few he also created–that complement the horticultural riches year-round. 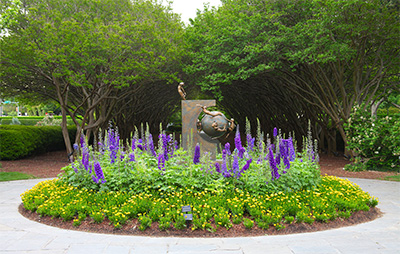 “It’s kind of like a floral gallery,” says Dave Forehand, the arboretum’s vice president of gardens. “Just like a museum puts pieces where they can best be viewed, the same thing happens in a garden–except the gallery happens to be live plants. It adds a lot more interest to the different spaces and garden rooms.”

A pair of sweethearts snuggle in the Jonsson Color Garden in the form of Italian sculptor Giacomo Manzù’s Grandi Amanti. The Harmony Repose Garden gains a second layer of serenity from Infinity II Wind Harp, a sound sculpture by Colorado’s Ross Barrable. After taking flight at the 1996 Atlanta Olympics, William Francis Duffy’s Trumpeters now soars above above the Pensive Poetry Garden.

Visitors craving a break as they explore the 66 acres of flora can plop down in the Jonsson Color Garden next to the Bard of Avon, who sits at one end of a bench in Price’s “William Shakespeare.” The work comes from Price’s 2016 arboretum show: Great Contributors, which featured life-sized sculptures of Benjamin Franklin, Abraham Lincoln and other icons.

“His sculpture is very approachable. He encourages people to touch and enjoy it–not just to stand back and look,” Forehand says. “The wonderful thing with all these sculptures of people is, (Price) really has a gift for bringing them to life. They seem like they have a spark.” 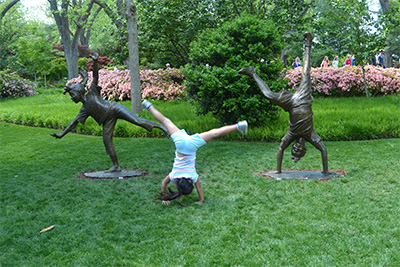 Celebrate the Children also invites visitors to join in. The ring of youngsters joined hand-to-hand in “Circle of Life” has a gap waiting for a viewer to fill it. Only then is the sculpture complete.

“I created a space in the circle, and it is fascinating to watch children interact with the piece,” Price’s artist statement says. “Quickly, they notice the gap and instantly clasp the two outstretched hands and complete the circle. … The circle that the children form represents the continuum of humanity. The clasped hands represent the interaction and cooperation, together with compassion and respect, which engenders humanity.”

The arboretum brings in a sculpture exhibition each summer, Forehand says, to bridge the gap between the springtime Dallas Blooms festival and Autumn at the Arboretum. The most popular so far has been the 2012 exhibition of glass sculptures by Dale Chihuly–the first outdoor presentation of a show that had first made the rounds of indoor conservatories. You can probably guess the first thing that veterans of Texas summers wondered about.

“‘What about hail in Texas?’” Forehand recalls people asking. Chihuly “was pretty confident that most of it was real tough. The first week after it opened, we had a pretty good hailstorm. … A few things broke, but they were the ones he thought might be a problem. Overall, it was remarkable how well they held up.” 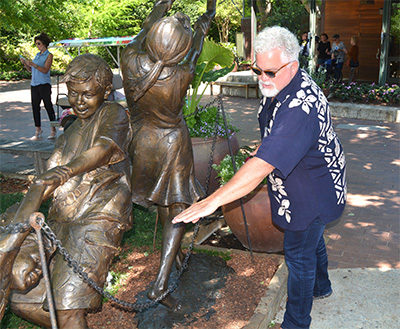 “That show was over the top. It was amazing,” Forehand says. “The glass was beautiful in the daytime in the sunlight. And in the evening, we opened up a second time. It was specially lit–the Chihuly people came in and lit it. We were selling it out every night.”

When Forehand imagines future summers, his “biggest and greatest wish” is to reprise the Chihuly show, he says. “I’m not going to give up on that.” Another prospect: Bringing back “Great Contributors,” which Price is expanding in his Arizona studio.

“Instead of sculpting even more historic gentlemen, he’s working on female historical figures. We kind of told him, ‘Maybe you need to do that,’” Forehand says. So far, “he’s got Amelia Earhart and Mother Teresa. And he’s just finishing Joan of Arc.”

In a blazing Texas summertime, the French martyr should be right at home.